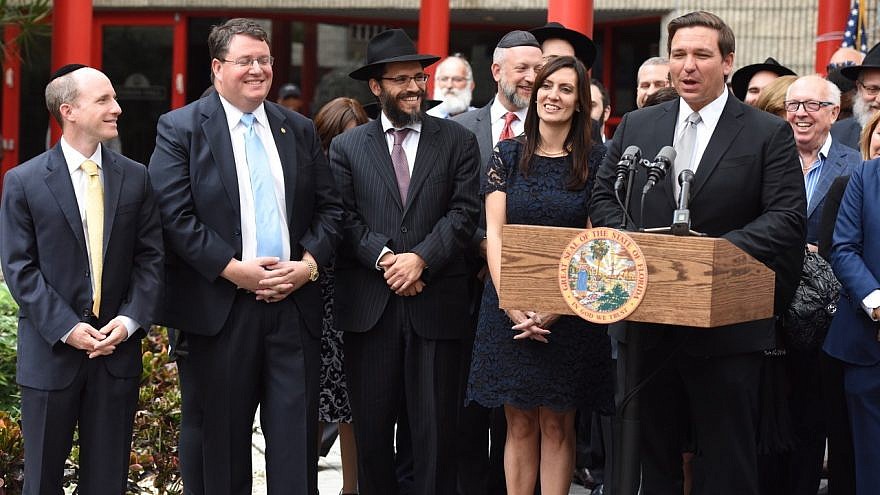 The governor’s office released a list of attendees on Wednesday. The official trip begins Saturday.

Florida Gov. Ron DeSantis speaks at a press conference at the Jewish Federation of South Palm Beach County in Boca Raton on Jan. 15. DeSantis spoke about sanctions against Airbnb unless it reverses its decision barring lodging listings in the disputed West Bank in the Middle East. (Bruce R. Bennett/Palm Beach Post via AP)

TALLAHASSEE — A historic visit to Israel by Gov. Ron DeSantis and Florida’s top elected officials will include nearly 100 people, a massive group of top-tier lobbyists, business executives, academics and state lawmakers, who will have extended opportunities to interact far from the public glare.

It appears this will be the first time a meeting of the Florida Cabinet will be convened abroad. The Cabinet is made up of the governor, Attorney General Ashley Moody, Chief Financial Officer Jimmy Patronis and Agriculture Commissioner Nicole “Nikki” Fried.

The DeSantis administration released information about the trip Wednesday amid increased scrutiny about issues such as who will take part, costs and how Floridians could watch the Cabinet meeting. Florida’s open government law requires that the public be able to both view and offer comments during public meetings.

DeSantis and members of the Cabinet will meet at 3:30 p.m. on May 29 — 8:30 a.m. Eastern Daylight Time — at the U.S. Embassy in Jerusalem. The event is expected to be live-streamed in the Cabinet meeting room in Tallahassee and on The Florida Channel.

An agenda posted on the Cabinet website includes a resolution on the state’s relationship with Israel and presentations on “victims of terror,” “water quality” and “emergency management.”

DeSantis said Wednesday he will also sign a bill (HB 741) to combat anti-Semitism during the meeting.

“That’s going to be a special moment,” DeSantis said.

Under the bill, Florida’s education system would add religion as a protected class regarding discrimination against students and employees. Currently, people are protected from discrimination based on race, ethnicity, national origin, gender, marital status or disability.

The signing, however, is not listed on the agenda, which also notes, “This agenda does not involve the composition of any collegial body consisting of the Governor and Cabinet as a board, commission, or otherwise.”

First Amendment Foundation President Barbara Petersen, who has questioned why a Cabinet meeting is being held more than 6,000 miles from the state Capitol, called the statement on the agenda “nonsensical” and “meaningless.”

“The Cabinet is a collegial body,” said Petersen, who represents a non-profit that includes the Tampa Bay Times and Miami Herald. “A meeting is any discussion of public business between two or more members of the Cabinet. I’m totally perplexed by this. But then, I’m perplexed by the whole notion of holding a Cabinet meeting in Israel.”

The list of those attending includes: Eric Silagy, president and CEO of the utility company Florida Power and Light; Mark Wilson, president of the Florida Chamber of Commerce; Margy Grant, the CEO of Florida Realtors and Scott Ross, a lobbyist for a long list of school districts, companies and the Israeli-American Coalition for Action.

A more detailed itinerary had yet to be released as of Wednesday, though Geller said it is “extremely busy.” He noted that attendees were not allowed to discuss the group’s specific plans because of security.

There are some perception concerns. Ron Book, a prominent Tallahassee lobbyist who is also the father of Sen. Lauren Book, said he is flying to Israel separately on the last day of the state mission, along with the senator’s husband and children for an extended visit on “personal time.”

“I try not to mix my stuff with her stuff,” he said. “I’m not going to the mission.”

Fried, who is also listed as bringing her boyfriend Jake Bergmann, a former CEO of medical marijuana company Surterra, has said she would be embarking to Israel ahead of the rest of the group. While most attendees will be leaving Saturday, she promised to complete her own trade mission first with meetings related to medical marijuana and blue-green algae research, for example, and join with the rest of the group later.

Patronis, for his part, will be focusing on “Holocaust restitution” to “bolster our efforts to unite Holocaust survivors or their heirs with unclaimed property here in Florida,” according to spokeswoman Katie Strickland.

The entourage includes several leaders of Zionist groups, like Morton Klein of the Zionist Organization of America, which advocate for Israel as a Jewish homeland and have taken hard lines against Palestinian groups. While in Congress, DeSantis was a staunch backer of Israel and a leader in the successful push to move the American embassy to Jerusalem, a move criticized by some for further stoking conflict.

The issues of supporting Israel and prime minister Benjamin Netanyahu have become more contentious in American politics as of late than any period in recent memory. A 2018 Pew Research Center report found that the partisan divide over sympathies for Israel versus Palestine is now wider than any point since 1978.

The trip, which will include stops in Jerusalem and Tel Aviv, promises to have a focus on higher education, as more than 20 representatives from Florida’s universities and colleges are listed as attendees. Many of them expect to sign formal agreements with Israeli institutions for research partnerships. Administrators or faculty from the University of South Florida, the University of Miami, Miami-Dade College and Florida International University President Mark Rosenberg are among those preparing for the trip.

Another aspect of the trip that remains murky is the cost. State leaders’ offices either did not respond to questions asking for an estimate of the trip’s expenses for the state, or said they could not provide a number at this time.

Many of the non-elected officials will be responsible for paying their own way, while Geller said his portion, which he estimated will be between $3,000 to $4,000, was being covered by the Legislature’s travel funds. A spokesman for Fried said her portion was being paid for out of agricultural marketing dollars.

Lauren Schenone, spokeswoman for the attorney general, said Moody’s flight is being paid for out of private funds through Enterprise Florida, the state’s job creation organization which counts many of the state’s largest corporations as investors.

The News Service of Florida contributed to this story.