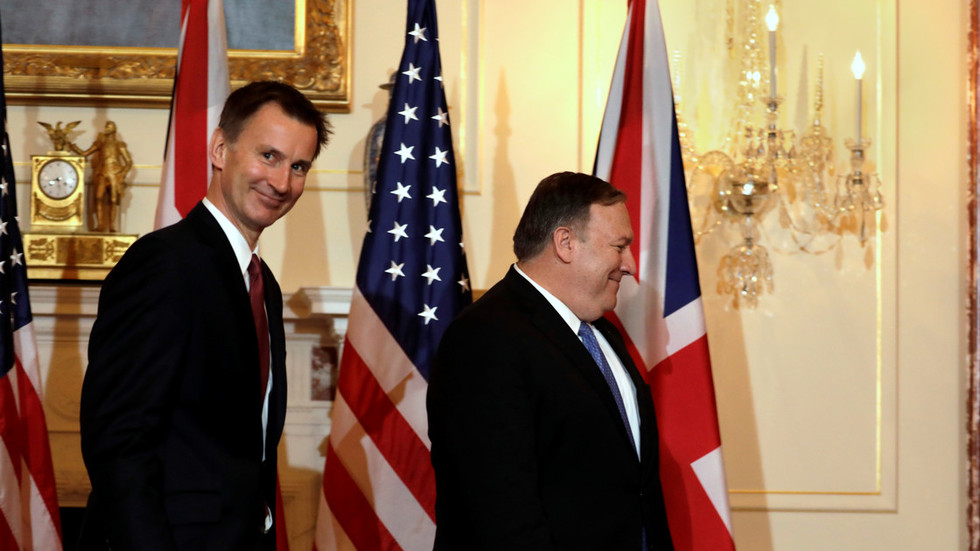 Britain will “stand by” its ally and consider offering military support if the Trump administration decides to go to war with Iran, Jeremy Hunt has confirmed — words from the foreign secretary that are unlikely to come as a shock.

With the US doing its level best to raise tensions with Iran, Hunt has revealed himself to be every bit the pathetic poodle of Washington that Tony Blair and ex-foreign secretary Jack Straw were in 2003 before the invasion of Iraq.

Campaigning for the Tory leadership in Scotland on Monday, Hunt pretended to be “very concerned” about the recent attacks on oil tankers in the Gulf of Oman, which he claimed were “almost certainly” the work of Iran. He offered no new evidence, of course — but then again, he didn’t need it; “instinct” had already told him that the Trump administration’s chief warmongers, John Bolton and Mike Pompeo, were telling him the truth.

US requests for military support would be evaluated on a “case-by-case” basis, Hunt said, adding that the British government wanted to “de-escalate the situation” with Iran. Readers might recall it was only last week that Hunt branded Labour leader Jeremy Corbyn“pathetic and predictable”and accused him of “incredibly dangerous … virulent anti-Americanism” for the sin of calling for de-escalation — so let the level of the foreign secretary’s sincerity be calculated with that in mind.

Hunt was right about one thing, though. Corbyn’s reaction was indeed predictable. When one million gathered for a massive anti-war rally at London’s Hyde Park in February 2003, Corbyn was there, making an impassioned and prophetic speech against the impending invasion of Iraq — a war in which he said there would be “no justice whatsoever” and which would “set off a spiral of conflict, of hate, of misery, of desperation” that would only fuel more terrorism.

"Dog Would Obey Owner" is not news. #Iran #JeremyHunt https://t.co/Tc4tCTAnVE

Sixteen years later, with one million dead in Iraq, a disastrously destabilized Middle East and jihadists running rampant across the region, the warmongering British elite are readying themselves to do it all over again — only this time, geopolitical and military analysts are warning, the results could be even more disastrous.

Britain’s instant, slavish support for the US’ flimsy narrative against Iran is even more pathetic when you consider that other usually staunch US allies are openly questioning Washington’s claims. Germany and Japan have both cast doubt on the Trump administration’s assessments, making room for Britain to confirm its role as the most reliable of US lapdogs once again.

There have been attempts in the past to whitewash Britain’s role in the Iraq war, with some eager to claim Tony Blair was tricked or “duped” into the conflict by Washington. Yes, Colin Powell iconically waved a vial of anthrax around at the UN in 2003, warning of Saddam Hussein’s non-existent WMD’s — but Blair’s government concocted its own set of fabrications. Blair was not tricked or duped, he was a willing architect, who enthusiastically spun lies for Bush.

The 2016 Chilcot report revealed that when then foreign-secretary Jack Straw was advised that the evidence against Iraq “would not convince” the public of an imminent threat, publication of the government’s intelligence report was postponed until juicier details could be dreamed up. Later, the Hutton inquiry revealed that Straw had been instrumental in “hardening up” the now-infamous “dodgy dossier” with what his private secretary referred to in a 2004 email as the “killer paragraph.”

That dossier, overseen by Blair spin-doctor Alistair Campbell, included the false claim that Iraq could launch a chemical weapons strike against Britain within “45 minutes.” When the BBC revealed that the document had been “sexed up” to convince the public to support the war, Blair’s government set about ruining the life of top weapons inspector Dr. David Kelly, the man who had revealed their deceit to the BBC. Kelly was later found dead, officially from suicide, though some still believe his death was suspicious.

Last year, in Iran, Jeremy Hunt warned that even a small confrontation could lead to a world war.

Today, he pretends not to understand why Corbyn is arguing against escalation. pic.twitter.com/i9ZSHw82mq

It’s at these moments when the public should be questioning why the men who got it so wrong on Iraq are swanning around still capable of commanding respect, while those who got it right are labelled unpatriotic and dangerous.

The warmongers — with ample help from the media — have been remarkably successful in preventing anti-war rhetoric from creeping into public discourse and becoming a “mainstream” view. Anti-war voices have been belittled and sidelined, because their voices represent the gravest danger to the elite. To hell with Iranian civilians, imagine how dangerous peace would be for the American and British weapons manufacturers.

Despite having no moral authority to do so, ministers are thinking of waging war on Iran.

Such intentions show something quite sick – whilst they claim there is no money for schools and hospitals, it seems that there is always enough for guns and bombs.https://t.co/v11oPGA5Yx

For now, Trump has managed to convince the media that he “doesn’t want war” with Iran — though whether he is sincere or not is another question entirely. The president who promised an end to pointless wars is quite clearly playing ‘good cop’ to Bolton and Pompeo’s ‘bad cop’ — buttering up the media and prepping the propagandized public to believe he did all he could to avoid conflict if one eventually comes.

Britain is playing along, slotting into its usual role as the supportive sidekick, ready to eat up whatever dodgy evidence Washington produces — and, no doubt preparing to concoct some of its own to go with it.