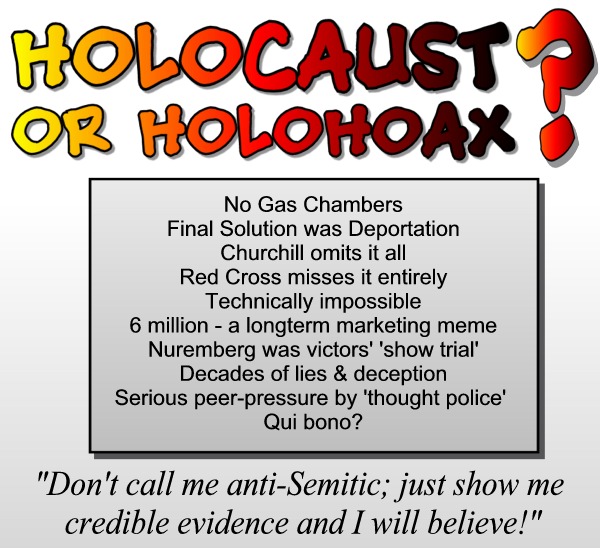 3. During this time frame, the Director of the Auschwitz State Museum, Dr. Franciszek Piper, announced that the so-called gas chamber there had been fabricated by the Soviets AFTER the war (as a propaganda device to keep the world focused on the evils of Nazi Germany while the Bolshevik communists continued to consume as much of Europe as they could). Dr. Piper’s statement is on videotape.

4. But there’s more. The International Red Cross, formally and officially reported that less than 300,000 internees of all nationalities in the German camps died of all causes, including old age. And of these, barely more than half were Jews. Most of these died in several severe typhoid epidemics caused by wartime conditions, which claimed many lives throughout Germany – including those of doctors, nurses and camp administrative personnel. (3)

5. Even these deaths were too much for the German authorities. On December 8, 1942, Heinrich Himmler, chief commandant of all detention facilities, issued an order stating categorically: “The death rate in the camps must be reduced at all costs.”

6. In all of German-occupied Europe there were 2.4 million Jews. After the war, 3.8 million Jews claimed “survivor” benefits from the German government.

7. It was a miracle. According to The New York Times of Sunday, January 4, 1987, celebrated survivor Elie Wiesel recalled “the day the Soviets arrived at Auschwitz.” However, in a speech to the National Press Club in Washington D.C., reported by the Jewish Telegraph Agency on April 11, 1983, he had a different recollection. (4) He noted that he was “one of the survivors liberated at Dachau by the U.S. Army” on April 15, 1945-and thus became the only prisoner of war to hold the distinction of being liberated from two different camps in World War II.

8. Not to be outdone by The Wiesel, famous “Nazi-hunter” Simon Wiesenthal died serenely at age 96, knowing that, according to BBC News, he had personally survived no fewer than 12 Nazi “death camps.”

9. In 1948, a story appeared about a hapless Jewish girl who was done in by the Nazis. It was written with a ballpoint pen, something that did not appear on the market until after the war. It was called “The Diary of Anne Frank.” This document remains highly controversial to this day.

10. So, where did this ‘SIX MILLION’ figure come from? For that, we must go back to one Ilya Ehrenburg (5), chief Soviet propagandist during the Second World War who later died in Israel. It was Ehrenberg who first coined the mystic number on Dec. 22, 1944 long before tens of thousands of Jewish internees in German camps, given the choice of staying to be ‘liberated” by the Communists or fleeing West with their German captors, did not hesitate to choose the latter option.

You are encouraged to do you own research on these and scores of other questions relating to World War 2 and the German concentration labor camps.

3- When the Red Cross interviewed thousands of freed camp inmates at the end of the war, asking whether they had witnessed alleged “gassings,” the response was universally negative. According to IRC document #9925, June, 1946: “The detainees themselves have not spoken of them.”

4- In his book Legend of Our Time, New York, 1982, The Weasel explained: “Things are not that simple, Rebbe. Some events do take place but are not true; others are – although they never occurred.”

5-The monstrous lies of this Jewish psychopath succeeded in creating a climate of rabid, anti-German hate which led to the death of millions. Here is a typical example of the genocidal daily fare served up to Soviet troops, taken from an Oct. 1944 leaflet to the Red Army: “Kill! Nothing in Germany is guiltless, neither the living nor the yet unborn. Follow the words of Comrade Stalin and crush the fascist beast in its lair. Break the racial pride of the German woman. Take her as your legitimate booty. Kill, you brave soldiers of the glorious Soviet army!”

“Regarding Anne Frank, evidence proves that the official folklore surrounding her diary is patently false and that she incidentally died of typhus. In depth research has also proven that Zyklon B was a disinfectant used to control massive epidemics.”

“The elite Zionists engineered the holocaust, in addition to their means, motives and agenda. The Zionist dark side includes their cooperation with the Nazis via the Transfer Agreement. In a very real sense, the original perpetrators of a holocaust were the Jews themselves.”

“These elite Jews crafted their own ‘holocaust’ of approximately 100,000 Jews—their own people—at the end of WW II so that the facilitation of a new homeland would be guaranteed. The finger of blame for the blood of these dead Jews can only be pointed in one direction—at the Jews themselves.”