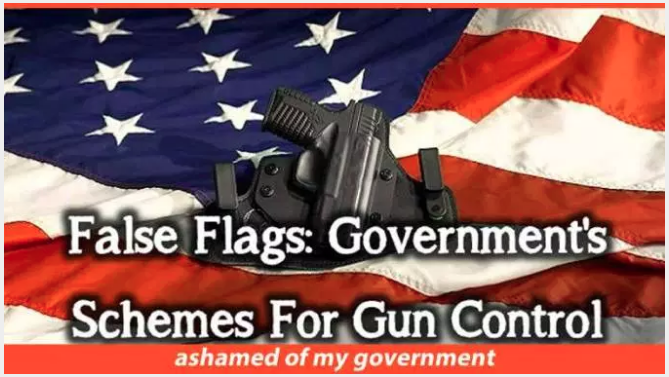 “… There’s nothing real about these mass casualty events (MCE); each one is staged to have maximum effects in specific locales and jurisdictions that are vulnerable to enacting draconian gun control legislation, especially the unconstitutional Red Flag Laws.  There is no other country on Earth that has nearly the number of senseless mass shootings — per capita — that have occurred in the USA. The increasing incidence of these fastidiously engineered MCEs ought to be a HUGE red flag about the WHO and WHY these black operations are being conducted as highly purposeful psyops. We are at a critical crossroads. The U.S. citizenry must respond to the incremental and intentional destruction of American society. ….”

“ …Whenever standing armies are kept up, and when the right of the people to keep and bear arms is, under any color or pretext whatsoever,prohibited, liberty, if not already annihilated, is on the brink of destruction.”

~ Henry St. George Tucker, quoted in Blackstone’s 1768 Commentaries on the Laws of England

“If the representatives of the people betray their constituentsm there is then no resource left but in the exertion of that original right of self-defense which is paramount to all positive forms of government.” ~ Alexander Hamilton, Federalist #28

“There exists a law, not written down anywhere but inborn in our hearts; a law which comes to us not by training or custom or reading but by derivation and absorption and adoption from nature itself; a law which has come to us not from theory but from practice, not by instruction but by natural intuition. I refer to the law which lays it down that, if our lives are endangered by plots or violence or armed robbers or enemies, any and every method of protecting ourselves is morally right.” ~ Marcus Tullius Cicero

Any government that does not trust its citizens with firerms is already a tyrannhy, or is plamnning on becoming one.  To wait until a government removes the means of resistance is, in effect, to surrender to that tyranny.

ROBERT STEELE: I am absolutely persuaded that every event in the US in the past several years has been a false flag event utilizing patsies and mind-controlled individuals. I am not certain that CIA has been behind these–this atrocity is now well over into FEMA and Blackwater domains.  What I am certain of is that the FBI is not doing its duty.  For example, in the case of the Fort Lauderdale shooter, he turned himself into the FBI in advance, said he had been subjected to mind control and was destined to enact an event, and they threw him out of their office.  Then when he did  the event, the normal protocol of shooting him dead on the spot was not followed, I do not know where he is today but I am pretty sure the FBI has not debriefed him properly, including mind-control debriefing protocols. Every element of our Republic is a failure today.  This breaks my heart.  I can only hope that our President is on track to take all these traitors down, and to eradicate the Zionist parasite from the USA, for it is the Zionist parasite that is — between Central Banking and control of our communications and computing and media and the destruction of our communities and families and genders — at the root of our failure.  After we eradicate the Zionists, and get an honest Congress, we can end the militarization of the police and make the Second Amendment the absolute law of the land.  Many state-level legislators and executives who have sold out to the Zionists and the Deep State can then be held to account via a reconstituted justice system that is not being mid-managed by pedophile judges and prosecutors under the control of the Zionists  and the Deep State.

34 Zionist Strikes (Zionism is Not Judaism)

BLOCKED BY AMAZON: Memoranda for the President on Sandy Hook Truth — Jeff Bezos and Amazon Must be Included in the Class Action Lawsuit