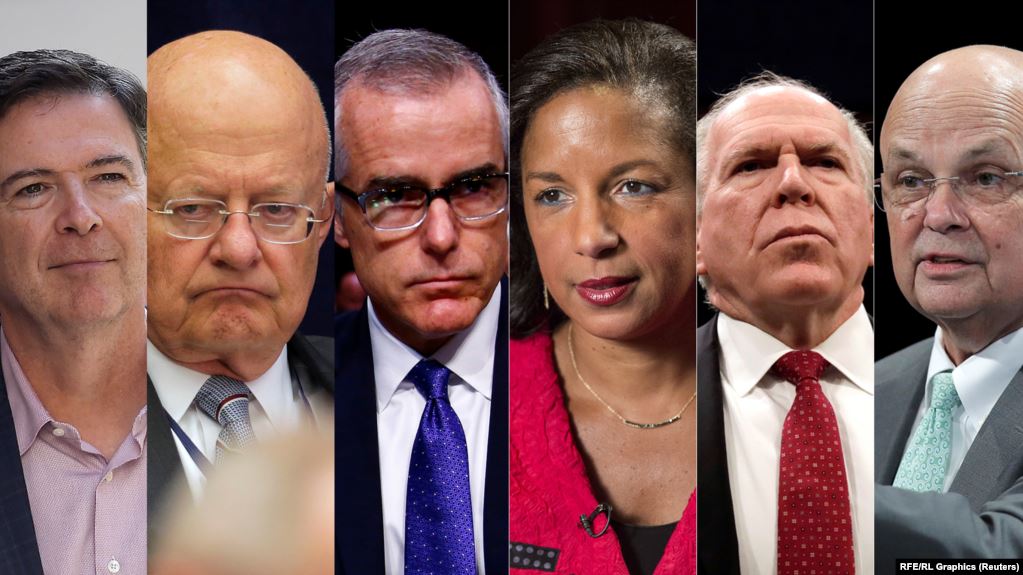 The skies are growing dark and increasingly ominous for dirty officials at the top of Obama-era law enforcement and intelligence agencies. Leading the “I’m really worried” list are James Comey, John Brennan, James Clapper, Loretta Lynch, and their senior aides, all political appointees. They expected Hillary Clinton to win in 2016 and bury any traces of malfeasance, just as they had buried hers. It didn’t work out that way.

Now they need protection themselves. House Democrats and anonymous leakers are busy providing it. Many are delicately called “current and former senior officials” by the New York Times, Washington Post, and other legacy media. Gee, I wonder who they are?

These defenders of the old guard are sliming Attorney General Bill Barr, who heads the investigation into their actions. They have good reasons, if not clean hands, for their attack. First, they want to keep as much secret as they can. Exposure can only harm them. Their main argument is that any disclosures will damage U.S. national security. Second, they want to paint the disclosures and forthcoming indictments as President Trump’s revenge, the illegitimate use of powerful agencies that should be nonpartisan. That, of course, is precisely what they are accused of doing.

Barr won’t be deterred. He did not return for a second stint as AG to pad his résumé or protect Donald Trump. He returned to clean out the Augean Stables. He needs to muck out the mess left by his predecessors and find the horses that left it.

Barr is determined to do that. He intends to find out how and why the Department of Justice embarked on an all-consuming, two-year project to investigate Trump’s alleged cooperation with Putin’s Russia to win the presidency. The investigation by Special Counsel Robert Mueller found no such cooperation (going well beyond saying he simply could not indict). Now, Barr wants to understand the origins of the probe and whether the tools used to launch it were lies or distortions — and were known to be so by DoJ, FBI, and CIA officials. Barr wants to know if U.S. intelligence agencies were used to spy illegally on Americans, or if they outsourced that to friendly foreign services and then recovered the information from them. He wants to know if the investigations really began in July 2016, as the FBI testified, or earlier, and what evidence was used to begin them.

None dare call it spying. At least no Democrats or Obama officials will. But that’s exactly what it was. As that master of the English language, Winston Churchill, put it, “Short words are best and old words when short are best of all.” That’s far too clear for bureaucratic obfuscators, presidential contenders, and their media allies. They prefer long, Latinate terms like “surveillance” and “surreptitious investigation.” Barr is effectively telling them to “pound sand.”

Over the next few months, the public will finally see what kind of malfeasance there was. At least they will see some of it. Some will remain classified to protect sources and methods; some will be released only after criminal charges are filed. The initial evidence will come from two sources: a major report by DoJ Inspector General Michael Horowitz, and the steady declassification of underlying documents by AG Barr, who was given that task by the president. Barr needed that authority because the FBI and intelligence community are resisting disclosure with all their institutional power. They fear years of abuse will be exposed.

Horowitz, a highly regarded career prosecutor, initially appointed by President Obama, will issue a public report and is virtually certain to make criminal referrals. The referrals will then be handled by John Durham, a skilled, apolitical U.S. attorney, who has successfully prosecuted major corruption cases for AGs in both parties. Apparently, he has already convened a grand jury. Another federal prosecutor, John Huber, has been working on related problems. Durham will coordinate, supervised by Barr.

These joint efforts will show whether there were good legal reasons to spy on Americans, whether the secret intelligence courts were given complete and honest information before they issued search warrants, whether top officials leaked secret information to the media, and whether U.S. intelligence agencies (which cannot legally spy on Americans) evaded that restriction. They may also show if outside contractors illegally tapped into classified databases and spied on American citizens, including political opponents.

These are very serious charges, and, if proven, serious crimes. What makes them worse — far worse — is that they may well be connected to each other. If they are, they would represent a high-level conspiracy by government officials, appointed by one party and directed at political opponents during and after an election.

This assault on democracy has not been proven, but the evidence emerging in dribs and drabs strongly suggests the possibility. If it is proven, and if the Obama White House was directly involved, as some FBI texts plainly say, the scandal would be one of the biggest in American history.

How big? Big enough that major news organizations, which always favor transparency (“Democracy Dies in Darkness”), are now deeply troubled by the release of any secret documents. They know the stakes are too high and transparency too dangerous for their side, politically.

Right now, we don’t know how big the scandal is, how extensive the coordination was, and how far up it went. But we certainly need to know, just as we needed to know if Donald Trump won the presidency by cooperating with a hostile foreign power. He did not, according to the Mueller report. Now, we need to know if the U.S. government itself worked secretly and illegally to prevent his election and, when that failed, to damage his new presidency. That conspiracy would be equally serious, and for the same reasons. It needs to be rooted out, exposed, and punished.

The fundamental problem was identified by James Madison, who led the drafting of our constitution. “In framing a government which is to be administered by men over men,” he wrote in Federalist Paper 51, “the great difficulty lies in this: you must first enable the government to control the governed; and in the next place oblige it to control itself.” Under Comey, Lynch, Brennan, and Clapper, under Obama and Biden, it failed to control itself.

Over the next few months, we will learn the extent of that failure. We will see if top officials misused their agencies to investigate and crush their political opponents. Constitutional democracies cannot permit that. They cannot wave it off as yesterday’s news and expect to survive unscathed. If undetected and unpunished, it will happen again to another party, another candidate.

As the evidence comes out, a hard rain’s gonna fall. The damage will be compounded by partisan divisions, corroding trust in our basic institutions, and an impending election. For democracy’s sake, let’s hope the bitter winds are not a Cat-5 storm.