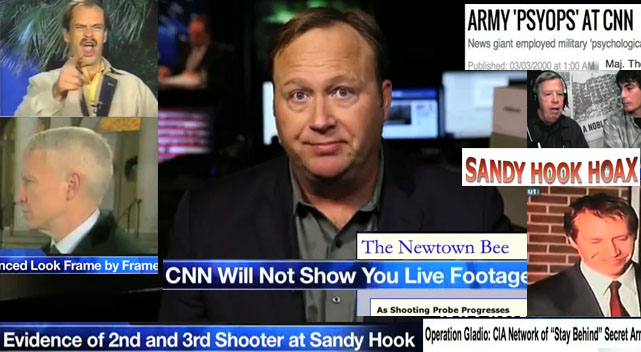 James Fetzer: In Solidarity with Alex Jones – How We Know Sandy Hook Was A FEMA Drill, Nobody Died, Obama Officials Confirmed It Was an Anti-Gun Propaganda Exercise

James Fetzer: How we Know Sandy Hook was a FEMA Drill for Gun Control where Nobody Died

The nation over which you currently preside has been subjected to an on-going series of staged shootings, most of which—for maximal emotional effect—have involved the reported deaths of children, none more dramatically than the Sandy Hook Elementary School shooting in Newtown CT, on 14 December 2012, where Adam Lanza was alleged to have killed 20 first-grade children and six adults. But there were boundless anomalies here from the beginning, where even (what would have been thought to be) an innocuous photo of the parking lot gives the scam away.

Notice, in particular, the absence of familiar blue-and-white signage for handicapped parking, mandated by the Americans with Disabilities Act. Because this parking lot does not have such special parking, the school was not in compliance with the ADA and therefore cannot have been legal open in Connecticut in 2012. We have photos of entrances and exits no wheelchair could navigate, including a wooden staircase with a steel rod extending, which could pop out the eye of a little kid running toward the building. Sandy Hook Elementary was not an operating school.

Moreover, because it was a 28*F ground temperature day, the school could not have housed students without heating the building; but there is no heat or steam rising from the structure, no doubt because it appears to have been closed by 2008, the furnaces were rusted out and dysfunction from lack of use. Notice the center rows of cars are all parked facing the school, which violates the driving instructions to turn right, curl around and park facing away. It was just too convenient to bring them in as props in a single line and put them in place, two-by-two.

When I published NOBODY DIED AT SANDY HOOK (2015), with fifteen contributors (including six current or retired Ph.D. college professors), we proved the school had been closed by 2008 and there were no students there. One contributor, Paul Preston, who had run drills for school systems as an administrator in the past, was so bother by what he observed being reported that he reached out to his contacts in the Obama Department of Education, all of whom told him that it had been a drill, that no children had died and that it was done to promote gun control. [PBI Emphasis Added.]

The book includes two chapters with 50 photos each, Ch. 7 of furnishing an empty house to serve as “the Lanza residence”, Ch. 8 of refurbishing the school to serve as the stage for the 2-day FEMA exercise, where we even include the FEMA manual as Appendix A. One photo in Ch. 8, Exhibit 26, shows (what we initially took to be) a SWAT vehicle present before the shooting had taken place—which is provable because the windows of Classroom 10, which would be shot out after the event, are intact. The flag is at full mast and, when you track down the staff, Wayne Carver, Medical Examiner, is patiently awaiting arrival of his portable mortuary tent.

When the book was banned less than a month after having sold nearly 500 copies, I released it to the public for free as a pdf, where anyone can download it to their own desktop by entering the title in their browser. When Infowars.com reported the ban, they featured Exhibit 26 even more clearly than in the printed book. But it was taken down about 38 minutes later after 178 comments, no doubt because of image credit to CONNECTICUT STATE POLICE, which William Powell had discovered had documented their own participation in the scam in their own files.

Among oddities of the press conference held by Wayne Carver, which James Tracy documented in his brilliant expose thereof, was that they did not allow the parents to see the bodies of their children but instead identified them using photographs. That was a violation of CT protocols but appropriate under the circumstances, since it turns out that the children were fictions who only existed in the form of photographs. “Noah Pozner”, shown here, for example, was made up out of photos of his “older step-brother”, Michael Vabner, which we have confirmed multiple ways.

Kelley Watt had over 100 hours of conversation with “Lenny Pozner”, who purports to be his father and who sent Kelley a death certificate for “Noah” as proof that he had died, which we included in the book. It turned out to be a fabrication, with the bottom half of a real death certificate and the top half of a fake, with no file number and the wrong estimated time of death at 11 AM, when “officially” the shooting took place between 9:35-9:40 that morning. Mona Alexis Pressley has now shown that “Lenny” is actually Reuben Vabner, Michael’s father.

Indeed, it appears that some of the “parents” may have used photos of themselves as children to perpetrate this highly-successful fraud upon the public. Without the complicity of the media and local, state and federal authorities, a scam of these dimensions could not have successfully been foisted upon the public—which continues as “Lenny Ponzer” and other fake parents are deceiving the Court by offering false testimony and concealing their identities in their suits against Alex Jones. Sandy Hook was faux terrorism to manipulate the public and promote the Obama administration’s political agenda.

Jim Fetzer, a former Marine Corps officer, is Distinguished McKnight Professor Emeritus on the Duluth Campus of the University of Minnesota. He co-founded moonrockbooks.com with Mike Palecek, when they discovered amazon.com was banning their books. He has published widely on conspiracies, including “False Flags on Five Fronts: Sandy Hook, Boston, Charlottesville, Las Vegas and JFK”, “How to Spot a ‘False Flag’: A Sampler of Representative Events”, and “The Parkland Puzzle: How the Pieces fit Together”, at 153news.net, BitChute, real.video and other secure sites.

Phi Beta Iota: We have no direct knowledge but believe the perspectives assembled by Dr. Fetzer are so important to the protection of the 2nd Amendment that we have agreed to post a series of Memoranda to the President on this event. Like 9/11 Sandy Hook appears to have been a false flag attack. If the President is to win his fight with the Deep State, he must use the truth about 9/11 and the other domestic false flag events sponsored by Bush-Cheney and Obama-Biden to show the American public that most of what they are being told by the government and the complicit media is a lie. This applies as much to Fox News as to Crap News Network — Fox News is pulling its punches and not serving the President or the public as it could.