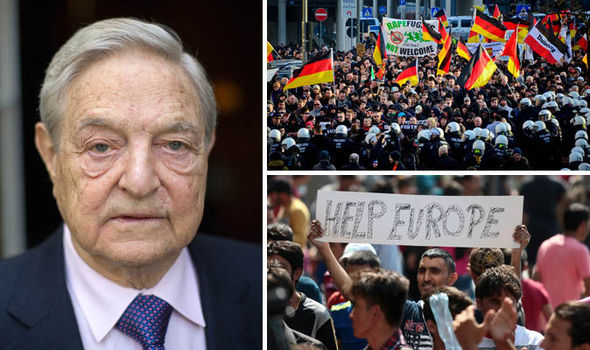 Brussels Shows Its Fear of Euroskeptics

Hungarian Prime Minister Viktor Orban has been under fire from the European Union for years for his opposition to German Chancellor Angela Merkel’s open immigration policy.

A policy which she herself has had to pull back on. And no matter how far Merkel has changed her stance and acceded to the reality of the damage her policy has created, Orban is still guilty of the sin of non-compliance.

Actually, he’s guilty of a whole lot more than that. Because Orban has not only stepped on the third-rail of European politics he’s stomped up and down while taking a massive dump on it.

That third-rail, of course, is naming names. Naming the very person who controls so much of EU policy through his co-opting large swaths of the European parliament.

That person, of course, is George Soros.

Now there is a push, ahead of May’s European Parliamentary elections, to kick Orban’s dominant Fidesz party out of the European People’s Party (EPP), a nominal center-right coalition and the largest single party within the EU parliament.

And with each victory over Soros Orban grows even bolder. After a successful re-election campaign predicated on the slogan, “Don’t Let Soros Win,” Orban has banned Soros’ major NGO, Open Society Foundation, as well as forced out his Central European University.

But his biggest sin was equating outgoing European Commission President Jean-Claude “When things get tough you have to lie” Juncker with Soros’ attempts to weaken Hungary’s border.

His reward for this, and building a border fence which thwarts Soros and Merkel’s tactic of tying immigrants in the host country in legal limbo for years by being inset from Hungary’s actual border, has been an Article 7 procedure opened up against Hungary for not abiding by the EU’s position on human rights.

Poland is in similar hot water with Merkel but thanks to one of the few reasonable things within the EU’s framework, each country can use the other to veto the actual censuring and concomitant removal of voting rights within the Union that comes with the full application of Article 7.

But this article isn’t really about Orban’s latest troubles with the faux democrats within the EU parliament. It’s about how scared those people are of the rise in Euroskeptics like Orban across the continent ahead of May’s elections.

Orban’s potential expulsion from the EPP is just another symptom of this fear. Recently, France’s Marine Le Pen, found out that the trial against her for tweeting out images of ISIS beheadings back in 2015, will go forward with the potential of landing her in jail for three years.

This is not much different than the kidnapping charge Sicilian prosecutors tried to bring against Italy’s Deputy Prime Minister, Leader of Lega and all-around bad boy Matteo Salvini in Italy. This was a lame attempt to split Italy’s Euroskeptic coalition and keep it focused on internal trivialities versus mounting a real challenge in May’s elections.

The same is true now for Le Pen. Her National Rally party is polling within the margin of error of President Emmanuel Macron’s En Marche with a real chance to send a plurality of French Euroskeptic MEPs to Brussels in a couple of months.

Merkel is struggling with the same thing. And even though support for Alternative for Germany (AfD) has waned in recent polling, down to just 13%, don’t underestimate the voters’ desire to send a strong message to Brussels by voting in stronger numbers for the new or alternative parties rather than how they would vote for them at home.

We’ve seen this in the past with UKIP who shocked everyone in the last European elections in 2014 with the size of the vote for them. It never translated into domestic momentum as typical prisoner’s dilemma concerns are more prevalent in Britain’s majoritarian voting system.

But for the EU parliament where the two-party system doesn’t hold sway and the direct benefits are harder to make a case to voters for, it’s much more likely voters will loosen up a little and throw their support for a smaller, less established party.

And that, along with some serious miscalculations about Brexit which I’ll get to in a minute, has the power elite in European political circles very scared. So scared that they are willing to devote serious resources in Quixotic endeavors of dubious value.

Expelling Orban from the EPP will only give him more strength. It will only give Euroskeptics more ammunition. Orban, like Salvini, revels in being the outsider. He’ll use it to rally others across Eastern Europe and pull a few more seats into that orbit.

According to the latest polling, which you can find an up-to-date tally of here, Euroskeptic parties will take between 215 and 225 seats out of the 705 up for grabs, assuming Britain actually leaves and doesn’t stand for MEP elections, which at this point doesn’t look likely.

If reports are true that Prime Minister Theresa May cut a deal with Merkel in July of last year on the withdrawal agreement. And if that agreement was structured so as to ease the way for the U.K. to rejoin the EU later are true, then there is no way Mrs. May will be able to forestall Brexit on WTO terms at this point, even if it takes another 90 days to do so.

A report from the Bruges Group, since taken down, had the details (see link above). And we’ll know if this is the case if suddenly Theresa May agrees to step aside as Prime Minister just after March 29th whether or not Britain leaves.

Because she will have either failed to scuttle Brexit and be sacrificed to save the Tories. Or she steps aside for a true Brexiteer in the event of Parliament voting for an extension.

We’ll know this was the case if she does so.

Lots of ifs, I know, but right now everyone is doing the Juncker-Two-Step, lying and cajoling to maintain the status quo and continue forward towards further European integration.

Mario Draghi at the European Central Bank did his part, going full dove for the rest of 2019 to keep markets from imploding.

And if Brexit is settled on WTO terms that opens up their worst nightmare going forward.