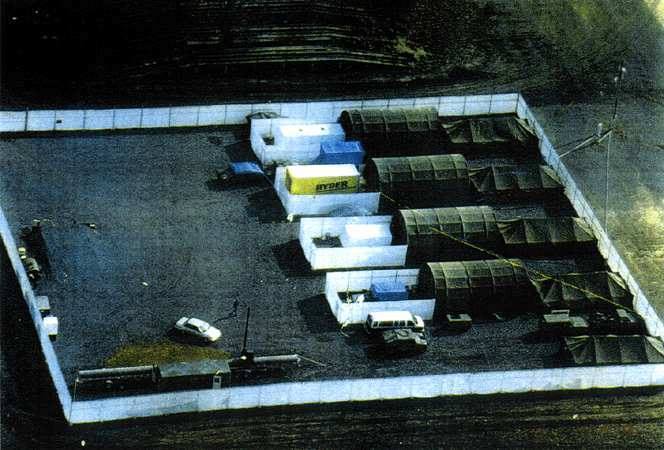 CAMP GRUBER. THE PLACE WHERE THE ISRAELIS AND THE ATF MADE THE BOMBS THAT WERE USED IN THE OKC BOMBING. LOCATION WAS BEING WATCHED BY THE OKLAHOMA HIGHWAY PATROL. THAT IS WHO TOOK THIS AND MANY OTHER PICTURES FROM THE AIR BEFORE THE BOMBING. DID YOU NOTICE THE YELLOW TRUCK? LIBERTY1775   — JE

New documents released under the Freedom of Information Act confirm that the FBI received a phone call the day before the Oklahoma City bombing warning that the attack was imminent, and that the feds tried to reach a deal with bomber Terry Nichols to take the death penalty off the table if he admitted making the call.

The documents were released to Salt Lake City lawyer Jesse Trentadue, who in the course of of a 15 year battle in trying to ascertain why his brother was tortured to death during an FBI interrogation related to the case, has all but proven the attack on the Alfred P. Murrah Building was an inside job run by FBI agents who were handling Timothy McVeigh.

“What that indicates to me, there is a record somewhere of that phone call and the FBI needs to explain it,” said Trentadue in an interview with KTOK News. “If the call was from one of their informants with McVeigh, clearly, they had knowledge of the bombing and didn’t stop it.”

The feds’ attempt to make Nichols accept responsibility for the phone call occurred in 2005 after Nichols was visited by an attorney named Michael Selby who claimed he was working for the government and would guarantee Nichols was spared the death penalty if he played ball in covering up FBI foreknowledge and involvement in the bombing plot.

“This was the first I had ever heard of such a telephone call having made made,” said Nichols in an affidavit filed recently in Utah U.S. District court. “And I told Mr. Selby that as well as the fact that I had not made that telephone call.”

Selby also tried to get Nichols to reveal the location of a box of explosives that the FBI failed to find during an initial search of Nichols’ home in 1995.

“He was fearful the FBI would come into possession of it and then no one would ever know who else was involved,” said Trentadue. “And his fears proved true because the FBI apparently found out about the box of explosives hidden in the basement (of the Nichols home) and got the box.”

McVeigh and Nichols’ fingerprints were found on the box, along with the fingerprints of at least two other individuals whose names were redacted by the FBI.

“Trentadue believes the government was desperate to reach the box before Nichols could make its location known to Homeland Security rather than the FBI. The attorney says it would have shown others were involved as government informants in the bombing conspiracy,” reports KTOK.

“When you look at these documents, that this was being monitored, this search for the box of explosives at the highest levels within the Department of Justice, right up to and include the White House I think, I mean, this wasn’t your local FBI office handling this. This was being run right out of the main justice in Washington D.C,” said Trentadue.

Lawyer Jesse Trentadue has embarked on a fearless campaign to uncover the truth behind his brother’s death, and the evidence that he has gathered in the process clearly indicates that the FBI have been killing witnesses who have direct knowledge of the fact that the Oklahoma City bombing could not have gone ahead without the aid of FBI informants and that the government had prior knowledge of the attack on the Alfred P. Murrah building at least four months in advance.

Trentadue’s evidence points to the fact that federal agents killed his brother because they mistook him for Richard Lee Guthrie, a member of the Midwest Bank Robbery Gang that included McVeigh and had been robbing banks before the attack. Guthrie was found hanging in his cell while in federal custody a day before he was due to give a confessional interview about the Oklahoma City bombing.

Trentadue said he believes Guthrie was John Doe 2, McVeigh’s accomplice in carrying out the attack on the Alfred P. Murrah building and an individual seen by multiple eyewitnesses yet omitted from the official story by the authorities.

Current Obama administration Attorney General nominee Eric Holder was also involved in the cover-up of Trentadue’s brother’s death, sending Department of Justice emails concerning the need to keep a lid on what was dubbed “The Trentadue Mission”.

In February 2007, Trentadue obtained an astounding declaration from Nichols in which he fingered FBI agent Larry Potts as having directed McVeigh in carrying out the attack.

In addition, Nichols’ description of the bomb he helped McVeigh build does not match with official accounts of the device used in the attack, lending further credence to evidence that strongly suggests only bombs planted within the Alfred P. Murrah building, which were initially reported by TV news stations, could have caused the damage inflicted.

Former FBI Terrorist Task Force director Danny Coulson, the man who was in charge of collecting evidence from the Alfred P. Murrah building, has called for a new new grand jury investigation into the bombing in order to identify FBI informants who were involved in the plot.

– In a 1993 letter to his sister, McVeigh claimed that he was approached by military intelligence and had joined an “elite squad of government paid assassins.” McVeigh often contradicted himself and changed his story on a whim to fit in with the latest government version of events. Is the Camp Grafton footage evidence of McVeigh’s enrollment in such a clandestine program?

– Multiple reports of Arabs at the scene assisting McVeigh were ignored and surveillance tapes were withheld under national security. The likely reason for this was the fact that Bush senior and Clinton were responsible for bringing in nearly 1,000 Iraqi soldiers captured by U.S. forces during the 1991 Persian Gulf War, some of whom were involved in the bombing.

– The FBI claimed McVeigh scouted the Alfred P. Murrah building weeks before the bombing and yet on the morning of the attack he stopped at a local gas station to ask directions, lending credibility to the new claims that he was being controlled by other conspirators and that the target of the bombing had been changed.

– Original reports of two explosions and several failed devices being defused by bomb squads were buried by the establishment as the official explanation that McVeigh acted alone was pushed. Scientific analysis conducted by General Benton K. Partin revealed core columns were blown out from within the building and the extensive damage to the Alfred P. Murrah building was completely inconsistent with the explanation of a single and relatively weak fertilizer truck bomb.

– Many eyewitnesses reported that bomb squads in full Hazmat gear were seen around the building immediately before the blast. Police officer Terence Yeakey, who helped save dozens of victims, was one such witness. Yeakey compiled extensive files on his observations but was later found with his throat and wrists slashed having also been shot in the head after he told friends he was being followed by the authorities.

– Several individuals received prior warning that the bombing was about to take place. Bruce Shaw, who rushed to the Murrah building to find his wife who was employed there with the Federal Credit Union, testified that an ATF agent told him that ATF staff had been warned on their pagers not to come to work that day.

– The aftermath of the bombing led to the passage of the Omnibus Crime Bill and the demonization of the ‘Patriot Movement’, which was spreading like wildfire as opposition to federal government abuse grew following the events at Ruby Ridge and Waco. The consequences of the Oklahoma City Bombing effectively dismantled the Patriot Movement before the turn of the century.

Stock up with Fresh Food that lasts with eFoodsDirect (Ad)

Political operatives have repeatedly stated that the only thing that will rescue Barack Obama’s tenure in the White House is another OKC-style bombing that Obama can blame on his political enemies.