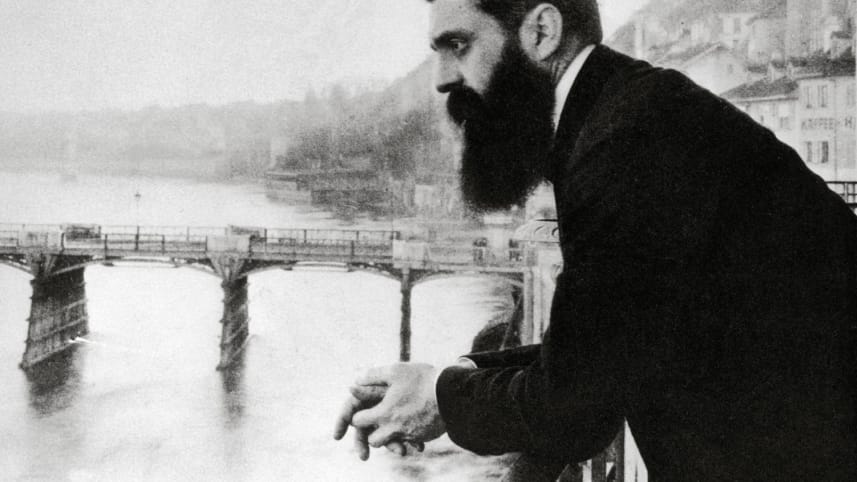 This Day in Jewish History 1897: The First Zionist Council Convenes

‘At Basel, I founded the Jewish state,’ Herzl wrote – after all else failed.

On August 29, 1897, the First Zionist Congress opened in Basel, Switzerland, a three-day conclave at which the movement that led to the establishment of a Jewish state in Palestine a mere half-century later took its first organizational steps. Under the leadership of its visionary — or in the estimation of some, delusional — founder, Theodor Herzl, the movement was from the beginning a democratic one, and within a year, at the Second Zionist Congress, all the delegates in attendance had been elected by their respective communities.

Herzl’s original idea, however, was not a popular movement. As Shlomo Avineri points out in his recent political biography, “Herzl: Theodor Herzl and the Founding of the Jewish State,” as a journalist and playwright, Herzl (1860-1904) first thought he could convince his people of the need for a national home by way of writing a novel about it. He did eventually write such a novel, “Altneuland,” but that was published only in 1902.

Next, he hoped that by enlisting the political and financial backing of a few wealthy, philanthropic and influential Jews — in particular Baron Maurice de Hirsch — and the French branch of the Rothschild family, it would be possible to jump-start the project.

The idea was a nave one, as bankers and industrialists probably had the most to lose by publicly identifying with a disruptive scheme such as this. But Herzl was learning on the job, and if he had understood from the start just how unrealistic his dream was, he might never have started out on the path.

Finally, Herzl decided he would sell his idea to the relevant world leaders, such as the German Kaiser and the Ottoman sultan, whom he thought could be convinced that it would be in their interest to assist the Jews in moving back to their ancestral home. That was another non-starter.

Thus, he turned to the creation of a popular movement, one that by virtue of its sheer numbers and the desperation of its members, would take matters into their own hands. Already a decade before Herzl began his work, members of the Hovevei Zion movement had begun settling in Palestine and working the land, though they were not seeking to create a political entity there. Even if this approach was far from Herzl’s first choice, it was the one that gave the movement its legitimacy, which came from below, from among the very people it presumed to represent.

Shortly after the closing of the First Zionist Congress, Herzl famously wrote in his diary that, “At Basel, I founded the Jewish state.” But even Basel was a second choice: Herzl had originally planned to “found” his state in Munich, a larger and more significant city than the quiet Swiss town that ended up serving as the venue for seven of the 11 Zionist Congresses that took place between 1897 and the start of World War I. It was the Jews of Munich — particularly the Orthodox and Reform leadership and those who were prominent in the city’s economic life — who were concerned that hosting the meeting would stir up trouble for them.

The Basel congress opened on a Sunday; the day before, Herzl attended synagogue, a rarity for him, and was even called to say the blessings over the Torah. He rented the city’s municipal casino for the congress, and instructed the 197 delegates who attended to attire themselves in formal dress.

There were women present, but it was not until the Second Congress that they were given voting privileges, an achievement considering that women still lacked the vote in Europe and the United States.

During its three days, the Congress established the Zionist Organization, with Theodor Herzl to be its president, and created the various internal bodies it needed to function. It also adopted the “Basel Program,” which in its first sentence stated explicitly that, “Zionism aims at establishing for the Jewish people a publicly and legally assured home in Palestine.” “Hatikvah,” which already served as the anthem of the Hovevei Zion movement, was chosen to perform the same function for the Zionist Organization.

Nearly 120 years later, the whole idea sounds no less audacious than it had to have been at the time.