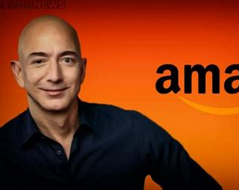 One IPO and 3 splits later, his parents’ stake could be worth almost $30 billion today. That would make them wealthier than Microsoft Corp. co-founder Paul Allen

I am NOT saying Bezos committed insider trading

But I AM saying that grandfather LP Gise was a director at the AEC (Atomic Energy Commission) and key person to approve and fund ARPA , from which ARPAnet evolved , and now Amazon is the largest cloud provider on Earth.

Don’t believe me? Search this for “Gise” (or LP Gise).
apps.dtic.mil/dtic/tr/fullte… Yea, Bezos’ grandfather was a real “nobody”. Just an everyday manager at the AEC.

“James L. McCraw, ALO deputy mgr, is acting manager of Albuquerque Operations until arrival of Lt. Gen. Harold C. Dormelly, USAF, about Aug. 1. Now director of the Defense Atomic Support Agency, Washington, D.C., General Donnelly is retiring from military service after 35yrs.” “Mr. Gise joined Dept of Agriculture in Washington as a messenger in Aug 1935. He left that agency as chief, Administrative Service Division, Bureau of Chemistry and Engineering in 1942 to transfer to the Public Building Administration.” “That same year (1942) , [ Gise ] entered the U. S. Navy and served as an officer for four year.” “Following his military service, [ Gise ] served briefly with the Veterans Administration in Dallas and later with the Navy Department in Washington.” “Gise joined the AEC’s Division of Finance in 1949, transferring the following year to the Division of Military Application. He became assistant director of the division in 1955.” “In 1958, Gise transferred to the Advanced Research Projects Agency of the Department of Defense where he served progressively as director, Program Control and Administration; assistant director for administration, and deputy director.” “Mr. Gise was president of the Albuquerque-Santa Fe Federal Executives Association, an officer and director of the United Community Fund, and a member of the Albuquerque Armed Forces Advisory Committee.” Sandia Lab News, VOL. 20, NO. 4, FEBRUARY 23, 1968

“Two members of the Atomic Energy Commission and key members of the AEC Headquarters and Albuquerque Operations staff visited the Laboratory last week for technical briefings on Sandia weapon systems and other programs.”

Sandia Lab News Vol. 18, No. 24, Dec 2, 1966
“VISITING SANDIA [] was US Rep John F. Rhodes from Arizona (center). A member of the House Appropriations Committee, Rhodes met with LP Gise (left), manager of AEC/ALO, and CW Campbell, VP 4000, before visiting some of the installs.”

Nothing to see here folks. Move along.

“He was a Lt. Commander in the Navy from 1942 to 1946, served briefly with the Veterans Administration, then returned to the Navy Department as Deputy Chief of the Estimates and Analysis Division, Budget Office.” [23] “In 1958, he went to the Advanced Research Projects Agency of the Department of Defense, where he served until 1961, progressively in the position of Director of Program Control and Administration, Assistant Director and then Deputy Director.” Sandia Corporation Lab News – JUNE 7, 1963

In a 1975 conversation , LP Gise mentioned that he believes Lt. Col. George Brown, USAF, a military assistant in, Holaday’s office, actually came up with the name “ARPA”.

In January 1958 , LP Gise was offered the top job at ARPA (according to this 1975 document on DARPA)

Ultimately through, LP Gise was recruited in 1958 “from the AEC to handle the Agency’s [ARPA’s] financial management activity”

1958 – “An office of Program Control + Administration (led by Gise) consisting of 7 civilian professionals, was set up to handle budgetary control and, assignment of funds to Service agents for contracting (through what became formalized as the “ARPA Order” system), ….”

The IDA (Institute of Defense Analysis) was the first to help plan the first group of ARPA projects. Upon creating a TOD (Techncial Operations Division), Gise was elevated to the position of Assistant Director for Administration.

LP Gise was incredibly influential in the procurement model of early ARPA .

“The Saturn IB (pronounced “one B”, also known as the up-rated Saturn I) was an American launch vehicle commissioned by the National Aeronautics and Space Administration (NASA) for the Apollo program. “

Who could have guessed that LP Gise was there for the Saturn IB budget meetings in the fall of 1958 for ARPA … I have a lot to read on the subject, mostly grabbing highlights now.

What? The grandfather of Jeff Bezos was director at DARPA and Sandia, and was thanked by the US Navy for nuclear warhead SSBM (surface to surface ballistic missiles) tech for US submarines?

I thought Amazon only got big because Bezos is “son of an immigrant”! Was LP Gise (grandfather of Jeff Bezos ) the man at the Atomic Energy Commission ( AEC ) that signed over control of the Rocky Flats Plant in the 1960s to DOW Chemical ????

How deep does the rabbit hole go on this path? You know, Rocky Flats Plant ? en.wikipedia.org/wiki/Rocky_Fla…

LP Gise – DOW Chemical – Jeff Bezos – I’m sure the Huffington Post would be all over this today if it connected to President Trump.

Rocky Flats Made Nukes. Then It Made A Mess. Now It’s About To Become A Public Park.

How clean is “clean enough” when your park is an old radioactive Superfund site?https://www.huffingtonpost.com/entry/rocky-flats-colorado_us_591c81c5e4b034684b08bc13 Crazy – Found the copies of the Rocky Flats / Gise papers on a CDC government site – Download them for yourself – cdc.gov/niosh/ocas/pdf… This looks like a fun read you can get on Google books – “
Elements of Controversy: The Atomic Energy Commission and Radiation Safety”

And there that pesky ol’ LP Gise is again, discussing nuclear weapons testing in 1956, as a regional manger at the Atomic Energy Commission. Just a great big nobody – Just a footnote in the “How Amazon was created” book.

Now, Guess who had a dad who was a lifetime exec at DuPont? Of course ….. Robert Mueller ‘s own father, Robert Swan Mueller Jr. So LP Gise was a US Navy officer (admiral actually), as was Robert Swan Mueller Jr., Born one year apart. Hmmm… Robert “Highly Enriched Uranium” Mueller’s dad is widely rumored to be a Nazi Paperclip (Heinrich Muller). Now the wheels are turning.