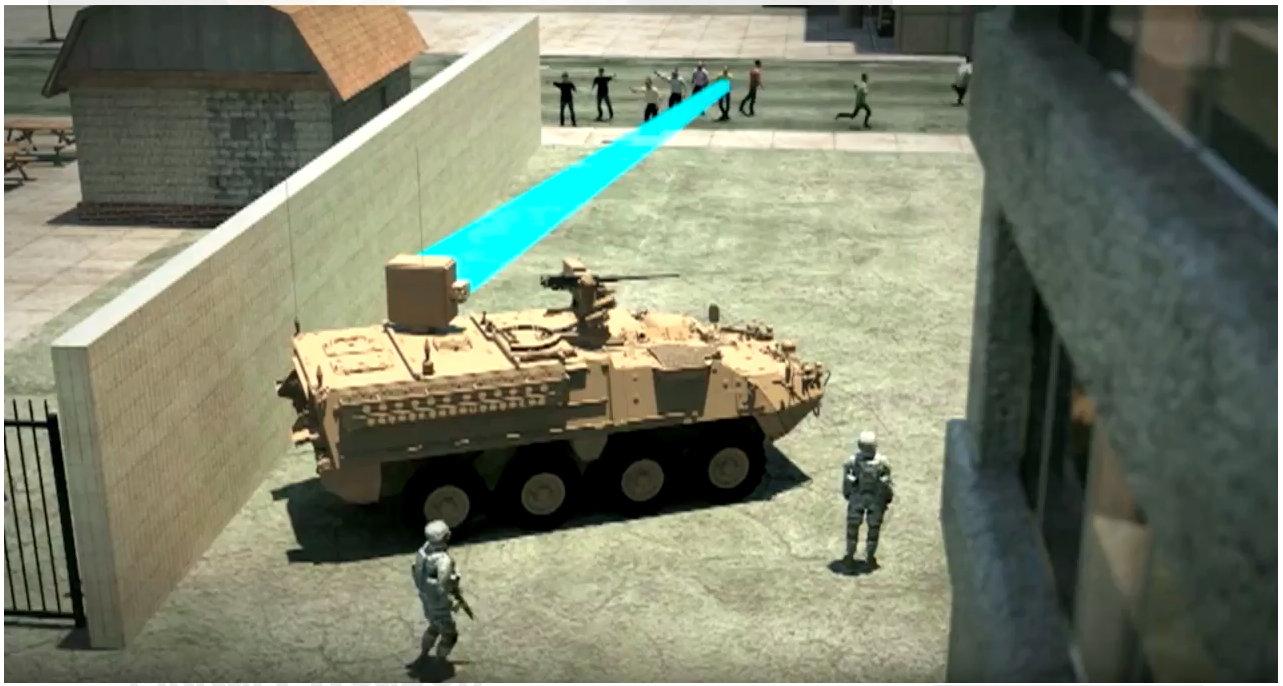 What does the 5G network and a non-lethal weapon developed by the military have in common? The Department of Defense has developed a non-lethal crowd control device called the Active Denial System (ADS). The ADS works by firing a high-powered beam of 95 GHz waves at a target—that is, millimeter wavelengths.  Anyone caught in the beam will feel like their skin is burning. The burning sensation stops once the target leaves the beam. This weapon operates on 95GHz waves and 5G will operate on the same frequencies.

Today’s cellular and Wi-Fi networks rely on microwaves – a type of electromagnetic radiation utilizing frequencies up to 6 gigahertz (GHz) in order to wirelessly transmit voice or data. However, 5G applications will require unlocking of new spectrum bands in higher frequency ranges above 6 GHz to 100 GHz and beyond, utilizing sub-millimeter and millimeter waves – to allow ultra-high rates of data to be transmitted in the same amount of time as compared with previous deployments of microwave radiation.

Now a US weapons that relies on the capability of this electromagnetic technology to induce unpleasant burning sensations on the skin as a form of crowd control is being rolled out.

Millimeter waves are utilized by the U.S. Army in crowd dispersal guns called Active Denial Systems. Dr. Paul Ben-Ishai pointed to research that was commissioned by the U.S. Army to find out why people ran away when the beam touched them. “If you are unlucky enough to be standing there when it hits you, you will feel like your body is on fire.” The U.S. Department of Defense explains how: “The sensation dissipates when the target moves out of the beam. The sensation is intense enough to cause a nearly instantaneous reflex action of the target to flee the beam.”

See the video below for the 5G frequency weapon in action: So, what we’re talking about with 5G technology is being exposed to the same kind of waves day in and day out, only at a lower power than the ADS. Have safety studies confirmed that such exposure is safe? No.

There’s more! Research from a team of Israeli physicists has found that there are new problems to consider with exposure to millimeter waves. When the wavelength of the energy approaches the dimensions of our biological structures, i.e. our skin and sweat ducts, previous assumptions about the safety of energy radiation are no longer valid. The research shows that, with millimeter waves, our sweat ducts actually act like little antennas, which means we would absorb more of this energy into our bodies. Other researchhas demonstrated that short-term exposure to low-intensity millimeter waves affects human cell membranes and could even result in the proliferation of multi-drug resistant bacteria.

Seeing as there has been virtually no research on long-term exposure to millimeter waves, the large-scale deployment of 5G technology is a massive experiment, and we’re the guinea pigs.

There’s no opting out of 5G—in fact it will become more ubiquitous than wireless technology is right now. As Verizon boasts on its website, the “Internet of Things” will thrive on 5G technology. The Internet of Things refers to the expanding number of devices, appliances, utilities, and other technologies that collect, transmit, and share data through the internet. Essentially, many processes that have not previously relied on the internet will start to once 5G roles out: switching lightbulbs on or off with a smartphone app, driverless cars—even “smart cities” that will use wireless networks to collect and analyze data about the environment, traffic, water, transit, lighting, waste management, security, and parking.

I love my devices as much as anyone else but I don’t want to the health of my grandchildren at risk. I don’t want to put them in harm’s way. We now know that the skin, our largest organ does respond to 5g, and in fact our sweat ducts they can act as antennas that can receive signals. 5G has not been tested for safety. The fact that it can interact with our sweat ducts may have much more profound meaning for our overall health and well-being. The idea that we’re going to saturate this country with a network that has never been tested is appalling. I am joining with many other scientists from around the world now to express concerns. We must evaluate these things before we roll out the technology  no matter how attractive it is for us to have faster downloads of video games, pornography or virtual reality. The question we have to ask ourselves is it worth endangering the health of our children?

Israeli research studies presented at an international conference reveal that the same electromagnetic frequencies used for crowd control weapons form the foundation of the latest network – branded as 5G – that will tie together more than 50 billion devices as part of the Internet of Things. Current investigations of wireless frequencies in the millimeter and submillimeter range confirm that these waves interact directly with human skin, specifically the sweat glands. Dr. Ben-Ishai of the Department of Physics, Hebrew University, Israel recently detailed how human sweat ducts act like an array of helical antennas when exposed to these wavelengths. Scientists cautioned that before rolling out 5G technologies that use these frequencies, research on human health effects needed to be done first to ensure the public and environment are protected.

[Dr. Davis notes] “This work shows that the same parts of the human skin that allow us to sweat also respond to 5G radiation much like an antenna that can receive signals. We need the potential adverse health impacts of 5G to be seriously evaluated before we blanket our children, ourselves and the environment with this radiation.”

Research studies from the Dielectric Spectroscopy Laboratory of the Department of Applied Physics, Hebrew University of Jerusalem, headed by Dr. Yuri Feldman, indicate that millimeter and sub-millimeter waves may lead to preferential layer absorption. The number of sweat ducts within human skin varies from two million to four million. The researchers pointed to replicated peer research of these biological effects in laboratory research conducted in other countries and considered this mechanism of action well-proven.

There are now many thousands of peer-reviewed medical and epidemiological studies that show, illustrate or correlate, adverse biological effects with use of mobile phone technology or WIFI. Using frequencies even higher than 5 GHz (and up to 100 GHz) will compress the timeframe in which cancers and other biological effects show themselves within society. It is anyone’s guess on what might happen in terms of biological safety yet it is clear to see that the pulsed nature of these high frequency, high signal intensity signals do not harbor good news for humanity, particularly in relation to the functioning of our DNA.

Millimeter-wave-emitting devices will saturate our environment, and the fact that we’re plunging head-first into deploying this technology without knowing the health consequences is shocking.