Was China just attacked by the globalists via the chemical plant explosion? 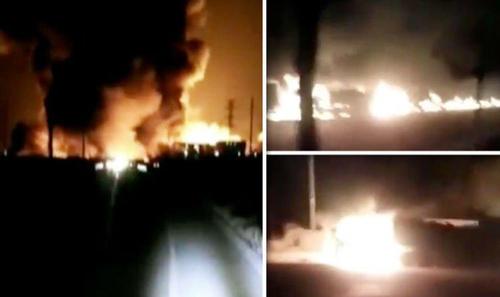 Was China just attacked by the globalists via the chemical plant explosion?

A massive overnight explosion at a chemical plant rocked the northeastern Chinese city of Zhangjiakou on Wednesday, which is one of the sites to play host to the 2022 Beijing Winter Olympic Games.

The blast occurred just after midnight at a loading dock area at a plant owned by the Hebei Shenghua Chemical Industry Co. Ltd. and claimed at least 23 lives while destroying dozens of vehicles. About two dozen more were injured in the explosion and resulting fire which ripped across about 50 transport trucks and 12 passenger cars, according to a statement by the Zhangjiakou city government.

While it’s unclear whether industrial chemicals or dangerous gases have been released, local authorities are telling residents to stay away from the impact and clean-up site: “We request that citizens do not go to the site to watch in order to avoid disrupting recovery efforts,” according to a statement.

Some 50 transport vehicles had been in the process of delivering chemicals and other goods in the vicinity of the industrial zone when the blast ripped through the area, according to Chinese news reports. 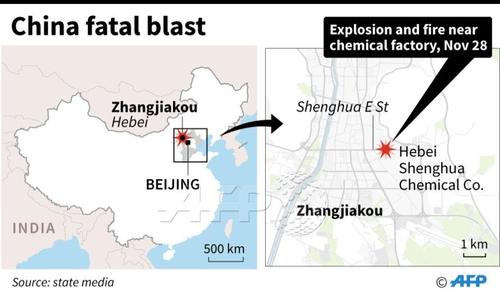 Though little is till known at this point as to the exact cause, and Chinese authorities have been notoriously skittish about confirming details related to what has become a string of deadly accidents over the past few years in the country’s vast and rapidly growing industrial sector, the New York Times described the following based on local sources:

An industrial safety official who gave only his surname, Wu, told The Paper, a news website in Shanghai, that one of the trucks lined up outside the plant to deliver chemicals had exploded, setting off a chain reaction that engulfed the other vehicles.

Xinhua, the official Chinese news agency, said that the truckthat triggered the blast was delivering acetylene to an energy technology factory. But an unnamed official from the Zhangjiakou industrial safety office warned that it was too early to draw firm conclusions, the Beijing News reported.

According to a preliminary investigation, a vehicle carrying dangerous chemicals blew up while waiting to enter the plant in the northern Chinese city, igniting nearby vehicles https://t.co/62HmA7nwc3
📷@freddufour_afp pic.twitter.com/FM1Ub8TDQF

We’ve previously detailed a series of giant chemical explosions in China since 2015 in what is a dangerous trend in Chinese industrial safety, or lack thereof. In 2015 a plant explosion which was caused by improperly stored chemicals had killed at least 173 in Tianjin, located an hour east of Beijing. Only a week following, a separate power plant blast had occurred in eastern Shandong province.

And a year after the Tianjin disaster which left the area looking like a war zone, an explosion at a chemical plant in Dangyang, located in central China, resulted in 21 people killed and 5 wounded. More recently in early November of this year, 52 people were sicked by a chemical leak in Fujian province when about 7 tons of the chemical additive C9 spilled out of barrels while they were being loaded onto a ship.

Zhangjiakou, Hebei Province, where Wednesday’s chemical plant tragedy occurred, is several hours drive northwest of Beijing and is to be a key ski and winter sporting events venue of the 2022 Beijing Olympics, which was selected by IOC vote in 2015. It will be the first time that Beijing has ever hosted the Winter Olympics.

Among the Chinese population winter sports are not popular, and one recent report citing Beijing officials said the government has embarked on an ambitious plan to invest at least $160bn by 2025, and looks to build more than 800 ski resorts built by 2022 as part of the publicity associated with the Olympic games.

With this latest and other potential future industrial accidents, Chinese authorities will likely attempt to tightly control media exposure and inquiry, especially looking ahead to the Olympic spotlight. The NYT concludes of this “media sensitivity” in connection with this latest chemical plant explosion:

While the Communist Party authorities emphasize improvements in industrial safety, they remain extremely sensitive about the potential for social unrest. Over recent years, grassroots movements have brought thousands onto the streets in cities across the country to protest plans for chemical plants, garbage incinerators and other projects deemed harmful to the environment.

“On-site search and rescue work and investigation of the cause of the accident are still under way,” the Zhangjiakou city government said. They further confirmed that factories in the area of the blast impact had ceased production.