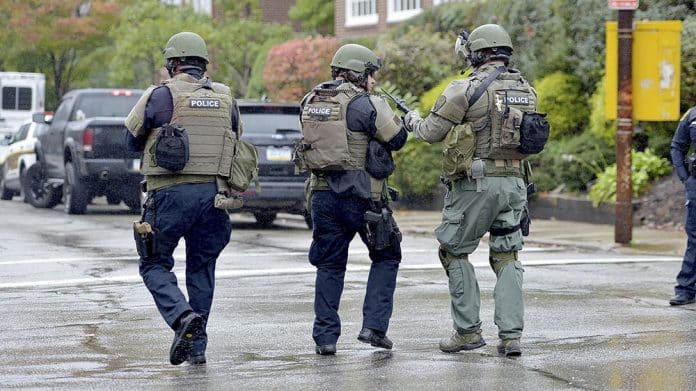 Police respond to an active shooter situation at the Tree of Life synagogue on Wildins Avenue in the Squirrel Hill neighborhood of Pittsburgh, Pa., on Saturday, October 27, 2018. (Pam Panchak/Pittsburgh Post-Gazette via AP)

Following my article on the Pittsburgh Synagogue shooting and how there was a drill held in the same area 9 months earlier, I received some very important evidence from a reader. This evidence is in the form of a recording of the police radio traffic in the area during the alleged shooting. It makes intriguing listening as it contains anomalies that are perhaps best explained in the context of this having been a fake false flag event. Thank you to our vigilant reader and to anyone else who spots something noteworthy about this event, send it to us at VT and we will put it to good use.

I read your article in VT regarding the synagogue shooting. Earlier today I found a full 1+ hour police audio transcript of the shooting done by Broadcastify (listen here:  http://www.youtube.com/watch?v=XHUihwuq4LY) What we couldn’t figure out is WHY in the audio the police kept referring to the shooter or suspect as ‘actor’ and the crime scene as ‘stage’ throughout the audio. Now I know why.

We need to make copies and get all this out before they take down everything. Government’s already trying to push through Draconian laws that were written months ago.