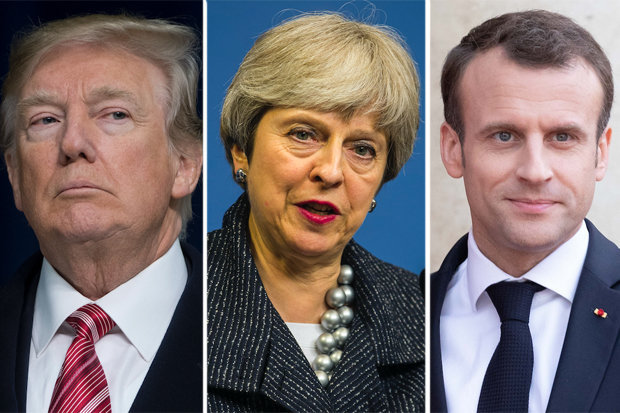 US, France, and UK In Direct Talks Over Possible Syria Strikes

“That has to be, in the history of propaganda in the 20th and 21st centuries, one of the most outrageous claims that I can think of,” John Bolton stated in response to Moscow’s charge that anti-Assad insurgents in Idlib are preparing a chemical false flag in order to hasten a US attack on Damascus, according to a new Wall Street Journal report.

“Along with the United States and France, we have been clear that we will respond swiftly and appropriately if the Assad regime repeats its appalling use of chemical weapons,” he vowed, echoing statements the national security advisor began making weeks ago during a trip to Jerusalem.

The WSJ has revealed the White House is now in direct talks with the U.K. and France over plans for a possible third round of coordinated strikes on Syria should the Syrian Army use chemical weapons during its Idlib assault.

After a speech in Washington on Monday, Bolton told reporters, “We’ve been in consultation with the British and the French, who joined us in the second strike, and they also agree that another use of chemical weapons will result in a much stronger response.”

The news comes a day after Bolton indicated during a speech that the US and its allies Syria would respond with much “stronger” and harsher action against Damascus.

Also, early this week there were reports that Germany is mulling over whether to agree to a request by the United States that it join any potential strikes on Syria, though such a move is expected to be too politically divisive for Germany to agree.

Thus far a Russian air attack on Idlib is underway, with international reports saying about 70 strikes have occurred on Idlib in the past days. Syria pro-government forces have amassed around Idlib Province and are said to number as many as 100,000. If true this would be the largest mustering of Syrian forces for any single battle throughout the seven year long conflict.

Meanwhile the United Nations has warned of an impending humanitarian disaster, and a UN Security Council meeting chaired by the US is set to be held on Tuesday morning, according to the WSJ.

On Monday the WSJ reported that unnamed US officials now claim to be in possession of intelligence which they say shows Assad has already given the order to conduct a chlorine gas attack in an absolutely unprecedented level of “pre-crime” telegraphing of events on the battlefield.

The anonymous officials told the WSJ of “new U.S. intelligence” in what appears an eerily familiar repeat of precisely how the 2003 invasion of Iraq was sold to the American public (namely, “anonymous officials” and vague assurances of unseen intelligence) — albeit posturing over Idlib is now unfolding at an intensely more rapid pace:

Fears of a massacre have been fueled by new U.S. intelligence indicating Mr. Assad has cleared the way for the military to use chlorine gas in any offensive, U.S. officials said. It wasn’t clear from the latest intelligence if Mr. Assad also had given the military permission to use sarin gas, the deadly nerve agent used several times in previous regime attacks on rebel-held areas. It is banned under international law.

It appears Washington is now saying an American attack on Syrian government forces and locations is all but inevitable.

However, this time the stakes are much higher as Russia has built up an unprecedented number of warships in the Mediterranean Sea along the Syrian coast in response to prior reports that the U.S., France, and Great Britain could be preparing an attack.

Meanwhile, does anyone remember this fake news from 15 years ago?…