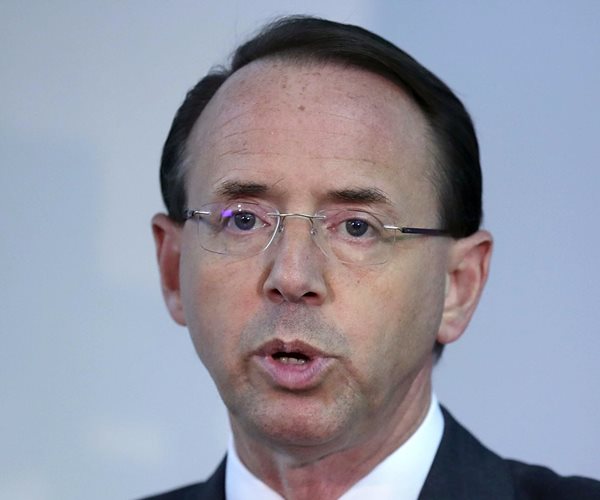 Roughly nine months after Deputy AG Rod Rosenstein testified before the House Judiciary Committee that he would not fire Special Counsel Robert Mueller without “good reason”, House Republicans are again moving to haul him in for questioning following a steady drumbeat of pressure that has intensified over the past week. This comes after they said they would subpoena the memos themselves late Thursday.

According to the Washington Post, Rosenstein will be called back to Capitol Hill to testify, and if he refuses, the House will subpoena him, said Rep. Mark Meadows, who tweeted Friday that GOP leadership had agreed on a plan.

Leadership has agreed to call Rod Rosenstein before Congress, for a closed door hearing with our panel investigating, so he can explain his alleged comments on "wiring" POTUS–as well as other inconsistent statements.

If Mr. Rosenstein fails to show up, we will subpoena him.

The calls for Rosenstein’s testimony have intensified since the New York Times published a bombshell story last Friday alleging that Rosenstein tried to organize an attempt to oust President Trump via the 25th amendment, and that he had suggested surreptitiously recording the president. However, the story, which was drawn from memos allegedly taken by former FBI Deputy Director Andrew McCabe, has been disputed by some people who attended a meeting with McCabe and Rosie the day before Mueller’s appointment was announced. Since then, reports about Rosenstein’s imminent firing/resignation have proven false, as Trump has said he wants to hear Rosenstein’s side of the story. The two, who met briefly Thursday, will meet again next week.

As WaPo points out, House Republicans attempted to curry the votes to impeach Rosenstein, claiming that his Rosenstein’s DOJ wasn’t complying with an investigation into the genesis of the Mueller probe. But in recent weeks House leaders had changed their tune, saying that Rosie had become cooperative. Trump has also considered firing him at least twice.

An agreement from GOP leaders to call Rosenstein to testify puts to rest any lingering speculation that the House would schedule a vote to impeach Rosenstein during the last few days that lawmakers are in town, before departing Washington for an extended pre-midterm campaign period. Meadows’s tweet did not say exactly when he expected Rosenstein to appear on Capitol Hill, but it will surely be after most lawmakers are scheduled to be away from Washington.

Earlier this week, Meadows said that he wanted Rosenstein to testify next week. On Thursday, Rep. Jim Jordan (R-Ohio) said he thought Republicans were “moving in a good direction as far as getting Mr. Rosenstein to come before Congress,” and that he expected Rosenstein would meet with lawmakers “soon”.

Jordan also added the joint committee plans next week to meet with former FBI general counsel James Baker. Lawmakers also are expected to meet during the third week of October with Nellie Ohr, a former contractor for Fusion GPS, the firm behind a dossier detailing Trump’s alleged personal and business ties to Russia, according to two members. Ohr is married to Bruce Ohr, a Justice Department official who met on several occasions with former British intelligence officer Christopher Steele, who compiled the information in the dossier.

While it’s unclear exactly when Rosenstein will testify, his testimony will come as Republicans interview several other witnesses in their investigation, including Nellie Ohr, wife of former deputy attorney general Bruce Ohr, who had ties to Fusion GPS, the opposition research firm that hired an ex-British spy to compile the Trump dossier, that were not properly disclosed.

Then again, it’s still certainly possible that Trump could change his mind and fire Rosenstein before he has an opportunity to testify.