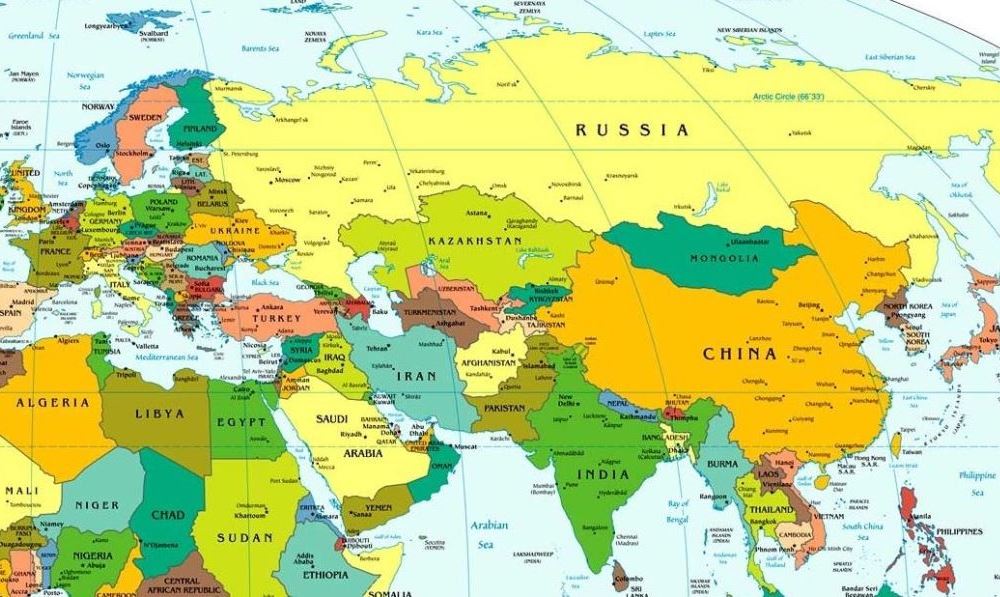 Back in the (Great) Game: The Revenge of Eurasian Land Powers

What is left roaming our wilderness of mirrors depends on the mood swings of the Goddess of the Market. No wonder an effect of Eurasia integration will be a death blow to Bretton Woods and “democratic” neoliberalism, says Pepe Escobar.

Get ready for a major geopolitical chessboard rumble: from now on, every butterfly fluttering its wings and setting off a tornado directly connects to the battle between Eurasia integration and Western sanctions as foreign policy.

It is the paradigm shift of China’s New Silk Roads versus America’s Our Way or the Highway. We used to be under the illusion that history had ended. How did it come to this?

Hop in for some essential time travel. For centuries the Ancient Silk Road, run by mobile nomads, established the competitiveness standard for land-based trade connectivity; a web of trade routes linking Eurasia to the – dominant – Chinese market.

In the early 15th century, based on the tributary system, China had already established a Maritime Silk Road along the Indian Ocean all the way to the east coast of Africa, led by the legendary Admiral Zheng He. Yet it didn’t take much for imperial Beijing to conclude that China was self-sufficient enough – and that emphasis should be placed on land-based operations.

Deprived of a trade connection via a land corridor between Europe and China, Europeans went all-out for their own maritime silk roads. We are all familiar with the spectacular result: half a millennium of Western dominance.

Until quite recently the latest chapters of this Brave New World were conceptualized by the Mahan, Mackinder and Spykman trio.

The Heartland of the World Halford Mackinder’s 1904 Heartland Theory – a product of the imperial Russia-Britain New Great Game – codified the supreme Anglo, and then Anglo-American, fear of a new emerging land power able to reconnect Eurasia to the detriment of maritime powers.

Nicholas Spykman’s 1942 Rimland Theory advocated that mobile maritime powers, such as the UK and the U.S., should aim for strategic offshore balancing. The key was to control the maritime edges of Eurasia—that is, Western Europe, the Middle East and East Asia—against any possible Eurasia unifier. When you don’t need to maintain a large Eurasia land-based army, you exercise control by dominating trade routes along the Eurasian periphery.

Even before Mackinder and Spykman, U.S. Navy Admiral Alfred Thayer Mahan had come up in the 1890s with his Influence of Sea Power Upon History – whereby the “island” U.S. should establish itself as a seaworthy giant, modeled on the British empire, to maintain a balance of power in Europe and Asia.

It was all about containing the maritime edges of Eurasia.

In fact, we lived in a mix of Heartland and Rimland. In 1952, then Secretary of State John Foster Dulles adopted the concept of an “island chain” (then expanded to three chains) alongside Japan, Australia and the Philippines to encircle and contain both China and the USSR in the Pacific. (Note the Trump administration’s attempt at revival via the Quad–U.S., Japan, Australia and India).

George Kennan, the architect of containing the USSR, was drunk on Spykman, while, in a parallel track, as late as 1988, President Ronald Reagan’s speechwriters were still drunk on Mackinder. Referring to U.S. competitors as having a shot at dominating the Eurasian landmass, Reagan gave away the plot: “We fought two world wars to prevent this from occurring,” he said.

Eurasia integration and connectivity is taking on many forms. The China-driven New Silk Roads, also known as Belt and Road Initiative (BRI); the Russia-driven Eurasia Economic Union (EAEU); the Asia Infrastructure Investment Bank (AIIB); the International North-South Transportation Corridor (INSTC), and myriad other mechanisms, are now leading us to a whole new game.

How delightful that the very concept of Eurasian “connectivity” actually comes from a 2007 World Bank report about competitiveness in global supply chains.

Also delightful is how the late Zbigniew “Grand Chessboard” Brzezinski was “inspired” by Mackinder after the fall of the USSR – advocating the partition of a then weak Russia into three separate regions; European, Siberian and Far Eastern. At the height of the unipolar moment, history did seem to have “ended.” Both the western and eastern peripheries of Eurasia were under tight Western control – in Germany and Japan, the two critical nodes in Europe and East Asia. There was also that extra node in the southern periphery of Eurasia, namely the energy-wealthy Middle East.

Washington had encouraged the development of a multilateral European Union that might eventually rival the U.S. in some tech domains, but most of all would enable the U.S. to contain Russia by proxy.

China was only a delocalized, low-cost manufacture base for the expansion of Western capitalism. Japan was not only for all practical purposes still occupied, but also instrumentalized via the Asian Development Bank (ADB), whose message was: We fund your projects only if you are politically correct.

The primary aim, once again, was to prevent any possible convergence of European and East Asian powers as rivals to the US.

The confluence between communism and the Cold War had been essential to prevent Eurasia integration. Washington configured a sort of benign tributary system – borrowing from imperial China – designed to ensure perpetual unipolarity. It was duly maintained by a formidable military, diplomatic, economic, and covert apparatus, with a star role for theChalmers Johnson-defined Empire of Bases encircling, containing and dominating Eurasia.

Compare this recent idyllic past with Brzezinski’s – and Henry Kissinger’s – worst nightmare: what could be defined today as the “revenge of history”.

That features the Russia-China strategic partnership, from energy to trade:  interpolating Russia-China geo-economics; the concerted drive to bypass the U.S. dollar; the AIIB and the BRICS’s New Development Bank involved in infrastructure financing; the tech upgrade inbuilt in Made in China 2025; the push towards an alternative banking clearance mechanism (a new SWIFT); massive stockpiling of gold reserves; and the expanded politico-economic role of the Shanghai Cooperation Organization (SCO).

As Glenn Diesen formulates in his brilliant book, Russia’s Geo-economic Strategy for a Greater Eurasia, “the foundations of an Eurasian core can create a gravitational pull to draw the rimland towards the centre.”

If the complex, long-term, multi-vector process of Eurasia integration could be resumed by just one formula, it would be something like this: the heartland progressively integrating; the rimlands mired in myriad battlefields and the power of the hegemon irretrievably dissolving. Mahan, Mackinder and Spykman to the rescue? It’s not enough. The same applies for the preeminent post-mod Delphic Oracle, also known as Henry Kissinger, simultaneously adorned by hagiography gold and despised as a war criminal.

Before the Trump inauguration, there was much debate in Washington about how Kissinger might engineer – for Trump – a “pivot to Russia” that he had envisioned 45 years ago. This is how I framed the shadow playat the time.

In the end, it’s always about variations of Divide and Rule – as in splitting Russia from China and vice-versa. In theory, Kissinger advised Trump to “rebalance” towards Russia to oppose the irresistible Chinese ascension. It won’t happen, not only because of the strength of the Russia-China strategic partnership, but because across the Beltway, neocons and humanitarian imperialists ganged up to veto it.

Brzezinski’s perpetual Cold War mindset still lords over a fuzzy mix of the Wolfowitz Doctrine and the Clash of Civilizations. The Russophobic Wolfowitz Doctrine – still fully classified – is code for Russia as the perennial top existential threat to the U.S. The Clash, for its part, codifies another variant of Cold War 2.0: East (as in China) vs. West.

Kissinger is trying some rebalancing/hedging himself, noting that the mistake the West (and NATO) is making “is to think that there is a sort of historic evolution that will march across Eurasia – and not to understand that somewhere on that march it will encounter something very different to a Westphalian entity.”

Both Eurasianist Russia and civilization-state China are already on post-Westphalian mode. The redesign goes deep. It includes a key treaty signed in 2001, only a few weeks before 9/11, stressing that both nations renounce any territorial designs on one another’s territory. This happens to concern, crucially, the Primorsky Territory in the Russian Far East along the Amur River, which was ruled by the Ming and Qing empires.

Moreover, Russia and China commit never to do deals with any third party, or allow a third country to use its territory to harm the other’s sovereignty, security and territorial integrity.

So much for turning Russia against China. Instead, what will develop 24/7 are variations of U.S. military and economic containment against Russia, China and Iran – the key nodes of Eurasia integration – in a geo-strategic spectrum. It will include intersections of heartland and rimland across Syria, Ukraine, Afghanistan and the South China Sea. That will proceed in parallel to the Fed weaponizing the U.S. dollar at will. Alastair Crooke took a great shot at deconstructing why Western global elites are terrified of the Russian conceptualization of Eurasia. It’s because “they ‘scent’…a stealth reversion to the old, pre-Socratic values: for the Ancients … the very notion of ‘man’, in that way, did not exist. There were only men: Greeks, Romans, barbarians, Syrians, and so on. This stands in obvious opposition to universal, cosmopolitan ‘man’.”

So it’s Heraclitus versus Voltaire – even as “humanism” as we inherited it from the Enlightenment, is de facto over. Whatever is left roaming our wilderness of mirrors depends on the irascible mood swings of the Goddess of the Market. No wonder one of the side effects of progressive Eurasia integration will be not only a death blow to Bretton Woods but also to “democratic” neoliberalism.

What we have now is also a remastered version of sea power versus land powers. Relentless Russophobia is paired with supreme fear of a Russia-Germany rapprochement – as Bismarck wanted, and as Putin and Merkel recently hinted at. The supreme nightmare for the U.S. is in fact a truly Eurasian Beijing-Berlin-Moscow partnership.

The Belt and Road Initiative (BRI) has not even begun; according to the official Beijing timetable, we’re still in the planning phase. Implementation starts next year. The horizon is 2039. This is China playing a long-distance game of go on steroids, incrementally making the best strategic decisions (allowing for margins of error, of course) to render the opponent powerless as he does not even realize he is under attack.

The New Silk Roads were launched by Xi Jinping five years ago, in Astana (the Silk Road Economic Belt) and Jakarta (the Maritime Silk Road). It took Washington almost half a decade to come up with a response. And that amounts to an avalanche of sanctions and tariffs. Not good enough.

Russia for its part was forced to publicly announce a show of mesmerizing weaponry to dissuade the proverbial War Party adventurers probably for good – while heralding Moscow’s role as co-driver of a brand new game.

On sprawling, superimposed levels, the Russia-China partnership is on a roll; recent examples include summits in Singapore, Astana and St. Petersburg; the SCO summit in Qingdao; and the BRICS Plus summit.

Were the European peninsula of Asia to fully integrate before mid-century – via high-speed rail, fiber optics, pipelines – into the heart of massive, sprawling Eurasia, it’s game over. No wonder Exceptionalistan elites are starting to get the feeling of a silk rope drawn ever so softly, squeezing their gentle throats.