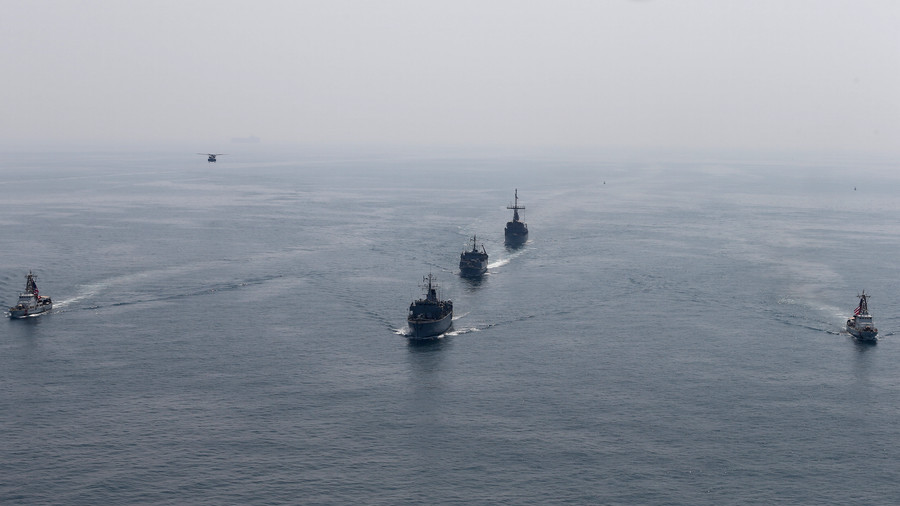 Washington can “if necessary” resort to its Navy to prevent Russian energy hitting the markets in the Middle East, US Internal Secretary Ryan Zinke has revealed, as cited by Washington Examiner.

Zinke alleged that Russia’s engagement in Syria – notably, where it is operating at the invitation of the legitimate government – is a pretext to explore new energy markets.

“I believe the reason they are in the Middle East is they want to broker energy just like they do in eastern Europe, the southern belly of Europe,” he has reportedly said.

And, according to to the official, there are ways and means to tackle it.

“The United States has that ability, with our Navy, to make sure the sea lanes are open, and, if necessary, to blockade … to make sure that their energy does not go to market,” he said.

Zinke was addressing the attendees of the event hosted by the Consumer Energy Alliance, a non-profit group which styles itself as the “voice of the energy consumer” in the US. He went to compare Washington’s approaches to dealing with Russia and Iran, noting that they are effectively the same.

“The economic option on Iran and Russia is, more or less, leveraging and replacing fuels,” he said, while referring to Russia as a “one trick pony” with an economy dependent on fossil fuels.

Zinke’s statements provoked an angry response from Moscow, which equated a potential maritime blockade to an “act of war,” while calling the internal secretary’s assumptions “nonsense.”

The whole idea is “absolute nonsense,” Russian Senator Aleksey Pushkov said, commenting on Zinke’s words. He added that “a US blockade of Russia would be equal to a declaration of war under international law.”

The statements come as Trump administration has been on a mission to boost the export of its liquefied natural gas to Europe, replacing Russia, the far cheaper option for European consumers. For that effect, the Trump administration officials, including US President Donald Trump himself, try to persuade Germany to pull out of the “inappropriate” Nord Stream 2 pipeline project, which according to Trump, made Berlin Moscow’s “captive.”

Moscow has repeatedly stressed that the $11 billion Nord Stream 2 pipeline, which is set to double the existing pipeline capacity to 110 billion cubic meters, is a purely economic project. The Kremlin argues that Washington’s fervent opposition to the project is simply driven by economic reasons and is an example of unfair competition.

“I believe we share the view that energy cannot be a tool to exercise pressure and that consumers should be able to choose the suppliers,” Russian Energy Minister Aleksandr Novak said following a meeting with US Energy Secretary Rick Perry in Moscow in September.

The US stance has drawn backlash from Germany, which has reaffirmed its commitment to the project.

Germany’s leading organization for industry, the Federation of German Industries (BDI), has called on the US to stay away from the EU energy policy and the bilateral agreements between Berlin and Moscow.

“I have a big problem when a third state interferes in our energy supply,” Dieter Kempf, head of the Federation of German Industries (BDI) said following a recent meeting between German Chancellor Angela Merkel and Russian President Vladimir Putin.