AND THE WAR CAME 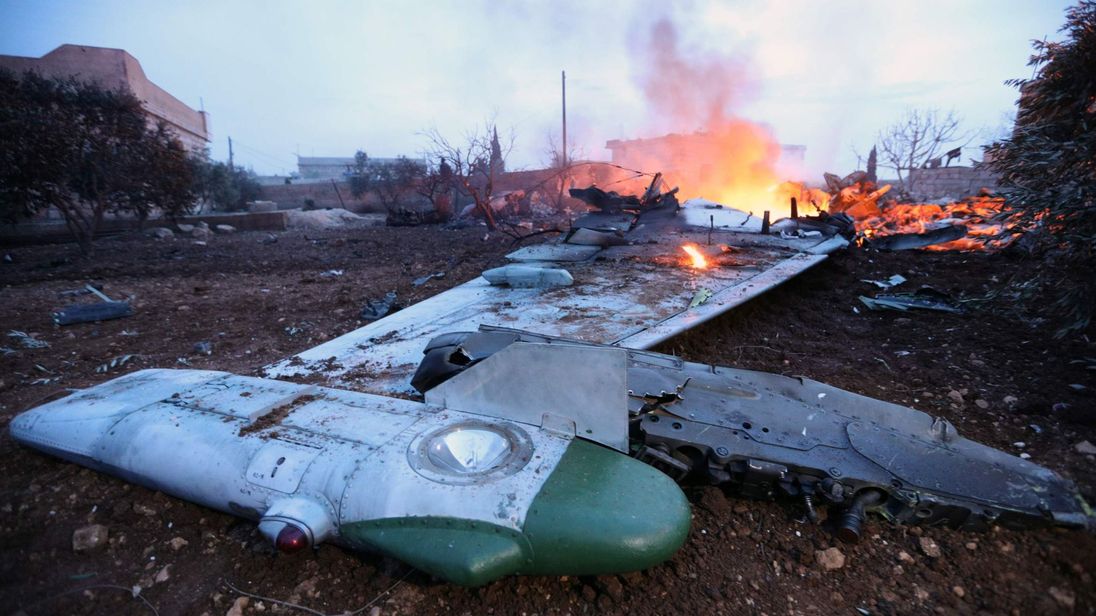 Russian plane shot down by rebels in Syria – The plane was shot down in a rebel-held area near Idlib, northern Syria

AND THE WAR  CAME

In the wake of last week’s downing of a Russian Il-20 surveillance plane in Syria, much speculation has ensued over the retaliatory weapon systems Russia plans to deploy: S-300s vs S-200s, Krasukha-4 mobile electronic warfare systems, etc; these are tactical determinants to be sure. But not sea-level game-changers in and of themselves.

By now, most people are aware of Russia’s Ministry of Defense (MOD) laying the blame squarely on Israel, when a more diplomatic response might have diluted the culpability to include Syrian incompetence and S-200 operator error. This conclusion is clearly at odds, and not just tonally, with Putin’s rather laconic and diffused assessment: “a chain of tragic, random events”.

Of greater import (than freshly deployed weapon inventories) is the bifurcation evidenced in the Russian response. There’s been a migration from the univocal and measured parsings of Putin, Foreign Minister Lavrov and Press Secretary Peskov to a shared podium populated by a less nuanced, more binary power center consisting of Minister of Defense Shoigu, Deputy Defense Minister Gerasimov, and the so-called Stavka; binary as in, shoot or don’t shoot. How simpler can a march to war get?

John Helmer presents a fascinating perspective on the War Cabinet or Stavka configuration here, offering, into the bargain, a not-so-oblique critique of Putin’s leadership:

“In fact, the Stavka was a 19th century improvisation in Russian command-control methods. It has been the response of the military and security commands, and the intelligence services, when the head of state proves to be too mistaken, vacillating or indecisive to defend against foreign attacks aiming at the decapitation of Russia’s leadership, liquidation of its defences,  and destruction of its economy.”

As Helmer notes, the Stavka dates from the late 19th century Imperial Russian Armed Forces, encapsulating WWI, before being re-established in June 1941. In August 1941, Stalin himself, in his role as Supreme Commander, assumed the leadership of Stavka in its reorganized form, Stavka of the Supreme Main Command.

The May arrival of a Stavka (in Putin’s newly formed government) would be consistent with the observation that the former’s range of motion, his up-until-now broad latitude of response, has been to some degree curtailed. Without needing to pass judgment on the long-term efficacy of his absorb-then-counter-strike approach (or whether Russia has simply moved to a good cop/bad cop contrivance), the military-industrial faction at Putin’s back will insist, going forward, on less chess and more hammer.

The Statesman Approach has ceded turf, willingly or otherwise, to the War Cabinet. Many have noted an emergent war cabinet footing in the Trump Administration as well, particularly with the arrival of National Security Adviser John Bolton in April.

Evidence of a converging lethality?

Just as war is a secular trend’s final ‘economic’ gesture after a series of progressively under-performing business cycles (each successive cycle hobbled by mounting, unassailable debt), the efficacy of statesmanship dissipates in like fashion. Diplomacy becomes an exercise in pushing on rhetorical strings.

Has Putin acceded to a consensual or an imposed power-sharing? We’ll probably never know. Has he been relegated to adjunct status on military affairs? Very doubtful. Let’s be deferential to the Russian President and call it a more collective response to future incitements. Nonetheless there is an unmistakable whiff of failure. Recourse to war is the ultimate failure of statesmanship.

If the reader will permit a brief philosophical interlude, war’s arrival is as supernatural as it is inevitable. Despite our many retrospective dissections, it routinely exceeds our best efforts to understand and thus avert; at best, we succeed only in postponing it.

Lincoln said it best in his 1865 Second Inaugural near the conclusion of the American Civil War:

“On the occasion corresponding to this four years ago all thoughts were anxiously directed to an impending civil war. All dreaded it, all sought to avert it…Both parties deprecated war, but one of them would make war rather than let the nation survive, and the other would accept war rather than let it perish, and the war came.”

Human agency flatters itself as being the Prime Mover of war. Not so. War, of its own cryptic accord, stages its own arrival.

And the war came.

In the Syrian theater today, human co-agency finds itself at an all-too-human impasse. Yesterday, Israel’s Prime Minister Binyamin Netanyahu asserted that the IDF will continue operations to prevent Iran from establishing a Syrian foothold. This was in response to Russian Defense Minister Shoigu’s declaration the day before that the S-300 air defense systems and automated air defense management systems were on their way to Syria. Where is the conceivable walk-back for either side? The fuse is lit at both ends.

We are at an immovable object – irresistible force moment where elaborate pretexts and false flags may no longer be required. How will a sickening slide to war be averted now? One senses, in the impasse, war’s hell-bent determination to arrive.

Speaking of America, let us touch briefly upon the battle ensuing Stateside. For, the American domestic climate has everything to do with what’s transpiring on WW3’s formative fronts.

The Nordstream 2 pipeline project is one leading economic indicator that could forever alter the geopolitics beneath its ‘feet’. And it appears, despite President Trump’s best efforts, to be a go.

The Berlin-to-Moscow pivot, should it proceed from this elemental connectivity, will extend Eurasian consolidation immeasurably. Here’s Ted Luongo recently with what amounts to a Mackinderite/Great Game interpretation:

“U.S. and British foreign policy has been obsessed for more than a hundred years with stopping the natural alliance between Germany’s industrial base and Russia’s vast tracts of natural resources as well as Russia’s own science and engineering prowess.

These two countries cannot, in any version of a unipolar world dominated by The Davos Crowd, be allowed to form an economic no less political alliance because the level of coordination and economic prosperity works directly against their goals of lowering everyone’s expectations for what humans can accomplish.”

George Friedman (formerly of Stratfor, more recently of Geopolitical Futures) has for years offered much the same rationale for the great wars of the modern era, below:

There is a Left Hand and Right Hand at play in the world, each belonging to the same anatomy despite great efforts to obscure their dark connectivity. Opinions vary on the neural center. Suffice to say both hands are, at the moment, enacting their shadow-play with eerie simultaneity –one globally, the other closer to home.

The Trump Russian Collusion narrative is collapsing at calamitous speed, exposed for the whole-cloth fiction it is (I described this in a Saker outing a few months ago).

The fact is the Syrian and NATO war theaters (see here, here and here) are being brought to a boil at precisely the same time the US flank of the Deep State (really the Five Eyes transnational consortium of surveillance agencies that actively operate as One while maintaining the mirage of ‘cooperating’ national entities) is under unprecedented attack and potential exposure.

MI6 and GCHQ are all over the backstage shadow-play. Too many of the Collusion key players possess Five Eyes credentials: Stefan Halper (CIA, MI6), Joe Mifsud (MI6), Christopher Steele (MI6), Alexander Downer (ASIS, MI6), Robert Hannigan (GCHQ). That ‘former’ MI6 spy Chris Steele is consistently portrayed as a rogue retiree with a personal grudge against the President is a telling bit of institutional misdirection.

Herein may lie the rationale behind Trump’s uncharacteristic reversal, specifically his September 21st retraction of a September 17th declassification order demanding vast troves of FBI un-redactions. How so? Because the request drew much bigger fish than the usual and expected slate of domestic adversaries known as the American ‘Deep State’.

Among other things, the redactions almost certainly conceal extensive Five Eyes participation. Trump will seek his pound of flesh wherever the plot-line takes him. And it seems to be leading to the international stage, from the ranks of America’s ‘steadfast allies’ no less. Australia and the UK leaders are likely to have collapsed in a heap at the prospect of the Trump un-redactions. Suddenly Trump has been presented with a transnational cache of fresh leverage. The declassification hook drew a couple of foreign whales. So it’s been retracted pending a more ambitious fishing expedition.

Ponder too (particularly after listening to Napolitano, above) the earth-shaking ramifications of the following headlines:

What are the NATO implications alone?

And what countermeasures will pour forth to avoid/displace such a headline? America’s Dept of Justice/FBI participants in this attempted coup are suddenly reduced to mere parochial players in a burgeoning geopolitical tsunami of unprecedented magnitude. Faced with such abject exposure (not to mention cries of treason) Five Eyes has little choice but to unleash a diversionary countermeasure of similar scale.

That would be WW3.

Conclusion? The Russian ‘shift’ is commensurate with the heightened need in the West for a diversionary conflagration. Born in the aftermath of WW2, Five Eyes requires the ‘rejuvenative effects’ (Gd help us) of WW3. Even if its prolongation should kill us all.