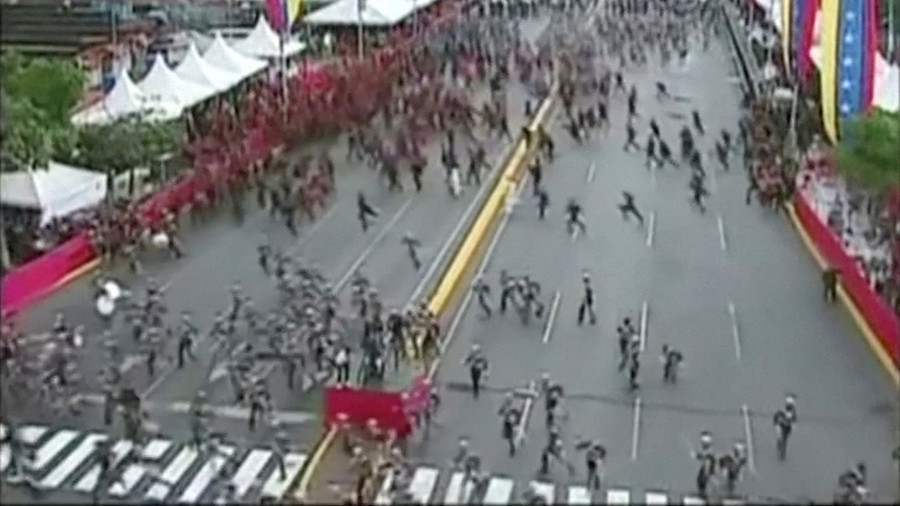 Venezuelan President Nicolas Maduro has been targeted in an attempted attack during a televised public address, officials confirm. Several explosives-laden drones detonated as he was speaking at a military ceremony.

Venezuela’s Information Minister Jorge Rodriguez has confirmed that an attack on Maduro took place at the event. Several drones rigged with explosives went off close to the presidential box during the address.

“All the investigations have indicated that (the explosions) were an attack on President Nicholas Maduro,”Rodriguez told media

Maduro has been moved to safety and is carrying on with his duties, he said. Seven National Guard soldiers have been injured as a result of the failed assassination, according to Rodriguez. The extent of their injuries has not been revealed.

In the video from the scene, Maduro and the officials standing beside him could be seen looking up in the air seconds before the address was cut off. The feed then cuts to a wide shot of the gathered servicemen, who break formation and start scattering.

Providing details of the incident, Rodriguez specified that the explosions struck at 5:41 local time, and several flying devices loaded with explosives were shot down by the presidential guard.

Maduro was speaking at the event marking the 81st anniversary of the Bolivarian National Guard (GNB), a branch of the country’s armed forces, when the incident took place.