AG Sessions is a swamp rat who slyly
presented himself as a patriot and
friend of Trump but is really a
globalist.

Hindsight has shown the nation conclusively that Jeff Sessions was a total setup from the very beginning.

It never really made any sense that the very conservative U.S. Senator from Alabama (i.e. from the real Deep South) would climb on board the Trump train…especially so early in the campaign season.

In point of fact, Sessions early support of Trump was completely at odds with his political persona and mousey approach to life in the Senate.

Clearly, something was amiss in the relationship struck between Candidate Trump and Senator Sessions.  And it’s quite likely that other agents of Deep State were feeding Trump hogwash about Sessions’ loyalty all the while.  Stealthily gaining Trump’s trust in this deceitful way surely compelled the president to appoint Sessions Attorney General—the single biggest mistake of his term. What is now readily apparent is that Sessions was deliberately sent into the Trump campaign as a Trojan horse by the Bush crime syndicate.  Sessions has been a willing lackey for the Bush political dynasty for decades and never missed an opportunity to support their many misguided wars and liberty-destroying legislation.

One HUGE red flag about Senator Sessions is that he never saw a war he didn’t support.  Deep South Senators are almost always beholden to the Military-Industrial Complex and Sessions is no different.  The southern good-ole-boy network is literally knit together with their mutual allegiance to the armaments industries as well as to the many military bases south of the Mason-Dixon line.

Then there is the Big Oil money that has always helped fuel Sessions various campaigns for political office.  This is where the Bush and the Sessions trajectories frequently intersected.  Neither ever saw an oil company they didn’t fully support or campaign donations from the same industry they didn’t accept.

In Deep South politics, oil is even thicker than blood…much thicker!  All of the Gulf Coast states have a strong commitment to the Big Oil agenda and Sessions’ Alabama is no different.  This is what his relationship with President George W. Bush really jelled around: if war is necessary to advance the Big Oil agenda, then why not have another one in the Middle East regardless of ridiculously false justifications.

Not only is Sessions in league with the Bush crime syndicate, he’s also an SES (Senior Executive Service) member since at least 1988.  And here’s the proof: Look who’s on the SES payroll. Mr. SES himself. Even his name gives him away!

Once any government official or political appointee is selected by SES, the pay grade jumps significantly as does the overall benefit package.  Once these golden handcuffs are put on an upwardly mobile politico, there’s virtually no taking them off.  Sessions is a perfect example of how an apparently down-home good-ole-boy is really a Deep State operative by his own choice.  And who ever suspected it before the 2016 election?!

Certainly not Donald Trump.  Candidate Trump was somehow smitten by the ever-disarming and folksy-fake Sessions.  Very few other conservative Republican stalwarts supported Trump at that time, so it was easy for him to be conned by the perfidious Sessions.  This is precisely why Sessions was chosen in the first place by his Deep State masters.  No one ever suspected him to be such a deceptive Trojan horse and shameless betrayer.  As it turns out, this guy is really good…actually better at playing the “Benedict Arnold” than the original.

Not only is the unabashed Sessions comfortable in his role of taking down a sitting POTUS, he seems to be much more cunning and resolute than anyone would have imagined.  Hence, the $64,000 question is: Where is this abiding and incongruent audacity to betray the President really coming from?

There can only be one or two answers to this critical question.  Either Sessions is being bribed or blackmailed or both.  He would have to be compensated handsomely (i.e. bribery) to be willing to be painted as such a vile villain, so it’s unlikely that this alone would compel him.  Therefore, it’s quite likely he is being coerced via blackmail for either a criminal act (or acts) hidden in his personal or professional history.  Or perhaps Sessions is being framed for a Pedogate-type of transgression, or worse.[1]

Nothing else really makes sense as to why Jeff Sessions would willingly incur the wrath of the vast majority of people in the country.  After all, the Left detests him because of his many unpopular initiatives taken as Attorney General; but the Right really hates him with a passion for the profound harm he has inflicted on Trump as well as on the Office of the President.  Truly, Sessions will go down in history as a man so despised by his core constituency that he will have nowhere to live in the USA.  Even Benedict Arnold had to find safe haven in England.

What does Trump do with his traitorous AG?

The U.S. Attorney General is the most powerful position in the federal government.  Not only can the AG take down a president, he can take down any head of state on the planet.  They can issue such scathing indictments that whole nations can be brought to a standstill.  While this only happens very infrequently, it can and does occur, so the mere threat of the AG’s projection of prosecutorial powers is quite scary to VIPs everywhere.

Trump made a HUGE error when he did not fire Sessions upon his first act of flagrant disloyalty and failure to go after the Clinton crime family.  That DOJ endeavor alone would have precluded so much mischief from Mueller’s hit squad.  Trump made the same mistake with allowing James Comey to stay on as FBI Director.  However, in both cases, Trump’s lapse in judgment created extraordinary opportunities for Deep State to expose itself.

It really does appear that The Donald’s trademark Trumpian courage was again rewarded by so many agents of Deep State getting caught with their pants down…and they’re still down for all to see.  While the list of globalist coup plotters, intel insurrectionists and purveyors of treason only gets longer by the week, there is a great risk with Trump’s current strategy.  The closer we get to midterms, the more his tactics for disposing of the seditious Sessions will come under more scrutiny.

At the end of the day, maybe even today, Trump needs to ignominiously fire Sessions to set an example for all to see.  This defining act of his presidency ought to be taken before the election, not after.  Because if things go wrong for the Republicans on Election Day, the Left will be demanding Trump’s impeachment.  The extreme left-wingers and ultra liberals will be calling for his head and no less, just as we have since Trump was elected! See: SOS: Midterm Election Crisis Point

That’s how serious this situation is, and yet very few are talking about it.  And this ever-worsening state of affairs will only evolve in a manner that will leave Trump with less and less wiggle room.

There are also the many other plots and schemes being hatched against the POTUS every day between now and November 6th.  Any one of these could throw him a curveball that clocks him in just the wrong way.  After all, George Soros himself put up $18 billion of his own money to finish off Trump once and for all. 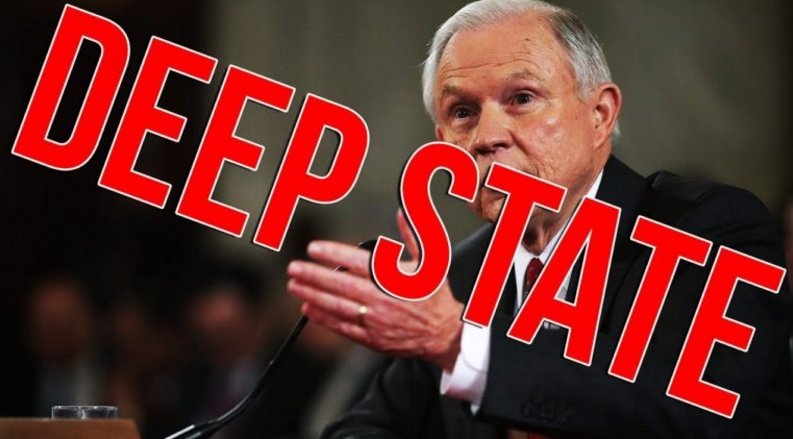 There’s no question that Trump’s survival instincts have served him extremely well up until now.  However, with a full-scale war being waged by the DOJ, FBI and CIA with the blessing of his own AG, things are about to get very dicey indeed.  If the subversive Jeff Sessions will perpetrate what he already has in broad daylight, what is he doing behind the scenes.  Truly, Sessions has proven himself to be the proverbial wolf in sheep’s clothing.  Hence, SESSIONS CANNOT BE FIRED SOON ENOUGH!

Once Sessions is fired, Deputy AG Rod Rosenstein can be terminated from government service as well.  Then Special Counsel Robert Mueller can be expeditiously relieved of his scandalous duties as a prelude to the termination of the Special Counsel investigation of 2017.  The longer any of these corrupt characters are permitted in the building, the greater the constitutional crisis it will be.  And the nation has already reached a breaking point a number of times during Trump’s presidency.

It’s of paramount importance to acknowledge that there are multiple conspiracies unfolding simultaneously throughout the 50 states between now and Election Day.  The CIA’s Mockingbird Media has already warned the American people that violent attacks are expected against the mainstream media.  They have also put out that Trump will be held responsible for any violence against journalists and/or MSM property in view of his unceasing yet entirely true presidential proclamation: THE MAINSTREAM MEDIA IS THE ENEMY OF THE PEOPLE!

Lastly, were the average citizen to understand just how tenuous Trump’s hold on power really is, as well as how much the NWO globalist cabal wants to frogmarch him out of the White House, many would understand that—>

Bottom Line: Swamp rat Jeff Sessions must be replaced post-haste by a no-nonsense prosecutor who will work for the American people.  The Republic is in dire need of an Attorney General who will really “drain the swamp” inside the Beltway.