TERROR IN RUSSIA: Moscow and Sochi car-rammings are GLADIO operations 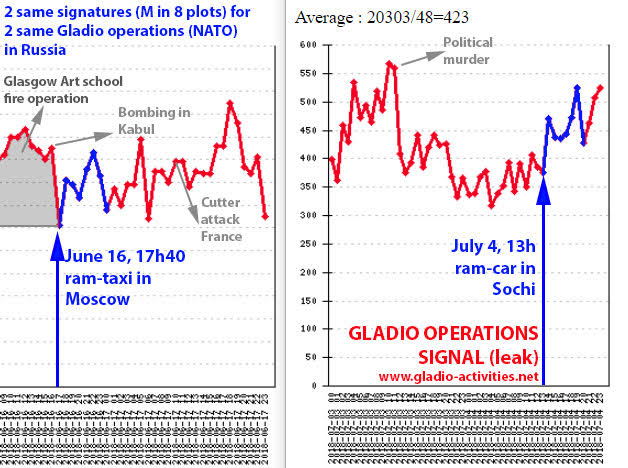 TERROR IN RUSSIA: Moscow And Sochi Car-rammings Are GLADIO Operations

The two car rammings in Moscow and Sochi are GLADIO operations. The first evidence is the graphics on the signal that a leak within Gladio, recorded on my web server in real time and according to the operations of Gladio in the field. On this signal you will see clearly for both operations the same “M” in 8 plots on the Gladio signal. It means that these signatures required 8 hours each to be drawn on the Gladio signal. It means that someone spent 8 hours behind his screen and my screen (hacking) to be sure that I can see the M.

Gladio often uses such graphics and particularly, the M, for some operations. You see on the right part, near political murder (I don’t say where) a bevelled peak. Such a peak is often used for murder or massive shooting, like the last massive shooting in the school in Texas was recorded by Gladio on my server. On the left, you have the end of the Glasgow Art School fire operation. Some operations requires time and so, graphically, they represent like a wave with a peak in the middle to indicate the beginning of the operation, or here, at the beginning of the fire. It is not necessary at the beginning of the operation for Gladio which can include, like here, the installation of the firing system.

The second evidence is the similarities of both events and drivers.

Many of us drive our cars, and we can be sleepy on the wheel, but how many of use will drive on the crowd in a Mundial cities? None, especially the taxi who are professionals.  So, is there a reason to explain these events? Yes, there are.  We will analyse this below, but first, there are some reminders.

The current position of Gladio

Gladio is fundamentally an intelligence-terrorist-false flag organization belonging to NATO, in Belgium. The official part of Gladio doesn’t exist anymore on paper, since the 90’s, but its underground part, linked to terrorism, false flag and so on, is still exists, in Belgium and all NATO’s countries. They are something like the Devil’s hand of NATO. The operations that NATO cannot do officially, Gladio does them.

However, you see in the graph above that Gladio also runs operations against the NATO member nations. It is true. In 2014, the leaders of NATO decided:

Gladio has two types of activity depending on whether or not they receive the authorization or the agreement to operate or not. Usually, they receive this agreement or this order from a government or military authority, even for the terror attacks within the NATO’s countries. Indeed, to spread the terror and to designate the culprits can be very useful to manipulate the opinion and to attack the false culprits. We call that a false flag operation. It is as old as the world.

It is the same when they attack other countries. Of course, if Gladio conducts an attack in Russia or Afghanistan, on request of NATO, they will not claim the attack. This attack will be done on behalf of terrorist groups or will look like an accident, or will not be claimed at all.

It is also typically true for the operations that Gladio runs in the NATO countries, without the agreement of NATO, like the fire at the Glasgow Art School.

Here, in both cases of car-ramming in Russia, we can be sure that Gladio received the order from NATO to carry out these attacks in Russia.  The goal is the destabilization of Russia and the Mundial. Gladio obviously doesn’t run with Russia’s permission since Gladio belongs to NATO.  There’s no reason that Gladio attacks Russia without the NATO agreement.

And since Gladio also plays the game in reverse mode, the NATO’s countries will probably experience ram-car-ramming attacks operated by Gladio and without the approval of NATO. The principle of reciprocity is already running for the multiple fires in the NATO countries for the fire, requested by the UK, in the Winter Cherry Mall in Russia, specifically because of the Skripal case.

Gladio wants to blow up the truth so they decided to record all their operations on my web server through this signal. It is to reveal to the humanity what is their job and for who they did it. However, they don’t wait for this particular signal to blow up in the world press to avenge the countries and populations victims of NATO.

How can Gladio manipulate ordinary people to lead them to terrorist acts?

In the previous weeks, Gladio showed me through a series of operations recorded on the signal, that they have the control on a new kind of weapon. Indeed, we just saw several ordinary mothers and fathers becoming suddenly crazy enough, to attack, and sometimes, to kill their kids with a hammer, ax, gun, poison, and often to attack, with the same violence, the police, when the cops are coming on the scene.

There are other examples. A guy in the Netherlands shouting at the cops from his terrace and killing the police dog when they arrive. We got a cutter attack in a French hypermarket, where the girl said that she heard Allah asking her to do that. The witness who stopped her said that this girl seemed like a puppet without any power after her crazy cutter attack and that her very sweet voice did not match with her acts of violence.

We also had a hostage-taking in Paris where nobody understood what this terrorist did and for what. A Belgian man who is released from the prison for 36 hours and who kills an ex-cellmate with a hammer,  and again, kills two police officers and a teenager. We also have in France a famous guy who hosted the terrorists of Paris and who became suddenly and totally crazy and was then sent by his parent to the psychiatric clinic.

But why did I get all these events, and particularly the last one,  recorded in the Gladio signal. The answer is that Gladio wanted to show me something new.

But it is not really new for them. Indeed, in the past, for the terror attacks, we also have more than often, terrorists who seem to be puppets or crazy. We can note that among these terrorists, there are no brains.

So I did some research and I found only one answer. These are psychotronic weapons.  We are not talking about SciFi.  Recently, even the the MSM news is talking about such weapons. Do you remember the sonic attack on the American embassy in Cuba? Or more recently on the American diplomats in China? These weapons are similar to scalar wave weapons, and they include both sonic and the psychotronic weapons. The weapons used in Cuba and China are like microwaves. They warm the brains and they can provoke irremediable consequences.

The psychotronic weapons also work with waves, but they specifically act on our mind. This technology is not new (1970), but, decade after decade, they became more advanced and portable.  They are used by various Intelligence Services, and they often accompany the monitoring gadgets.  This technology is able today to provoke a violent attitude in any individual.  So, I don’t know how they use such equipment today, but I see in both cases that we are talking about a taxi. It means that someone has planted within the cab this psychotronic technology; something to impact and to control the driver while he is alone in his car.

Gladio doesn’t probably get this result in one day.  They must know the target, follow him and know if he is receptive to this technology or not, and then decide when and how to proceed. And, when the guy is ready, they can choose to use him.

Such weapon could explain why the drivers don’t remember what they did, and why most terrorists seem to be ultra-violent puppets. Some drugs could probably do the same, but the problem with the drugs is that they leave traces, while nobody can check if the terrorist was under the influence of a psychotronic weapon.

Anyway, if you don’t believe such a possibility or that such technology currently exists, you have to explain why two taxi drivers did the exact same things… and with the very same signature on the Gladio signal.

THE FIRES IN NATO’S COUNTRIES

About the other news, I have to be precise that a big part of the blazes in Belgium, France, UK, and the USA, are criminal and organized by Gladio. It is also the case for the series of fires in Liège, yesterday, and for the 4 simultaneous fires in the USA in 4 recycling plants in 4 states and in 4 hours. And during these 4 hours, there were 2 fires in recycling plants in France. Another example is still in the USA, 9 semis are on fire on the first day, and 9 dump trucks are on fire in other places the day after. Such coincidences are not possible.

It looks also that many fires have been triggered by drones (like this http://mediahub.unl.edu/media/3986?format=iframe&autoplay=1), especially for the fires beginning on the roof, the top floor or on a terrace, like the terrace of the Palace of Justice of Paris. Such technology can explain many fires, including also the many wildfires. There is another clue about this; it is the unusual concentration of the fires in the same region.

There is another kind of fire: there are the fires started in wood storage, furniture shops, in the sheds and bins aside houses, in the factory or other buildings. But most of these fires are simultaneous or successive in a same area.

Many fires seem to be recorded on the Gladio signal, including the ones that I presented above. However, there are too many fires and records, and it is not easy to be sure of all of them.

You can find a summary of my story in English here http://docdro.id/ztkAydf, ; a video in English, with my head, here http://vimeo.com/266657401 (including the example of the situation that Gladio copied to orchestrate the attack in Toronto) as well as the website gladio-activities.net where Gladio records and signs itself all his operations since the terror attack in Manchester on May 22, 2017. (about 150 operations and 2000 deaths…).