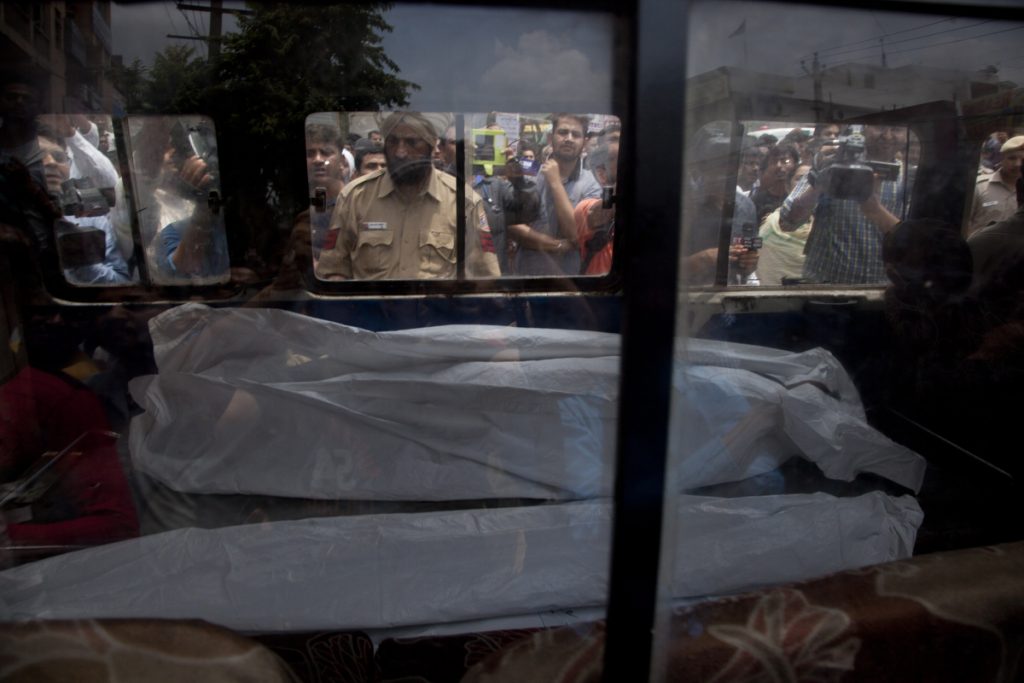 An ambulance carries one of the 11 bodies found in Burari village, New Delhi, India, on Sunday. Ten bodies, blindfolded by cotton and pieces of cloth, were found hanging from an iron grill used as a ventilator in the home’s courtyard. Associated Press/Rishabh R. Jain

Handwritten notes point toward some spiritual or mystical practices by the whole family, police say.

NEW DELHI — Police in India’s capital said they found 11 bodies at a home under mysterious circumstances Sunday, including 10 that were blindfolded and hanging.

The victims were all from the same family and most had lived in the home where they were found in Burari village in the northern part of New Delhi, police officer Vineet Kumar said.

During a search of the house, handwritten notes were found that point “toward observance of some definite spiritual or mystical practices by the whole family,” police said in a statement.

“Coincidentally, these notes have strong similarity with the manner in which the mouths, eyes etc of the deceased were tied and taped,” the statement said. It didn’t elaborate.

Kumar said police began their investigation after they received a call Sunday that some “members of a family have committed suicide.”

But he said that no suicide note was found, and that police were investigating whether the victims – a 77-year-old woman, her two sons and their wives, a daughter and five grandchildren – died by suicide or were killed.

There were no bullet marks on the victims’ bodies and there was no sign of forced entry into the house, Kumar said. “We’re yet to reach any conclusion whatsoever,” he said.

Police said in their statement later Sunday that a murder case had been registered, though a police official said both murder and suicide were being investigated.

The statement said that the house had not been ransacked, and that no valuables were missing.

Ten bodies, blindfolded by cotton and pieces of cloth, were found hanging from an iron grill used as a ventilator in the home’s courtyard, while the body of the 77-year-old woman was lying on the floor of the house, said the police official, who spoke on condition of anonymity because he was not authorized to talk to reporters.

The family had lived in the house for more than two decades, the Hindustan Times newspaper reported. It said the house belongs to a businessman who ran a plywood shop and dairy.

The newspaper said that around 8 a.m. Sunday, a neighbor with whom the businessman used to go for morning walks went to see him and found the door of the house open and the 10 people, including the businessman, hanging.