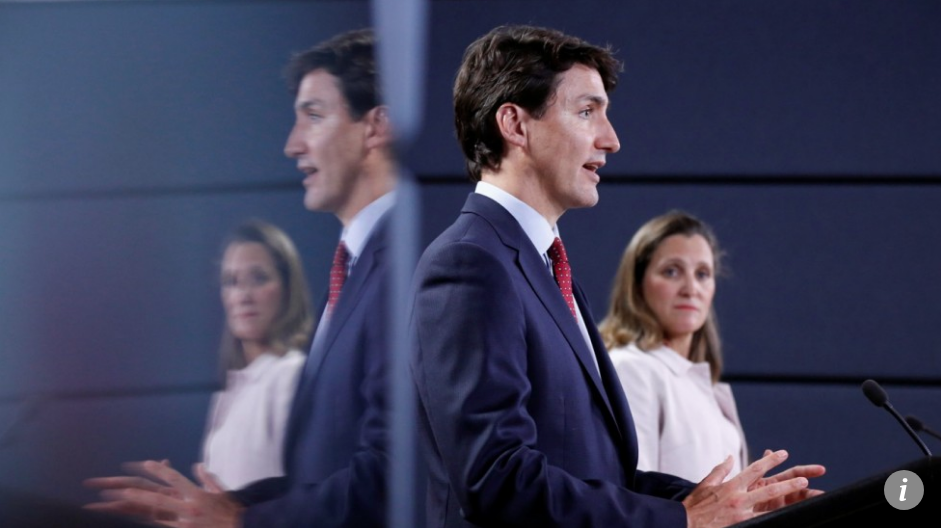 Canada responded to the US tariffs on steel and aluminum by imposing billions worth of countermeasures, while Mexico put duties on food and steel and the EU vowed its own retaliation

US President Donald Trump’s decision Thursday to slap tariffs on steel and aluminum from Canada, Mexico and the European Union sharply escalated global trade tensions and widened a rift with America’s closest allies.

The Trump administration’s announcement that its once-delayed tariffs would take effect starting Friday was met swift condemnation and retaliation as well as a multilateral challenge at the World Trade Organisation.

Canadian leaders reacted particularly angrily to the tariffs, 25 per cent on steel and 10 per cent on aluminum. Trump had justified the import levies on the grounds of national security – a line of reasoning Canadian officials called absurd, illogical and illegal.

Canada, the largest exporter of steel and aluminum to the United States, said it would apply counter-tariffs of 25 per cent and 10 per cent on US$16.6 billion worth of American metals, farm goods and other products, to take effect July 1.

“That Canada could be a national security threat to the US is inconceivable,” said Canadian Prime Minister Justin Trudeau, noting the many Canadians who have died alongside US soldiers in joint military operations over the years. “These tariffs are an affront to the long-standing security partnership between Canada and the United States.”

Mexico responded to the news by announcing immediate retaliatory tariffs on US products including pork bellies, apples, grapes, blueberries and flat steel. EU leaders already had drawn up a list of American imports worth several billions of dollars that would be subject to tariffs, including jeans, Kentucky bourbon and Harley-Davidson motorcycles – goods aimed at applying maximum political pressure as they are produced in home states of top lawmakers.

French President Emmanuel Macron said in a speech that the US tariffs would mean “war”.

“This decision is not only unlawful but it is a mistake in many respects,” Macron said in a speech after the US announcement. “Economic nationalism leads to war.”

International Monetary Fund chief Christine Lagarde meanwhile warned the G7 officials of an erosion of trust amid the trade frictions, saying that the action will “distort and damage and disrupt supply chains which have been established now for decades”.

“This is protectionism, pure and simple,” said Jean-Claude Juncker, president of the EU Commission, which represents the 28-member states in the union. He said the US “now leaves us with no choice” but to impose duties on American imports, although he did not specify the exact amount or timing of the retaliation.

European officials on Thursday met US Commerce Secretary Wilbur Ross in Paris in a last-ditch effort to dissuade the US from going through with the tariffs, arguing among other things that the administration was directing its aim at the wrong target. They said the source of the problem of excess global steel production is China, not Europe. Trump first announced plans to tax imported steel and aluminum from all countries in March, but delayed applying the tariffs on the EU, Canada, Mexico and a handful of other countries as the administration sought voluntary quotas or other trade concessions from them. Ross indicated that negotiations could continue even after the tariffs are imposed, but EU officials insisted that the threat of metal tariffs be removed before broader trade discussions could take place.

The EU as a bloc is the United States’ largest trading partner, with exchange of goods and services exceeding US$1 trillion. Steel and aluminum make up a tiny fraction of the overall trade: US steel imports from all countries totaled about US$29 billion in 2016 – a fifth of that from the EU.

As such, if the US and its trading partners confine the tariffs and counter-tariffs to steel and aluminum, trade experts say, the threat of the global trade war expanding could pass, even as transatlantic relations have been strained by Trump’s pull-out of the Paris climate accord and nuclear deal with Iran.

But what worries analysts now is how Trump might react to the trade retaliation. In a separate trade battle with China, Trump initially threatened tariffs on US$50 billion of Chinese goods for intellectual property theft, but after Beijing vowed it would match the tariffs, the president proposed tripling the duties on US$150 billion of Chinese imports.

“If the US ups the ante and this doesn’t remain just a steel issue, particularly with Canada, Mexico and the EU, then that would be a signal to me that we are spinning out of control,” said Douglas Irwin, an economics professor and trade historian at Dartmouth College. He added: “I can understand, in some sense, the administration starting a trade war with China, but it is enormously damaging and counterproductive to start a trade war with Canada, the EU and Mexico.”

That sentiment was shared by US lawmakers from both parties, many businesses and to some degree even by the United Steelworkers union. Congressional Republicans blasted Trump’s move to levy steel and aluminum imports, predicting it would hurt domestic companies and lead to higher prices for American consumers. “This is dumb,” said Nebraska Senator Ben Sasse, adding that similar protectionist measures contributed to the Great Depression in 1929.

House Speaker Paul Ryan said flatly that he disagreed with the decision. “Instead of addressing the real problems in the international trade of these products, today’s action targets America’s allies when we should be working with them,” he said.

But the steel and aluminum tariffs are likely to complicate, if not hamper, ongoing negotiations with Canada and Mexico to revamp the North American Free Trade Agreement, a major economic goal for the administration. Trump has made it no secret that the threat of steel and aluminum tariffs was intended as a lever to win concessions from Canada and Mexico.

“The most likely impact is the stalling of the negotiations,” said Christopher Wilson, deputy director of the Mexico Institute at the Wilson Centre in Washington.

The new tariffs come one month before Mexico’s July 1 presidential elections, and on Thursday, the country’s presidential candidates bristled at the news. “Don’t play with Mexico,” tweeted Jose Antonio Meade, of the ruling Institutional Revolutionary Party. “We will defend our jobs, our markets and our workers.” Front-runner Andres Manuel Lopez Obrador, of the National Regeneration Movement, warned the Mexican government not to “fall into the trap of a trade war” because Mexico’s economy “is very weak. … Therefore we have to act firmly, but at the same time maintain trade relations with the United States, and so dialogue is very important.”

Trudeau said he had spoken with Trump last Friday about meeting with the president to finalize a deal on a revised Nafta, as the parties appeared to have the makings of an agreement. But Trudeau said that vice-president Mike Pence contacted him Tuesday and said that Canada would have to accept a five-year sunset clause as a precondition to a Nafta deal. A sunset provision would automatically dissolve Nafta after five years unless the partners all agreed to extend it. Trudeau said that was unacceptable to Canada.

Last week Ross said his agency would consider whether imported cars and car parts are harming US national security and as such should be subject to new tariffs. The department initiated the investigation by tapping the same rarely invoked provision of US trade law, called Section 232, that was the basis for levying taxes on imported steel and aluminum.

In the metals case, the administration concluded that the rise of foreign steel and aluminum over the years had hurt domestic producers and presented an economic and national security risk to the country because it had resulted in fewer American sources for military armor and infrastructure, such as the electric power grid.

Bad news that @POTUS has decided to impose taxes on American consumers buying steel and aluminum from our closest allies–Canada, the EU, and Mexico (with whom we run a trade surplus on steel). In addition to higher prices, these tariffs invite retaliation.

That announcement threatened to scuttle continuing talks with China, but Ross said Thursday that he planned to go to Beijing this weekend, as scheduled, for another round of negotiations.

Earlier South Korea won a permanent tariff exemption on steel after it agreed to a quota, and similar deals have been cut with Brazil, Australia and Argentina. Japan, another major steel supplier to the US, earlier was slapped with steel duties as it has steadfastly declined the Trump administration’s overtures to sit down and negotiate a trade deal.