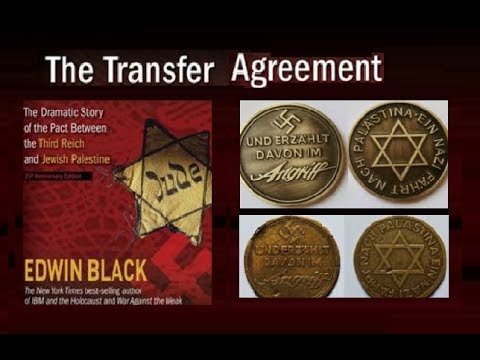 From Wikipedia, the free encyclopedia

The Haavara Agreement (Hebrew: הסכם העברה Translit.: heskem haavara Translated: “transfer agreement”) was an agreement between Nazi Germany and Zionist German Jews signed on 25 August 1933.
The agreement was finalized after three months of talks by the Zionist Federation of Germany, the Anglo-Palestine Bank (under the directive of the Jewish Agency) and the economic authorities of Nazi Germany. It was a major factor in making possible the migration of approximately 60,000 German Jews to Palestine in 1933–1939.[1]

The agreement was controversial both within the NSDAP and in the Zionist movement.
As historian Edwin Black put it, “The Transfer Agreement tore the Jewish world apart, turning leader against leader, threatening rebellion and even assassination.”[23] Opposition came in particular from the mainstream US leadership of the World Zionist Congress, in particular Abba Hillel Silver and American Jewish Congress president Rabbi Stephen Wise.[24]
Wise and other leaders of the Anti-Nazi boycott of 1933 argued against the agreement, narrowly failing to persuade the Nineteenth Zionist Congress in August 1935 to vote against it.[23]

The right-wing Revisionist Zionists and their leader Vladimir Jabotinsky were even more vocal in their opposition.[25]
The Revisionist newspaper in Palestine, Hazit Haam published a sharp denunciation of those involved in the agreement as “betrayers”, and shortly afterwards one of the negotiators, Haim Arlosoroff was assassinated.

Nazi Medallion with a Swastika and a Star of David–” A Nazi Travels to Palestine”, 1934

A medal struck in honor of the series of articles” A Nazi Travels to Palestine” which was published in the Nazi journal “Der Angriff” (The Attack). A memento of the cooperation that took place between the Nazi Party and the German Zionist Federation, in their mutual goal of relocating German Jews to Palestine. Germany, 1934.

The recto of the medallion depicts a Star of David in the center, surrounded by the inscription in German “A Nazi Travels to Palestine” (Ein Nazi fährt nach Palästina). The verso depicts a swastika in the center and the words “And he writes about it in The Attack” (Und erzählt davon in Angriff).

In the beginning of the Nazi rule in Germany, the Zionist Movement was inclined to cooperate with the line that the Nazi government adopted at the time – encouraging immigration of German Jews to Eretz Israel.

In the spring of 1933, the leaders of the German Zionist Association decided to contact elements within the Nazi party who might support the Zionist cause. Kurt Tuchler, a German-Jewish lawyer and judge and member of the managing committee of the German Zionist Federation, contacted Leopold von Mildenstein, a senior Nazi officer who was head of the Jewish department of the SD (the security service of the SS and the Nazi party), and asked him to publish an article in the Nazi press about the Jewish settlements in Eretz Israel. In 1933, the two men traveled to Eretz Israel with their wives and spent a month touring the country, to enable von Mildenstein to get an impression of the booming Jewish industrial, agricultural and settlement efforts in Palestine. Ina report to Yad Vashem years later, Tuchler wrote,

“The purpose of the visit was to create in an important Nazi newspaper an image that would promote the Zionist cause in Eretz Israel.” After their return to Germany, von Mildenstein published a series of 12 illustrated articles in the Nazi newspaper “Der Angriff” (The Attack), which was the mouthpiece of Joseph Goebbels, the Nazi Propaganda Minister. To commemorate the articles, Goebbels struck this medallion.