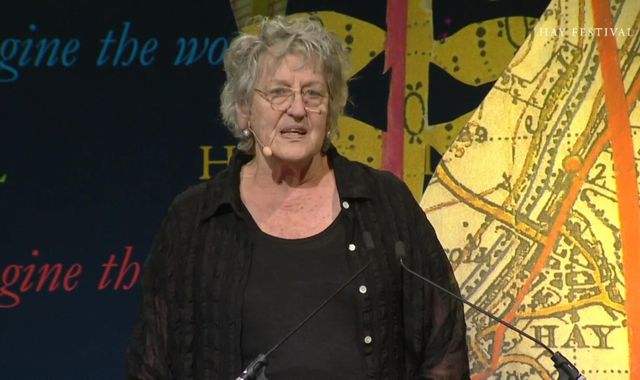 ‘Most rape is just lazy, careless and insensitive’

Feminist author Germaine Greer has called for a rethink on how rape is prosecuted, saying some cases should be thought of as “non-consensual… bad sex” rather than a “violent crime”.

The academic made the controversial remarks at the Hay literary festival, where she was promoting her new book.

She told an audience that some offenders should be given 200 hours community service and have an “R” tattooed on their cheek or hand.

“Most rape is just lazy, just careless, just insensitive. Every time a man rolls over on his exhausted wife and insists on enjoying his conjugal right, he is raping her,” she said.

“Instead of thinking of rape as a spectacularly violent crime – and some rapes are – think about it as non-consensual… that is bad sex. Sex where there is no communication, no tenderness, no mention of love.”

"It’s an awful thing to be raped but to attempt to bring the person who raped you to justice and getting nowhere, getting discredited, getting humiliated, that's a tragedy." – @TheFemaleGreer #HayFestival2018

“We treat women who have been through the ordeal of rape as corpus delicti. If you go to the police, your mobile will be taken off you, you will be cross-examined, you are a piece of evidence. It’s a mess and it’s getting us worse and nowhere,” she said.

The charity Rape Crisis states that only 5.7% of reported rape cases end in a conviction and only 15% of those who experience sexual violence choose to report it to police.

“What the hell are you saying? Something that leaves no sign, no injury, no nothing is more damaging to a woman than seeing your best friend blown up by an IED is to a veteran?”

Greer was raped shortly before her 19th birthday but did not report it to police because she was not “angry enough”.

I remember Germaine Greer boycotting Hay because of their sponsor, Nestlé's policy on selling baby milk to the Third World. I also remember her, in Brisbane, telling the audience how terrible Australian festivals were, compared with Hay. Now she's back in Hay, defending rape.

Her comments were not received well online, with people calling her a “rape apologist” and an “anti-feminist”.

Rape victim Emily Hunt tweeted: “I am happy for #GermaineGreer that she wasn’t one of the vast majority of rape victims who end up with PTSD, but seriously, we’re not all overreacting or hysterical. Rape victims with PTSD: we’re statistically significant. Rape is always violent, whether or not there are bruises.”

Novelist Joanne Harris wrote: “I remember Germaine Greer boycotting Hay because of their sponsor Nestlé’s policy on selling baby milk to the Third World. I also remember her, in Brisbane, telling the audience how terrible Australian festivals were, compared with Hay. Now she’s back in Hay, defending rape.”

Greer also expressed her doubts about the #MeToo movement and Harvey Weinstein court case, saying: “They will break down the witness.”