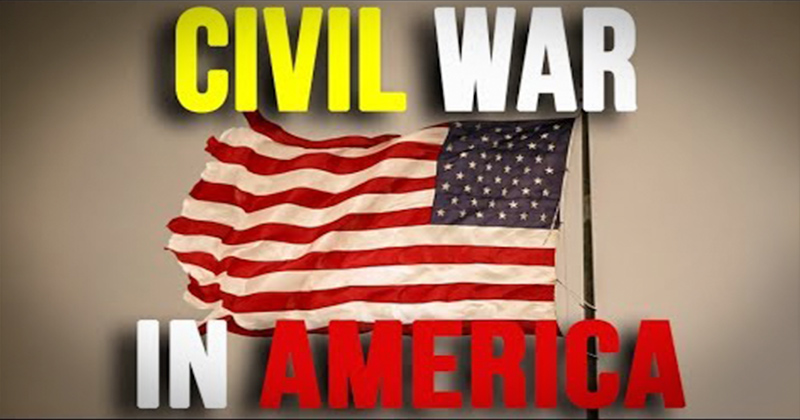 The NWO Globalists are attempting to
destroy
the American Republic
with civil war.

Therefore, patriots everywhere need to be smarter than ever.

The New World Order globalist cabal has given marching orders to the American political class, top corporate officers and leadership throughout civil society to launch the next phase of CIVIL WAR 2.0.

It’s the Rothschild international banking cartel that appears to be instigating this ever-intensifying civil war via foreign agents such as George Soros.  International criminal Soros is the ugly face of what is essentially an unfolding American “Bolshevik Revolution”.

However, the real forces behind this attempt at regime change in Washington, D.C. are far more concealed than these banksters who everyone now knows.  London bankers have always been nothing more than bagmen for the European Black Nobility and their Vatican co-conspirators.  Clearly, Pope Francis has revealed his strong socialist leanings like no pontiff in Roman catholic history.

By putting a transparent traitor like Soros in prison, a HUGE message will be sent to all the other co-conspirators.  Will they continue fomenting their insurrection in the face of incarceration?  These government criminals will do everything possible to stay out of prison once Soros is locked up.

There is already a massive amount of evidence which necessitates the immediate indictment of Barack Obama, Hillary Clinton, Bill Clinton, James Comey, Robert Mueller and other ringleaders of this Purple Revolution.  Hence, every day that passes only further emboldens these Leftist revolutionistas… and gives them more time to launch their brazen attacks on the American Republic.

The ultra-liberal Left knows well how to conduct a communist revolution having had well over a century to perfect their brutal strategies and violent tactics.  The ongoing Purple Revolution, that began with the election of Donald Trump, is only now entering what some are calling a hot phase.  The following article contains links which undeniably document this increasingly tumultuous phase: Is Civil War In The US Imminent?.

KEY POINT: Look at who George Soros has staging the Purple Revolution!

The Obamas, the Clintons, the Bidens, the Podestas and other hardcore Democratic leaders could not overthrow Trump immediately following the 2016 election outcome; the coup would have been too obvious.  Instead, what they have done, is stealthily put into place the invisible machinery of revolution with which to implement their long-planned insurrection.  For those who disbelieve it, these Bolsheviks have been socially engineered to fight for their hard-won “Sodom and Gomorrah”.  So methodically mind-controlled are they, that they will NEVER give up their “Sodom and Gomorrah”—under no circumstances.

Not only is New York City their Sodom and Los Angeles their Gomorrah, every other sanctuary city in between is also one or the other.  For example, Washington, D.C. and San Fransisco, Boston and Seattle, Philadelphia and Denver fall into the same two god-forsaken categories.

It is in these major metro areas that Soros & Company have been working frenetically to prepare the battlefield for CIVIL WAR 2.0.  This is why the loudest voices of the insurgency issue forth from the progressive strongholds of California’s Silicon Valley and Hollyweird, the Northeast intelligentsia domiciled in New York, Connecticut and Massachusetts, as well as the southern liberal bastions like Atlanta, Miami and NOLA.

This slow motion Purple Revolution has many different components to it.  It was engineered as an extremely clandestine coup d’état that had to be executed with extraordinary stealth and guile.  Because of the Internet, the American patriot movement is far too aware of the seditious game plan.  In years past, they could get away with such mass manipulations of the body politic like they did with the American Civil War of the 1860s. There is no better way to destroy a nation than to plunge it into a surreptitiously staged and violent civil war.

And, yes, even Mexico.

Each of these conflicts was quite purposefully manufactured in the banking capitals of London, New York City, Frankfort, Paris and Rome.  The Rothschild international banking cartel (aka the banksters) never saw a war they didn’t like.  These banksters are now going after the big prize—the United States of America.

In reality they have no choice but to execute a controlled demolition of the biggest Pyramid-Ponzi scheme of all time.  From the nexus of the City of London’s Financial District and Manhattan’s Wall Street emerged the largest global gambling casino in world history.  However, the house is now broke and everyone knows it.  The banksters have created money out of thin air for way too long and they know the end is near.

Only with this understanding can the self-destructive plots and ploys of international war profiteer George Soros be correctly comprehended.  His ill-gotten gains over many decades were literally given to him by the Rothschilds via various insider trading schemes and other financial criminal activity.  Then he was told when and where and how to use these funds by his masters for the explicit purpose of warmongering and inciting social chaos. See: GEORGE SOROS: The Back Story No One Talks About

This is why Russia wants him prosecuted and imprisoned—post-haste.  Soros has proven himself to be an enemy of the American people and an unrivaled menace to society everywhere. Billionaire George Soros is a wanted man in Russia

Because of his assigned investment strategy of war profiteering, George Soros had traded to take advantage of every armed conflict listed above.  Soros, and his many hidden co-conspirators within the Rothschild banking cartel, live to exploit conflicts the world over.  They financially support every piece of the war-making process and profit handsomely from beginning to end.  Just who do you think is waiting in the wings to rebuild devastated Syria?  And Iraq? And Libya, etc.?  It was these same banksters who conceived of disaster capitalism where they incessantly create catastrophes of every ilk and kind, particularly regional and civil wars.

Bottom Line: There is no more profitable a disaster than civil war.  Not only does it destroy the nation physically, it irreparably tears the social fabric.  Then the warmongers can impose a new order in the wake of the ensuing chaos via Ordo ab Chao.  Puppet regimes are then routinely installed in countries across the planet to administer the draconian dictates of the new rulers (really just the old rulers with new faces).

The Democratic Party, and especially the extreme left wing of progressive politics, have been socially engineered over decades for this critical moment.  The liberal Left is now held completely captive by the Soros funding machine.  Whoever pays the bills always calls the shots—with no questions asked.  This is why paymaster and political pimp George Soros MUST be removed from the streets.  He is dangerous to the extreme and will do anything before he dies to manifest his utterly perverted vision around the globe.

Likewise, the Rothschild banking cartel must be prosecuted to the fullest extent of the law.  The dystopian New World Order, which they have systematically fabricated since the 1700s, is in its final phase of completion.  The USA and its many armed citizens now stand as the last bulwark against what will essentially be a global totalitarian superstate administered by a tyrannical One World Government established in Israel.

In light of this rapidly evolving scenario, We the People, on both sides of the political spectrum, must do everything in our power to short-circuit this civil war scheme.  Truly, every American patriot is highly encouraged and compelled to stop—>