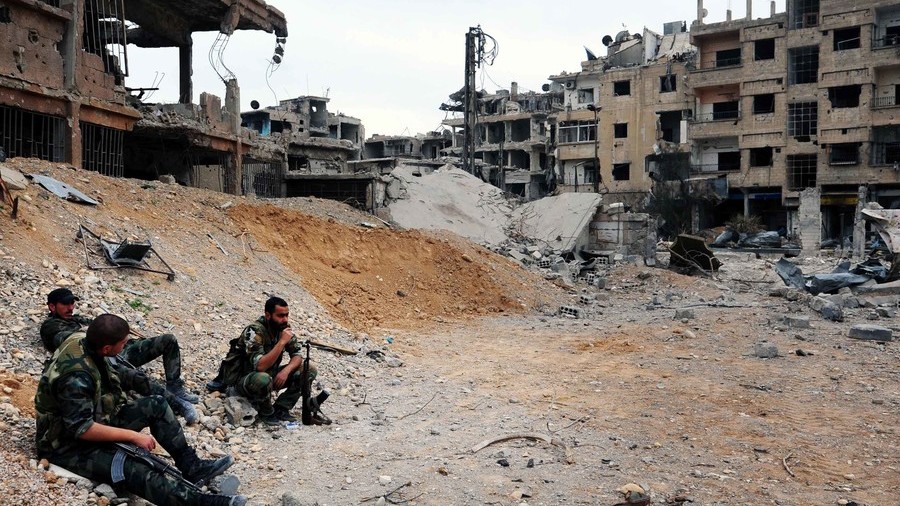 Reports of an alleged gas attack in the Syrian town of Douma are ‘fake news’ aimed at justifying potential strikes against Syria, Moscow said. It warned of “dire consequences” in the event of any military interference.

The Russian Foreign Ministry denounced the latest reports about a chemical attack that allegedly affected dozens of civilians in the militant-controlled town of Douma. It said the reports were another example of a “continuous series of fake news about the use of chlorine and other chemical agents by the government forces.”

The ministry pointed out that the source of the reports was the notorious “civil defense” group, the White Helmets, which has been repeatedly accused of having ties to terrorists, as well as other groups based in the US and UK.

Russia has warned about a false-flag chemical attack being prepared in the recent months, the ministry said. Those who are not interested in a genuine political settlement of the Syrian crisis are seeking to complicate the situation on the ground, it added.

“The goal of this… baseless speculation is to shield the terrorists and… the radical opposition that refuse to engage in a political settlement [process], as well as to justify potential military strikes from the outside,” the statement said. It then warned that any military interference in Syria conducted under “far-fetched or fabricated pretexts” would be “absolutely unacceptable” and could lead to “dire consequences.”

Meanwhile, the reports by various rebel-linked activists about the alleged chemical incident in Douma seem to have provoked yet another wave of hysteria in the West. US President Donald Trump rushed to denounce the unconfirmed attack as a “mindless” atrocity and a “humanitarian disaster for no reason whatsoever.” He also warned that those behind the alleged attack ‘will pay a big price.’

Many dead, including women and children, in mindless CHEMICAL attack in Syria. Area of atrocity is in lockdown and encircled by Syrian Army, making it completely inaccessible to outside world. President Putin, Russia and Iran are responsible for backing Animal Assad. Big price…

….to pay. Open area immediately for medical help and verification. Another humanitarian disaster for no reason whatsoever. SICK!

Accusations against the Syrian government and Russia soon followed. In his Twitter posts, Trump declared “President [Vladimir] Putin, Russia and Iran… responsible” for the attack because of their backing for Syrian President Bashar Assad. Earlier, the US State Department also said that “Russia ultimately bears responsibility for the brutal targeting of countless Syrians with chemical weapons.”

However, US officials admitted that they were unable to independently verify any information about the alleged incident and had to rely solely on “reports” made by rebel-linked sources.

The EU claimed on Sunday that there is “evidence” pointing to “another chemical attack” conducted by Damascus. It provided no specific details to substantiate the claim. Instead, the bloc called for an immediate “international response” and urged Russia and Iran to use their influence to prevent any similar incidents in future.

Damascus rejected the accusations, calling them “boring and inconclusive propaganda.” Only countries that “speculate on the blood of civilians and support terrorism in Syria” could be convinced by such reports, a Syrian Foreign Ministry official told SANA news agency. They pointed out that similar allegations emerge every time the Syrian Army makes advances in its fight against terrorists. The official added that Damascus had warned about a pre-planned false-flag attack.

Tehran has denounced statements made by US officials, describing them as “baseless accusations” that could be used as a pretext for military actions against the Syrian Army.

Meanwhile, the US administration appears to be already considering a potential response to the alleged chemical incident. “We’ll be reviewing the situation later today,” US Treasury Secretary Steven Mnuchin told CBS, commenting on a possible response. He refused to outline any particular options that are being considered, but said that Donald Trump and his national security team will be reviewing “all different alternatives.” Asked about the possibility of another US strike, the president’s Homeland Security Advisor Thomas Bossert said: “I wouldn’t take anything off the table.”

This is not the first time that reports of chemical attacks pinned on Damascus have surfaced on social media.

Moscow had warned that unconfirmed reports of atrocities and false-flag chemical incidents were likely to appear at a time when militant factions are losing ground in Syria. The latest report came as the Syrian Army pushed to liberate the remaining militant-occupied settlements in the Damascus suburb of Eastern Ghouta, with the city of Douma being the last such city in the area.

It comes as Jaysh al-Islam militants holding the city of Douma reportedly held talks with government forces and agreed to leave the enclave. Damascus said on March 31 that nearly all militant-held settlements in Ghouta were liberated, and a major Syrian highway had been cleared after a seven-year militant blockade.

In February 2018, Syrian troops began the operation to retake the area that has been under militant control since 2012, and Russia brokered the creation of humanitarian corridors to allow locals to escape the siege. A total of 153,240 people have left the area through humanitarian corridors since the start of the operation, according to the Russian Defense Ministry’s Center for Syrian Reconciliation.