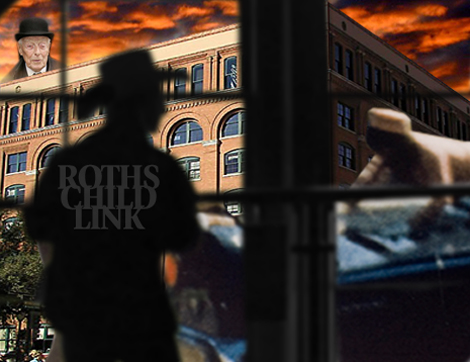 Dozens of new books and reports from diverse sources purporting to bring out “the truth at last” about the John F. Kennedy assassination on its 50th anniversary are suspiciously ignoring the very real Rothschild connection to the JFK conspiracy.

Right now the big push is to pin blame for the assassination on former Vice President Lyndon Johnson. The “LBJ Killed JFK” theme is rampant, even in the self-styled “alternative” media.

However, AMERICAN FREE PRESS is pleased to be the first publication ever to report on the findings of Maurice Phillipps—an otherwise unheralded researcher —who uncovered the never-before-revealed Rothschild banking dynasty connection to a key player linked to the JFK conspiracy.

Here’s the story, one which should force JFK researchers—at least the honest ones—to take a whole new look at the death of the president.

Today, although the JFK assassination is the focus of a media frenzy, many writers avoid delving into (or even mentioning) New Orleans District Attorney Jim Garrison’s unsuccessful 1969 prosecution of trade executive Clay Shaw for involvement in the JFK conspiracy, knowing Garrison had turned up leads pointing in some uncomfortable and controversial directions.

In fact, when Garrison launched his investigation of Shaw he had unwittingly unearthed the “Rothschild connection” to the JFK conspiracy, although Garrison himself apparently didn’t realize it at first. This explains why there was such a concerted effort—coming from the highest levels—to derail and destroy the hard-driving prosecutor.

While many first heard of Garrison’s prosecution of Shaw through Oliver Stone’s film “JFK”—which presented the JFK conspiracy as the work of LBJ and the military brass, aided by rogue Central Intelligence Agency operatives—there was much more that Stone left out.

Below, AFP provides an annotated overview of the astounding revelations by Canadian writer Phillipps whose work has heretofore been suppressed. Although Phillipps’s book, De Dallas a Montreal, is available only in French, Phillipps has written in English of his research on his well-documented website.

Once you learn of what Phillipps has uncovered, you’ll understand why so many truth seekers are so determined to suppress his findings.

Oliver Stone’s 1991 drama “JFK” focused on New Orleans District Attorney JimGarrison’s 1969 prosecution of trade executive (and longtime CIA asset) Clay Shaw for involvement in the JFK assassination conspiracy. But Stone diverted attention away from Shaw’s link to a key figure in the global operations of the Rothschild banking dynasty.

While Stone referenced—in passing—Shaw’s membership on the board of a Rome-based corporate shell known as Permindex, subsidiary of another entity, the Centro Mondiale Commerciale, which Stone portrayed as a CIA front, he provided only a sliver of the much bigger picture.

Documents unearthed by Canadian author Maurice Phillipps demonstrate beyond question that Shaw’s associate on the board of Permindex (its chief executive officer and primary shareholder), Louis Bloomfield of Montreal, was a longtime attorney for the Rothschild dynasty, particularly for Baron Edmund de Rothschild of London, going back as far as World War II.

Having studied Bloomfield’s private files, which Bloomfield donated to the Canada National Archives, Phillipps found what he describes as “many documents” revealing the Rothschild connection which heretofore has remained unknown except to those who explored Phillipps’s website.

Although Bloomfield (who died in 1984) donated his papers to the archives contingent upon them being kept under wraps until 20 years after his death, Bloomfield’s widow sought to extend the restriction until 25 years after her death. This prompted Phillipps to file suit, the result of which was that in 2006 the Federal Court of Canada ordered the files released.

Documents indicate Bloomfield was so close to Rothschild that he (Bloomfield) incorporated (in Canada)—and was a shareholder of—Tri Continental Pipe Line Ltd. (described by Phillipps as “a major Rothschild company”) to which Israel granted a 49-year exclusive right on use of a 16-inch pipeline between the Red Sea and Haifa in Israel.

The Israeli connection is no surprise. The Rothschilds have been Israel’s foremost patrons. In addition, Bloomfield and Montreal liquor baron Sam Bronfman—the head of the World Jewish Congress, with whom Bloomfield was also closely associated—were among a clique of money kings who, in the 1950s, bankrolled Israel’s secret nuclear arms program. According to Israeli author Michael Karpin, Israeli Prime Minister David Ben-Gurion referred to those donors as “consecrators,” suggesting, as Karpin noted, “in Ben-Gurion’s eyes, the nuclear project was holy.”

While Phillipps has never suggested Bloomfield was involved in any way in the JFK assassination, he has pointed out that Bloomfield’s Rothschild connection has been otherwise ignored.

Phillipps’s findings on the Rothschild-Bloomfield link also put to rest the rumor that Permindex was proof of “Nazi” involvement in the JFK conspiracy, a patently ridiculous theme propounded by one Mae Brussell whose father, Rabbi Edgar Magnin, was spiritual leader of the Jewish movie moguls in Hollywood.

In this same realm, Phillipps has uncovered documents indicating that, in Bloomfield’s words, “the guiding genius” behind Permindex was Rome-based Giorgio Mantello—born George Mandel, a Romanian Jew—whom Bloomfield described as a “33rd degreeMason with the closest connections in the highest diplomatic circles.”

Mantello was clearly no Nazi. In 1989, then-United States Representative Charles Schumer (D-N.Y.)—a Jewish leader in Congress—introduced a bill to award a congressional gold medal to Mantello, describing him as “truly one of the great unsung heroes of the World War II era . . . one of the most outstanding examples we have of a single individual . . . mobilizing the world against the atrocities of Nazi Germany.”

Declaring Mantello “saved nearly 30,000 Jews from almost certain death in the Holocaust, and perhaps hundreds of thousands more,” Schumer hailed him as responsible for disclosing the “Auschwitz Protocol,” vaunted as the first publicizedclaim of mass murder of Jews at the Auschwitz labor camp in Poland.

(That the Auschwitz Protocol was a fraud has been proven by a host of historians whose writings are available from THE BARNES REVIEW.)

Schumer also said, “Mantello was extremely useful to both the American and British intelligence services . . . [having] slipped millions of dollars of Swiss technical instruments that were necessary for the war effort out of Axis-surrounded Switzerlandand into Allied hands.”

How and why Clay Shaw of New Orleans ended up in association with the Permindex operation is no longer a mystery.

Shaw’s closest friends, who provided the funds for his defense against Garrison—the powerful Stern family, leaders of the New Orleans Jewish community—were primary shareholders in the Apollo, Pennsylvania-based NUMEC nuclear facility from which American nuclear materiel was illicitly channeled to Israel with the collaboration of CIA chief of counterintelligence, James Angleton, a devoted ally of Israel as head of the CIA’s Mossad desk.

Though avoiding the Mossad connection, many researchers now say Angleton was the key CIA figure in the JFK conspiracy.

The Sterns also owned WDSU radio and television, which hyped Lee Harvey Oswald as a “pro- Castro agitator” at precisely the time Shaw was acting as a handler for Oswald in the summer of 1963 while Oswald was in New Orleans being set up as the “patsy” in the JFK conspiracy.

So Shaw’s Rothschild—and Mossad—connection via Permindex was solidified by the Stern link to Israel’s nuclear weapons program we now know JFK was so determined to stop, another point ignored by most JFK writers.

All told, a variety of evidence indicates Permindex fronted for a Mossad operation funding Israel’s drive to assemble the atomic bomb.

A primary Permindex shareholder and the chief depository for its funds—the Banque De Credit Internationale [BCI] of Geneva—was the fiefdom of Tibor Rosenbaum, a Mossad arms procurement official referred to as one of Israel’s “founding fathers.”

BCI was also chief money launderer for the crime syndicate of Israeli loyalist Meyer Lansky, business partner of the aforementioned Sam Bronfman, associate of Louis Bloomfield and the Rothschilds.

In fact, Lansky’s Israeli biographers note that “after Israel became a state, almost 90% of its purchases of arms abroad was channeled through Rosenbaum’s bank. The financing of many of Israel’s most daring secret operations was carried out through the funds in [BCI].”

We now understand why Oliver Stone chose not to pursue these avenues when he made “JFK.”

The man who bankrolled Stone’s film, Israeli arms dealer Arnon Milchan—listed as “executive producer”—was a primary player in Israel’s nuclear program. Head of a global empire in weapons, chemicals, electronics, aerospace and plastics—operating in the Rothschild sphere—Milchan (now perhaps the biggest mover in Hollywood) has been described as “Mr. Israel,” as “secretive yet famous, but only among famous people,” and is a close friend and business partner of Rothschild-sponsored media baron Rupert Murdoch.

Although Milchan—partnered with the interconnecting Rothschild-controlled media conglomerates Havas and StudioCanal in financing Stone’s extravaganza—paid author Jim Marrs a reported $200K for rights to his book Crossfire (a partial foundation for Stone’s film), Jim Garrison’s family had to go to court to claim promised proceeds from “JFK” after Milchan claimed the blockbuster turned a loss. On a procedural technicality, a federal court ruled for Milchan against the Garrisons.

Well-known JFK writer, A.J. Weberman—a U.S.-Israeli dual citizen—says Garrison once showed him an unpublished novel Garrison had written which Weberman says was “a fictional work that placed the blame for John Kennedy’s death on the Mossad.”

Although Garrison did publish a JFK novel, The Star-Spangled Contract, it did not allude to Mossad involvement. But if Weberman is to be believed, Garrison had ultimately figured out the Rothschild-Israeli connection to the JFK conspiracy.

And that says much about what many of today’s JFK researchers are choosing to ignore.