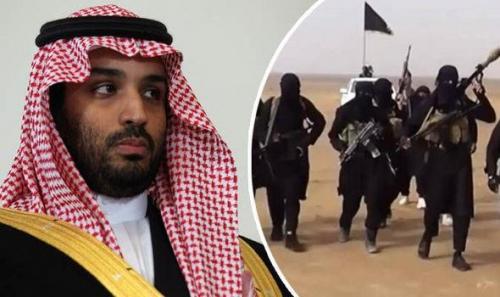 During the same week Saudi Arabia’s crown prince Mohammed bin Salman (MbS) admitted to the The Atlantic’s Jeffrey Goldberg that Saudi nationals have funded terror groups, a prominent Georgetown University counterterrorism expert and field researcher has published his findings based on extensive interviews with former ISIS members which identifies Saudi Arabia as a key source of the now defunct Islamic State’s prior rapid growth.

The findings were summarized in the Government and Technology Services Coalition’s Homeland Security Today online journal, and authored by Georgetown University professor Ahmet Yayla, who during the past four years has interviewed over 40 ISIS defectors in Turkey while conducting on the ground research along Syria’s border.

“The majority of the ISIS shaykhs (imams and teachers) who were preaching in ISIS-controlled territories and schools were from Saudi Arabia.”

“The majority of the ISIS shaykhs (imams and teachers) who were preaching in ISIS-controlled territories and schools were from Saudi Arabia.” https://t.co/2zSHObVjRa

The study focuses specifically on ‘Salafist jihadism’ – a term often used interchangeably with Wahhabism – as “the same root” shared by both al-Qaeda and ISIS:

Salafism is usually described as an ultraconservative, puritanical, grim and fundamentalist branch within Sunni Islam established on the teachings of the 13th-century scholar Ibn Taymiyyah, whose ideas were introduced by puritanical scholar Muhammed ibn Abd al-Wahhab in the Arabian Peninsula during the mid-18th Century. Wahhab advocated a return to the traditions of the first generations of Muslims (the salaf).

ISIS and al-Qaeda appropriate foundational texts of al-Wahhab, including The Book of Monotheism (Kitab at-Tawhid), in their curriculum, in their Sharia (ideological) training in military camps, online training and the school systems they control.

Additionally, several ISIS defectors I interviewed specifically told me how al-Wahhab’s Kitab at-Tawhid was the chief and the most important part of their training, a book also widely and historically adopted by today’s Saudi Arabia. Furthermore, I observed that Salafist literature and books were adopted by terrorists including al-Qaeda for their indoctrination and training during the investigations I carried out as a counterterrorism police chief in Turkey.

Notably, one of Saudi Arabia’s most visible sheikhs – who recently held the title of ‘Imam of Kaaba, the Grand Mosque of the Prophet Muhammad in Mecca’ – admitted that ISIS is a product of Saudi Salafi/Wahhabi Islam, which has been described by scholars and historians alike as the official state religion of Saudi Arabia, despite MbS’ feigning confusion over the issue during his recent Atlantic interview.

My favourite part of the MBS interview in the @TheAtlantic. This made me LOL so hard pic.twitter.com/YxDkNjdjGU

Sheikh Adel al-Kalbani, the former Imam of Kaaba, the Grand Mosque of the Prophet Muhammad in Mecca, and a Salafi himself, openly and sincerely admitted that “ISIS is a true product of Salafism” and we must deal with it with full transparency.

But the key section of the summary study Homeland Security Today, which links the highest levels of the Saudi state (including Saudi princes) with ISIS terrorism is worth quoting in full.

According to the below excerpt from the summary findings, Saudi Arabia spreads Salafist terror ideology “all over the world”:

“The fact is, some Saudi princes, clerics, and charities for decades have been pouring out billions of dollars to promote their understanding of Islam, Wahhabism. They have found willing partners among the vulnerable populations in the Central Asian and Afghan-Pakistani regions, Africa, the Balkans and even in Europe. These funders indirectly assist ISIS and al-Qaeda-friendly organizations to fast-track their recruitments process on their behalf. In the leaked U.S. embassy cables, it was openly addressed that Saudi Arabia was ‘a critical source of terrorist funding’ where the money is mostly spent on training of Wahhabi clerics, production and distribution of Wahhabi textbooks, media outreach and donations to local schools or cultural centers.

Thanks to the Saudis spreading Salafism all over the world, these terrorists reach ideologically ripe people among their targeted groups who are already educated by the Wahhabis.

For a more comprehensive and effective long-term counterterrorism policy, the world should understand that regardless of the political costs and outcomes there is no true dealing of jihadi terrorism without countering the Salafist jihadist ideology. The majority of the ISIS shaykhs (imams and teachers) who were preaching in ISIS-controlled territories and schools were from Saudi Arabia and hence had the kunya of ‘al- Jazrawi.’ Wahhabi teachings around the world with Saudi-supported Imams have established the grounds for easier jihadist terrorism recruitments.”

Though MbS was clearly lying as well as attempting to dodge the topic altogether when he awkwardly told Jeffrey Goldberg, “There is no Wahhabism, we don’t believe we have Wahhabism,” he was right about one thing: the US itself led the way in promoting the spread of Wahhabi jihad near the end of the Cold War.

He isn’t lying here:
“Mohammed said that investments in mosques and madrassas overseas were rooted in the Cold War, when allies asked Saudi Arabia to use its resources to prevent inroads in Muslim countries by the Soviet Union.” https://t.co/1wq0bsXmKe

The crown prince was recently quoted by the Washington Post while in DC: “Mohammed said that investments in mosques and madrassas overseas were rooted in the Cold War, when allies asked Saudi Arabia to use its resources to prevent inroads in Muslim countries by the Soviet Union.”

And MbS repeated these comments to The Atlantic: “This is what America wanted us to do.”