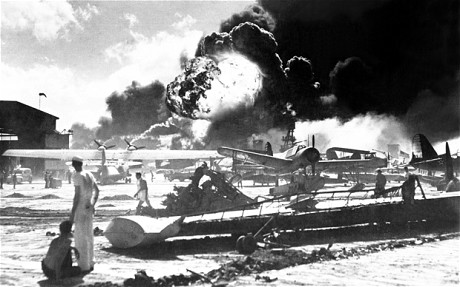 On the 70th anniversary of Pearl Harbour, the attack that propelled America into the Second World War, a declassified memo shows that Japanese surprise attack was expected.

By Jacqui Goddard in Miami
The Telegraph

It was described by President Franklin D.Roosevelt as “a date that will live in infamy”, a day on which the slaughter of 2,400 US troops drew America into Second World War and changed the course of history.

Now, on the 70th anniversary of Japan’s devastating bombardment of the US Pacific Fleet at Pearl Harbour, Hawaii, evidence has emerged showing that President Franklin D.Roosevelt was warned three days before the attack that the Japanese empire was eyeing up Hawaii with a view to “open conflict.”

The information, contained in a declassified memorandum from the Office of Naval Intelligence, adds to proof that Washington dismissed red flags signalling that mass bloodshed was looming and war was imminent.

“In anticipation of possible open conflict with this country, Japan is vigorously utilizing every available agency to secure military, naval and commercial information, paying particular attention to the West Coast, the Panama Canal and the Territory of Hawaii,” stated the 26-page memo.

Dated December 4, 1941, marked as confidential, and entitled “Japanese intelligence and propaganda in the United States,” it flagged up Japan’s surveillance of Hawaii under a section headlined “Methods of Operation and Points of Attack.”

It noted details of possible subversives in Hawaii, where nearly 40 per cent of inhabitants were of Japanese origin, and of how Japanese consulates on America’s west coast had been gathering information on American naval and air forces. Japan’s Naval Inspector’s Office, it stated, was “primarily interested in obtaining detailed technical information which could be used to advantage by the Japanese Navy.”

“Much information of a military and naval nature has been obtained,” it stated, describing it as being “of a general nature” but including records relating to the movement of US warships.

The memo, now held at the Franklin D.Roosevelt Presidential Library and Museum in upstate New York, has sat unpublicised since its declassification 26 years ago. Its contents are revealed by historian Craig Shirley in his new book “December 1941: 31 Days that Changed America and Saved the World.”

Three days after the warning was delivered to the White House, hundreds of Japanese aircraft operating from six aircraft carriers unleashed a surprise strike on the US Navy’s base at Pearl Harbour, wiping out American battleships, destroyers and air installations. A total of 2,459 US personnel were killed and 1,282 injured.

Conspiracy theorists have long claimed that Roosevelt deliberately ignored intelligence of an imminent attack in Hawaii, suggesting that he allowed it to happen so that he would then have a legitimate reason for declaring war on Japan. Up to that point, public and political opinion had been against America’s entry into what was seen largely as a European war, despite Roosevelt’s private support for the Allies’ fight against the so-called Axis – Germany, Italy and Japan.

But Mr Shirley said: “Based on all my research, I believe that neither Roosevelt nor anybody in his government, the Navy or the War Department knew that the Japanese were going to attack Pearl Harbour. There was no conspiracy.

“This memo is further evidence that they believed the Japanese were contemplating a military action of some sort, but they were kind of in denial because they didn’t think anybody would be as audacious to move an army thousands of miles across the Pacific, stop to refuel, then move on to Hawaii to make a strike like this.”

As with the September 11 terrorist attacks in 2001, US leadership was guilty of a “failure of imagination” in its inability to translate warning signs into a specific prediction of the horror that lay ahead, he said.

Roosevelt declared war on Japan the day after the blitz on Pearl Harbour. Japan, Germany and Italy reciprocated with their own declarations, but America’s involvement in the war turned the tide against the Axis powers and ultimately led the Allies to victory.

Americans, who a year previously had been assured by Roosevelt that they would not be sent to fight foreign wars, suddenly found their fates transformed. The US military swelled, with 16 million heading off to war, and women took on new and more widespread roles in the workforce, and in the military.

Washington became a global power base and the War Powers Act gave the president supreme executive authority. The “America First” movement, which had lobbied against the country’s entry into the war and at its peak had 800,000 members, disbanded within days.

The 70th anniversary of the tragedy at Pearl Harbour is being marked with a week of commemorative events in Hawaii. They culminate on Wednesday in a minute’s silence and a ceremony of remembrance overlooking the wreck site of the USS Arizona, which sank with the loss of 1,177 lives.

Of the 29,000 survivors who joined the Pearl Harbour Survivors Association following its foundation in 1958, only ten per cent are still alive, most aged in their late 80s and beyond. With so few left, and most unable to travel to reunions or help with the group’s administration, the PHSA will close down after the anniversary.

“It’s going to be a poignant moment. Sooner or later we’re all going to be gone,” said Duane Reyelts of St Augustine, Florida, who was a 19-year-old signalman aboard the USS Oklahoma when it was bombed at Pearl Harbour.

He will turn 90 later this month, but still has vivid memories of waking in his bunk after working the midnight watch, when the ship’s warning system sprang to life with the order: “All hands man your battle stations.”

Seconds later, a torpedo hit with a thunderous explosion. He could hear vast amounts of water pouring in below, and eight more torpedoes. The ship turned over, forcing him to scramble up a wall to escape.

“I happened to be small enough to get out of a porthole. When I got out, I was sitting on the bottom of the ship and I couldn’t believe what I was seeing: planes were attacking and the whole harbour seemed to be on fire. Bodies in the water, smoke, screams.” he said.

He hesitated to jump in the water, but had no choice as a stream of machine-gun fire rained around him from the aircraft overhead. He swam to the USS Maryland, where he joined a line of sailors hauling ammunition.

“The Navy and armed forces must have had notification that something could happen; being a signalman on the bridge and being on lookout, that was something we were told – if you see a periscope out there, it may not be ours. But we never really imagined an assault of this nature,” he said.

He will re-tell his story once more during a remembrance service aboard a US Navy vessel on Wednesday, when the ashes of Pearl Harbour veterans who have died during the last year will be scattered at sea.

“Those of us who are left try to tell our stories as much as possible, not just for history’s sake but because America needs to be kept alert today,” he said. “America needs to remember the lessons of Pearl Harbour.”