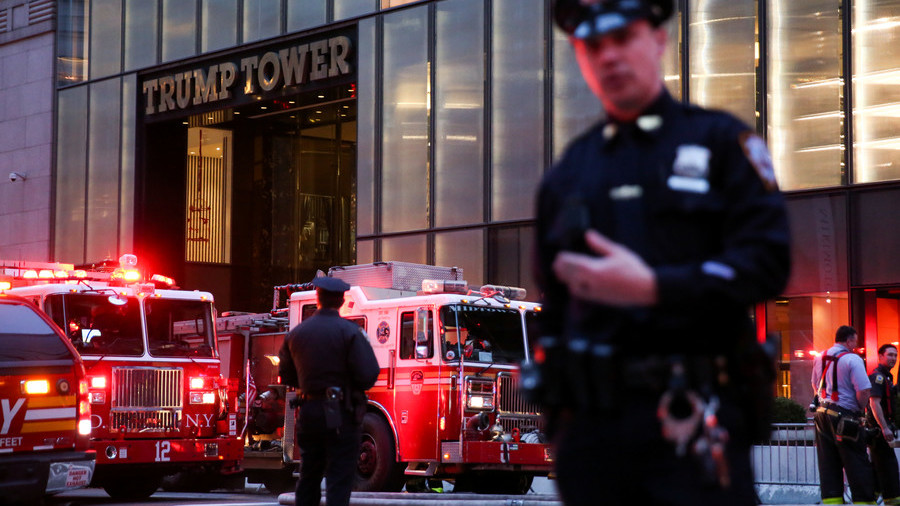 First responders work on a fire in a residential unit at Trump Tower in Manhattan. April 7, 2018 © Amr Alfiky / Reuters

The New York fire department has dispatched dozens of units and over 120 firefighters to tackle a four-alarm blaze that erupted on the 50th floor of Trump Tower in Manhattan.

One person has died after suffering serious injuries in the blaze, while four firefighters received non-life-threatening injuries, the New York City fire department said. FDNY crews were called to the 50th floor of the building on Fifth Avenue shortly before 6pm Saturday.

We found fire on the 50th floor of the building. The apartment was entirely on fire. Members pushed in heroically, they were knocking down the fire and found one occupant of the apartment who is in critical condition –#FDNY Commissioner Nigro gives update on 721 5th Ave 4th alarm

Thirty-six units and 126 firefighters responded to the four-alarm fire. People have been evacuated from the building.

#FDNY members remain on scene of a 4-alarm fire, 721 5th Ave in Manhattan. There is currently one serious injury to a civilian, and 3 non-life-threatening injuries to Firefighters, reported pic.twitter.com/c7qeOlDVcf

The extent and the severity of the fire was not immediately clear. “Smoke and debris,” one eyewitness wrote next to his video post of the fire, which shows smoke rising above Manhattan.

There is a fire right now in Trump Tower. Was small and then something happened where the size doubled in seconds! pic.twitter.com/NnFNHEfJBg

#FDNY members remain on scene of a 4-alarm fire, 721 5th Ave in Manhattan. There is currently one serious injury to a civilian reported. (Photo credit: @nycoem) pic.twitter.com/0Smiljyupg

“My Navy friend Kent Sasagawa and I had been in the tower minutes before, as some personnel rushed by us into the Fire Command room. We thought nothing of it,” Michael Lukiman said on Twitter. “Walking out and around the block, we saw people spectating. Looking up, the flames just started to appear.”

Melania Trump and Barron Trump are both in Washington, DC, according to the first lady’s spokeswoman, Stephanie Grisham, NBC New York reports. Meanwhile, President Donald Trump reassured the guests at his iconic Manhattan building, tweeting that the fire was “very confined” and is now “out.”

“Firemen (and women) did a great job. THANK YOU!” Trump tweeted.

Saturday’s fire at Trump Tower follows an incident three months ago, when a minor fire broke out in a cooling tower on the roof of the building. In the January 8 incident, two people were treated for minor injuries.