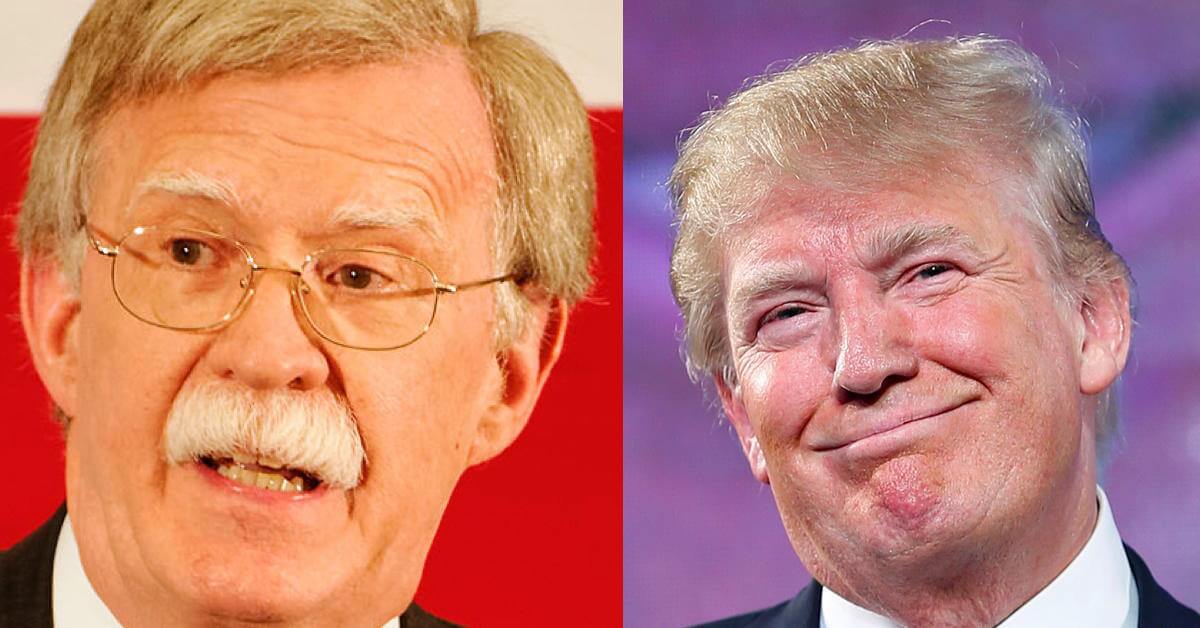 Former Ambassador John Bolton is reportedly on the Trump administration’s short list for sec state. Even though no official announcement has been made, Bolton’s consideration is already drawing rebukes from libertarian-minded Republicans like Rand Paul, who on Tuesday called Bolton’s foreign policy views “unhinged.” Paul’s spot on the Senate Foreign Relations Committee gives him significant sway over the nomination of Bolton or anyone else as sec state, but you don’t have to share Paul’s skepticism about Pindostan’s interventionalist foreign policy to be terrified by the prospect of having Bolton in charge of the State Dept. Here’s a brief reminder of some of the terrible things Bolton has done (or wanted to do) in the realm of foreign policy:

Bonus John Bolton awfulness:
He helped cover up the Iran-Contra scandal.
He founded a PAC with the goal of electing more hawkish candidates. Donors received this mustachioed coffee mug.
He wants to “cause Putin pain,” whatever that means.
He supports the drone warfare program created under Bush 43 and expanded under Obama 44.
He fears we might miss an opportunity to go to war with North Korea.

As the impact of Donald Trump’s presidential victory is settling in among the professional political and pundit ranks in Washington, several neocons from the Bush 43 administration, many of whom opposed Trump’s candidacy from the outset, are making their play for top jobs in Trump’s transition team and administration. The most worrisome of these opportunists is Bush 43’s Senate-rejected ambassador to the UN John Bolton, who is among the most radical of neocons who helped craft Bush 43’s disastrous foreign policy. Bolton, who claims to be tough on terrorism, especially Iranian “terrorism”, once advocated blowing up the top 10 floors of the UN Secretariat building in New York. Bush 43 gave Bolton a temporary recess appointment to lead the delegation to the UN precisely because Bolton had long advocated doing away with the UN. Bolton’s problems with the UN stemmed from the neocon meme that the UN was “biased” because it often opposed Israeli aggression and expansionism in the Middle East. No sooner had Trump began the process of selecting senior members of his administration than Bolton’s name was floated as a possible Sec State or National Security Adviser. Bolton and Trump share some foreign policy views, including moving the Pindosi embassy in Israel from Tel Aviv to Jayloomia, and tearing up the Iranian nuclear agreement (JCPOA). They differ on Pindosi policy toward Syria, Russia, and Ukraine. Trump is publicly in favor of restoring closer relations with Russia, and allying with Russia and Syria in battling Daesh and other Jihadis, as well as recognizing the retrocession of Crimea to the Russian Federation.

In 2002, Bolton described Syria as a “rogue state” and said that it and Iraq could “expect to become our targets.” Bolton also backs the Jihadi uprising against Assad. In Oct 2015, Bolton argued with Israeli Brig-Gen Shafir at a conference at Beth Jacob synagogue in Beverly Hills about Assad’s continuation in power in Syria. Shafir said he was concerned that Assad’s ouster would bring to power in Damascus forces that would imperil Israel’s security. Bolton, who fancies himself an expert on everything but who is only a slightly-functional moron on most things, advanced the Likud/ neocon belief that a Jihadi government in Syria was preferable to Assad. In a Jul 2016 interview on Bannon’s radio show, Bolton had sharp words for Trump over his statement to the NYT that as president, he would only assist NATO nations in the event of a Russian attack after reviewing whether those NATO nations had fulfilled their NATO financial obligations to Pindostan. Bolton demanded that Trump retract his statement immediately, and alter his position on Russia to one of Ronald Reagan’s “peace through strength.” Parroting other neocon talking points, Bolton accused Trump of “encouraging Russian aggression.” Bolton defended huge military spending on NATO by claiming:

(Russia is) a dagger at the heart of the most successful military/ political alliance in human history. … Fewer Pindostanis will die if we deter Russia or other aggressors from invading.

Now Trump is reportedly considering Bolton for a senior level foreign policy position in his administration. Steve Bannon became the Trump’s campaign’s chief executive after Trump fired his previous campaign manager Paul Manafort, amid corporate neocon media claims that Manafort’s business links with Russia and ex-Pres Yanukovych of Ukraine posed a “national security” problem for the Trump campaign. Bannon is now being proffered as Trump’s White House chief of staff. Another prominent neocon being mentioned for a senior post in Trump’s foreign policy apparatus is Bolton’s former press spox and factotum at the UN, Richard Grenell. Serving as the national security spokesman for Mitt Romney in 2012, Grenell soon resigned after his openly gay orientation infuriated Romney’s evangelical Christian and Mormon supporters. While serving as Bolton’s chief personal assistant at the UN, Grenell infuriated diplomats, UN staffers, and the UN press corps with his brash style, which mimicked that of his boss in all respects.

In Mar 2011, Bolton urged Pindostan to assassinate Muammar Qaddafi, something Sec State Hillary Clinton authorized later that year and then laughed about, after Qaddafi was sodomized to death with a bayonet, on-camera. Trump on the other hand said he never supported the invasion of Libya. Trump had reportedly discussed plans for a massive Trump resort on Libya’s Mediterranean coast with Qaddafi’s ambassador in Washington, at his Mar-a-Lago estate in Palm Beach. The resort would have been established through a licensing agreement between Libya and the Trump organization. When Qaddafi visited the UN in 2009, and NY Mayor Michael Bloomberg refused to allow Qaddafi to pitch his tent in Central Park, Trump offered his Westchester NY estate. Trump’s friendship and business plans with Qaddafi, which included investments for Libya’s $7b sovereign wealth fund, ran totally counter to Bolton’s call for the Libyan leader’s assassination. On Ukraine, Bolton called for Russia to be ejected from the G8 and have punishing economic sanctions imposed on it. Trump also has a mixed record on Ukraine, and has praised the government of Sakkashvili in the Republic of Georgia, though Saakashvili is a known acolyte of Trump’s nemesis, George Soros. Saakashvili later fled Georgia amid a criminal investigation and today he is a citizen of Ukraine, where he just organized a neocon political party after resigning as the governor of the Odessa region.

Bolton remains steadfast in his opinion that the Bush administration’s decision to invade and occupy Iraq was a correct one. Trump said numerous times during the campaign that the decision by the Bush administration was wrong. However, in another example of Trump recycling discredited neocons in his embryonic administration, former CIA director James Woolsey, fired by Clinton 42 in 1994, is being mentioned as a senior member of Trump’s administration. It was Woolsey who later championed the cause of the most fraudulent front organization ever cobbled together by the CIA, the Iraqi National Congress of Ahmed Chalabi. Propped up by the lobbying firm of Black, Kelly, Scruggs & Healey (BKSH Associates), Woolsey and Chalabi convinced both the Clinton 42 and Bush 43 administrations to commit in principle to Saddam’s overthrow. BKSH was formed in 1996 as the result of a merger of Black, Manafort, Stone and Kelly with another lobbying firm. The partners included Paul Manafort, Trump’s fired campaign manager, and Roger Stone, one of Trump’s initial campaign advisers. Woolsey and Chalabi were also involved in the antics of “Curveball”, still believed by the CIA to be the worst phony intelligence source it ever employed, who provided hundreds of pages of bogus Iraqi intelligence documents on what turned out to be non-existent Iraqi mobile biological weapons laboratories. That phony «evidence» was partly used as justification for the invasion and  destruction of Iraq.

There are several other notorious neocons being considered by Trump’s transition team, headed by Mike Pence aided by Trump’s son-in-law Jared Kushner. Ousted transition team chief Chris Christie got the pink slip because Kushner recalled how in 2005, then-Federal Attorney Christie prosecuted Kushner’s father, billionaire real estate magnate Charles Kushner, for tax evasion, illegal campaign contributions, and Mafia-like witness tampering. The elder Kushner served one year in federal prison and his son never forgave Christie for seeking a prison sentence. Jared Kushner’s newspaper, the NY Observer, is a champion of neocon causes, especially concerning maintaining a hard line on Russia, China, Palestine, Venezuela, Cuba, and other countries. No good ever comes from harboring neocons. Foolhardy neocon foreign operations ruined Jimmy Carter’s administration and almost subjected Ronald Reagan to impeachment. Neocons, some holdovers from the Bush 43 administration, plunged Ukraine, Syria, Libya and Yemen into civil war, and Venezuela, Egypt, Tunisia and Honduras into civil strife. Considering who Trump is now surrounding himself with, his administration and Pindostan alike are in for a very stressful time.

many more than 5 horrific things about bonkers bolton