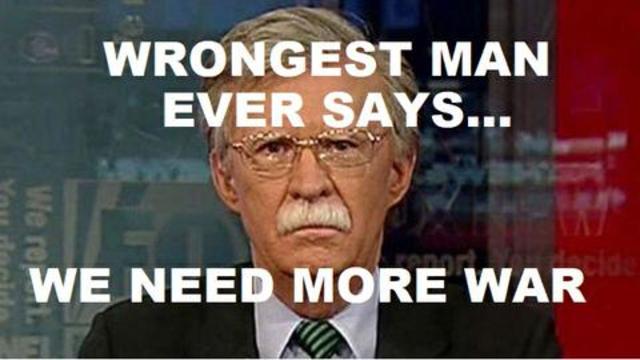 There have been multiple reports that President Donald Trump is unhappy with his National Security Adviser, Lt. Gen. H. R. McMaster. As rumors increased about a McMaster departure so, too, did speculation that George W. Bush’s never-confirmed ambassador to the United Nations, the arch-neoconservative John Bolton, might be named as McMaster’s replacement. Bolton has reportedly been seen at the White House on several occasions briefing Trump and other high-level officials.

John Bolton as National Security Adviser, with Nikki Haley in Bolton’s old job at the U.N. and fundamentalist Christian dominionist Mike Pompeo moving from CIA director to replace Rex Tillersonas Secretary of State, means that the neocons — never happy with the prospects of a Trump administration – will, once again, be in the driver’s seat of American foreign policy after a nine-year hiatus. Bolton’s tenure at the U.N. was punctuated by his own undiplomatic outbursts, as well as those of his spokesman, Richard Grenell, Trump’s nominee to be US ambassador to Germany. Bolton strenuously pushed the neocon foreign policy line, as spelled out in the charter for the movement founded in 1997, the Project for the New American Century (PNAC).

Bolton is a staunch interventionist, which would appear at odds with the non-entanglement foreign policy espoused by Trump during the 2016 presidential campaign. However, as Trump entered his second year in office, it was apparent that one branch of the neocons, the most hawkish element and one linked to the Christian fundamentalist wing of the Republican Party, had captured control of the foreign policy levers of the Trump White House. Bolton has called for the US to declare war on Iran and North Korea and he has advocated for a US troop deployment to Syria to combat the forces of President Bashar al-Assad.

The mere fact that Bolton has been a recent frequent guest at the Trump White House and that Trump reportedly values Bolton’s advice, is a threat to global peace.

On June 29, 2017, long after Trump sought Bolton’s advice, the former ersatz US ambassador to the UN wrote the following neocon screed for Fox News:

“There are signs the Assad government may be planning another chemical attack. American pilots have struck forces threatening our allies and shot down a Syrian plane and Iranian-made drones. The probability of direct military confrontation between the US and Russia has risen . . . Instead of reflexively repeating President Obama’s errors, the Trump administration should undertake an ‘agonizing reappraisal,’ in the style of John Foster Dulles, to avoid squandering the victory on the ground . . . In Syria, Kurdish forces fighting ISIS [Islamic State] are linked to the Marxist PKK in Turkey. They pose a real threat to Turkey’s territorial integrity.”

Bolton wants the United States to declare the Muslim Brotherhood a terrorist organization and supports Trump’s backing of the Saudi Arabian and United Arab Emirates embargo against Qatar as punishment for its ties to both the Brotherhood and Iran. Bolton also wants added to the US terrorist list Iran’s Revolutionary Guard Corps (IRGC). Bolton is on record as favoring the creation of a new “secular” Sunni state in Iraq that would be bankrolled by Saudi Arabia. The new Sunni state, in Bolton’s view, would stymie the creation of a Shi’a arc of control extending from Iran through Iraq to Syria and Lebanon.

On the issue of Palestine, Bolton has demanded the abolishment of the U.N. Relief and Works Agency (UNRWA), which administers aid programs for Palestinian refugees. In May 2017, before accepting the Guardian of Zion Award from Bar-Ilan University in Jerusalem, Bolton told The Jerusalem Post that the “two-state solution” of Israel and an independent Palestinian state should be abandoned, Hamas, Fatah, and the Palestinian Authority disbanded, Gaza given to Egypt, and the West Bank divided between Israel and Jordan. Bolton cynically said he believes in a “three-state solution” with Israel, Egypt, and Jordan taking control of current Palestinian territory. While representing the Bush administration at the U.N., Bolton and his chief adviser Grenell were known for coordinating all of America’s votes on Middle Eastern matters with the Israeli delegation.

Bolton’s world view is to turn the clock back to the 1950s and the “containment” policy advanced by Secretary of State Dulles. In the 1950s, “containment” meant containing the Soviet Union. For Bolton, containment now applies to boxing in Iran, joining Turkey in defeating the Syrian Kurds because Bolton believes they are linked to a “Marxist” Kurdish party in Turkey, and seeking the overthrow of the Assad government in Syria. That Bolton has gotten the ear of Trump, whose world view is a mile wide and a half-inch deep, should trouble the Middle East, South Asia, and beyond.

Bolton’s neocon rhetoric on NATO is no less alarming. He wants membership in NATO fast-tracked for Ukraine and Georgia. Bolton as Trump’s national security adviser would help usher into the Trump White House Bolton’s fellow neocons ensconced at the American Enterprise Institute in Washington, where Bolton enjoys a senior fellowship. Bolton favored US military action to prevent to retrocession of Crimea to the Russian Federation. Bolton’s appointment as Trump’s national security adviser would avoid US Senate confirmation, which, for Trump, would mean no contentious Senate floor battle with such anti-Bolton Republicans as Senator Rand Paul of Kentucky.

In yet another hearkening back to the days of Dulles, Bolton has promoted an updated version of the discredited “domino theory” for the Western Hemisphere. President Ronald Reagan tried to convince the American public that if the Sandinista government was permitted to take root in Nicaragua, El Salvador, Guatemala, Honduras, and soon, Mexico, would fall to the Communists. Reagan warned that the Communists could then take over the US-Mexican border town of Harlingen, Texas because it was two-day’s driving time from Nicaragua. Bolton served in the Reagan State Department alongside such neocons as Elliott Abrams, the Assistant Secretary of State for Inter-American Affairs and the person behind Reagan’s “Communists in Harlingen” nonsense. It was also a so-called “domino theory” that was promoted by Bolton’s hero, Dulles, and his Cold War successors as Secretary of State to defend US military intervention in Southeast Asia to prevent Communism from spreading from China and North Vietnam to Thailand, Malaysia, and, eventually, even Sydney, Australia and Honolulu, Hawaii.

Bolton views the instability in Venezuela as a prelude for such anarchy spreading to Colombia and throughout South and Central America. Bolton believes that Cuba and Nicaragua are working hand-in-glove with Venezuela to destabilize Latin America and the Caribbean. Bolton opposed the normalization of US relations with Cuba and he supports Trump’s downgrading of those ties. Of course, Bolton fails to mention that it was under the Bush administration that repeated US attempts to destabilize Venezuela began and they never ceased. Bolton would rather see Venezuela fall under the control of a right-wing autocrat, such as those who gained power in Brazil, Argentina, and Chile from progressive presidents.

Bolton actually believes Iran is exploiting the political turmoil in Venezuela to gain access to the country’s uranium deposits. He also is convinced that Hezbollah has established a drug-running network in Latin America. Bolton has called on Trump to reassert the arcane Monroe Doctrine – proclaiming the Western Hemisphere as America’s domain – because of “Russian meddling” in Latin America. Bolton’s predilection for such conspiracy theories, while welcomed and highly sought in Republican Party cuckoo land, are not the product of sober intelligence analysis of world events. John Bolton, a dangerous madman, certainly has no place in any White House, particularly one that is already led by someone who is mentally unhinged.

Wayne Madsen is an investigative journalist, author and syndicated columnist. A member of the Society of Professional Journalists (SPJ) and the National Press Club.