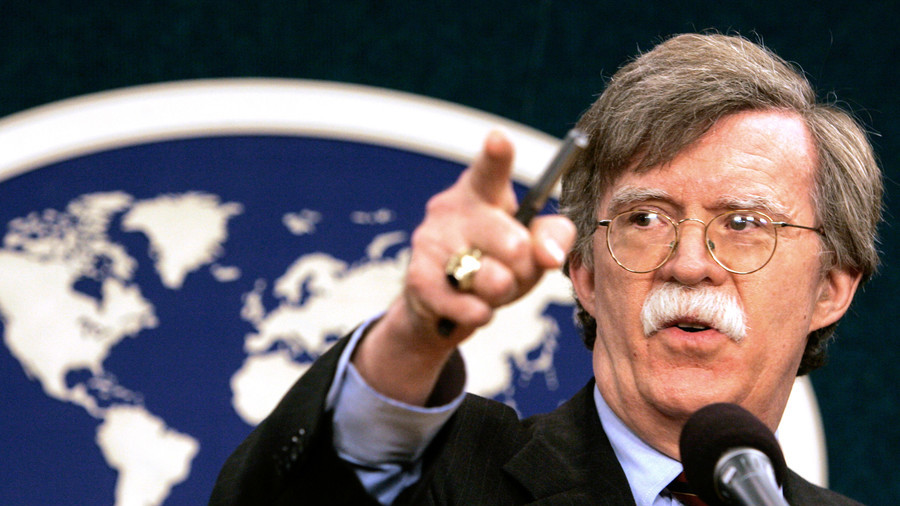 “I got to know John Bolton when he was the US ambassador to the United Nations,” Shaul Mofaz said at a conference of former IDF chiefs. “He tried to convince me that Israel should attack Iran.”

Mofaz, an Iranian-born Israeli who served as the defense minister at the time when Bolton headed the US mission at the UN, in turn advised the ultra-hawkish Republican against attacking Tehran. The former defense chief explained that he did not believe that a military strike on Iran would be a “wise” decision, for either Tel Aviv or Washington DC.

Bolton, an Iraq war apologist and an advocate of ‘military options’ in many other conflicts, is set to replace outgoing National Security Adviser Gen. HR McMaster on April 9, just days after CIA chief Mike Pompeo will supplant Rex Tillerson as head of US State Department. With these new key foreign policy leaders in place at the helm of the Trump administration, many politicians on Capitol Hill have raised concerns that Trump would be fully ready for war.

Trump announced Bolton’s appointment last Thursday, amid rising tensions between Tehran and Washington DC over the future of the 2015 nuclear agreement signed between P5+1 and the Islamic Republic. Unlike his predecessor Tillerson, Pompeo seems better aligned with Trump’s confrontational foreign policy when it comes to Iran. Bolton, for his part, looks like a perfect fit to pursue Trump’s maximum pressure agenda.

During the early months of the Trump administration, Bolton was approached by former White House Chief Strategist Steve Bannon to outline his plans to withdraw from the Iran nuclear deal, known as a Joint Comprehensive Plan of Action (JCPOA). The five-page memo, which allegedly never made it to Trump’s desk, was published in National Review after Bannon departed the White House. In short, Bolton outlined a strategic public relations campaign to convince the world that the US has a justified case for pulling out of the deal.

A harsh critic of Tehran, in 2015 Bolton wrote an op-ed article in the New York Times with the flashy title ‘To Stop Iran’s Bomb, Bomb Iran,’ arguing for a regime change in the central Asian country.

“The United States could do a thorough job of destruction, but Israel alone can do what’s necessary. Such action should be combined with vigorous American support for Iran’s opposition, aimed at regime change in Tehran,” he wrote at the time.

While the top Iranian leadership has yet to issue a comment on Bolton’s appointment, some of the country’s officials have already expressed apprehension over Bolton’s “shameful” return to power politics. “The use of hardline anti-Iran elements indicates that Americans are pushing for more pressure on Iran,” Alaeddin Boroujerdi, head of parliament’s National Security and Foreign Policy Committee said on Saturday.

“For a seemingly superpower country, it is shameful that its national security official would be receiving a salary from a terrorist sect,” Ali Shamkhani, secretary of Iran’s Supreme National Security Council, noted on Sunday, referring to Bolton’s support of the Mujahideen-e Khalq (People’s Mujahideen) group, which Iran considers a terrorist group.

John Bolton supports proactively bombing Iran and conducting a first strike on North Korea without provocation. Appointing him to be Nat Sec Advisor is a grave danger to the American people and a clear message from @realDonaldTrump that he is gearing up for military conflict.

In response to an avalanche of criticism on social-media outlining the danger of his appointment, Bolton told Fox News that he remains committed to “articulate” his many views to the president.

This is dangerous news for the country and the world. John Bolton was easily one of the most extreme, pro-war members of the Bush Administration.

Imagine what havoc he could wreak whispering in Donald Trump’s ear…I hear the drumbeats of war. https://t.co/A6ZIyORAM7

“I’ve said what I’ve said about the Iran deal before,” said Bolton. “Look, I have my views, I’m sure I’ll have a chance to articulate them to the president… If the government can’t have a free interchange of ideas among the president’s advisors, then I think the president is not well served.”