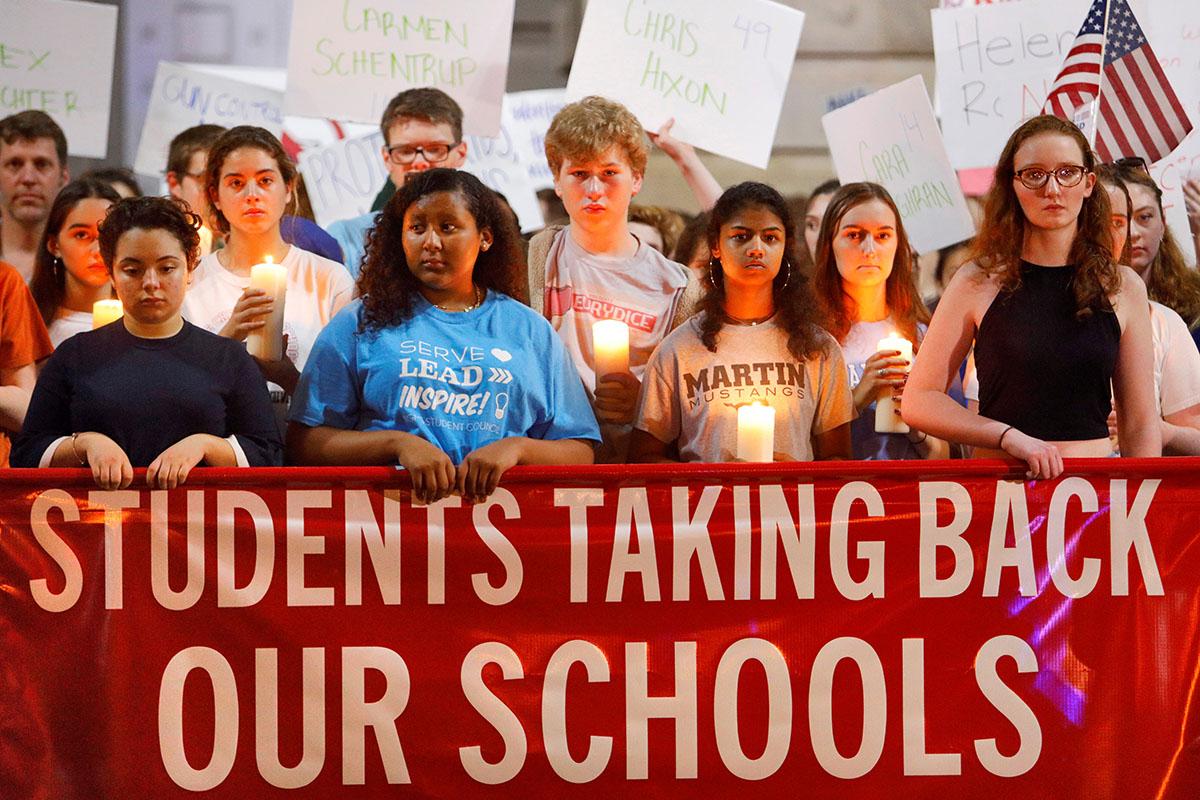 This weekend we move into “Stage 5″ of Trump’s takedown of the “Deep State” actors, according to a military insider a.k.a. the “Alliance.” What that entails is varied, but what is evident….the “Deep State” have created a diversion by busing in students from around the country to literally break into the gates of the White House over their attempt(s) to force new and aggressive gun control measures.

Promoters of the 2nd Amendment are reported to be rapidly organizing protests at several major cities and if a paid provocateur creates an incident with these so-called “innocent” Social Justice Warriors, the 2nd Amendment will end-up on the chopping block for sure.
http://dauntlessdialogue.com/

These students are shills for the Democrat Party in their bid to take-back the House in November since 99% of these students will be 18 upon graduation this year and WILL vote.

All of this comes at a time when rogue FBI agents will face their demise soon while the Mueller investigation is falling apart fast.

The “Deep State” are using the two bimbos as a diversion in-order to create further chaos within the Trump family in hopes that supporters and those involved with the take-down of the “Deep State” traitors might waiver. The situation is so serious, most do not realize there have been 7 attempts on Trump’s life and Secret Service are not relied on as the only source for Trump’s protection, having to rely on BlackWater and Navy Seals instead.

Most of these “Deep State” actors facing charges of Treason and War Crimes (Bush et al) goes back to the 9/11 black ops by the Bush Administration to allow public support for the fake wars in the Middle East for control of the oil reserves, trans-pipelines, puppet dictatorships, and the icing-on-the-cake…..the take-down of the United States by imposing a strict “Police State” that mimics KGB style Soviet Union era tactics under the “Patriot Act” written and ready before 9/11.

Regardless that President Trump is in office, and even though the Liberty Movement thought our concerns would be ratified and #MAGA would become the norm, however, we quickly learned that our government operates on three levels. The “Shadow Government” (Military Industrial Complex and global illuminati control via the Council on Foreign Relations), the “Deep State” bureaucratic actors selectively placed by Bush and Obama, and WE THE PEOPLE now in a battle with a domestic enemy.

If Trump does not prevail and Stage 5 fails, we as country will quickly slip back to where we were on 9/11 and the Socialist / Communist Left will advance us into a Soviet Union era type of government. Our economy will be 100% debt based where there is basically no Middle Class and restrictions on travel and/or leaving the country will be nearly impossible for low-income people and only the Clinton types will be free. Pretty much the same scenario we see in Mexico and the reason why the poor have to illegally cross into the United States and cannot get approved for legal entry, which begins in Mexico.

Most Mexicans and Central American illegal aliens are restricted because of petty and felony type crimes, diseases and no property ownership. China is also a prime example of what America could become if Trump fails with a United Nations Agenda 21 on steroids.

Now….throw-in a Democrat controlled House and Trump impeached or God forbid other, a full-blown gun registration of every weapon you own as a result of a Democrat insurance requirement for all gun owners, and millions of gun owners that refuse to acquire the insurance with millions that already have CCW Carry Permits refusing insurance, the stage is then set for marking every gun owner refusing insurance a felony criminal in possession of illegal weapons. Police vehicle tag readers will and do see on their computer screen if you carry a concealed weapon.

Criminalizing society by the Communists will also advance to mandatory vaccine checkpoints when the next false flag biological agent is released on the public. No vaccine(s)??? No passage between states, or in entry into selected buildings, businesses and sports events. Buying food could easily require a vaccination certificate.

Home schooling will be illegal and that will be based-on negative political influence by parents (that own guns or do not vaccinate their kids).

Under a Communist Left government that can easily surpass the Trump presidency in 7 years or less, the right to move about the country will be restricted to the amount of credits you have on your Vehicle Emissions Credit Card. Al Gore et al will surface again like a gopher waiting for Spring. The poor will be unable to travel privately and Greyhound bus lines will emerge as the main source for travel (as long as your vaccine card is up to date).

And of course, the Communist Left Democrats will continue to reign-in votes from the down trodden because they will use the fakestream media to expose the wealthy as privileged and the poor as being restricted ! “Your situation is a result of Whites that have more money than you !” They create the problem and then offer the solution……

The poor Whites will hate the wealthy Whites and Democrats will attempt to stay in power….in-fact, we are seeing that now!

The Democrat Party are nothing but liars by “Deep State” actors….mostly Democrats that want to maintain power. THEY can twist a sweet orange into a lemon and their followers cannot see past their disgust for President Trump. THEY are willing to submit their heart and souls to tyranny while overlooking the criminal actions by those having control of the justice system.

Liberalism is a mental illness by most in the Liberal / Socialist movement that want to take your freedoms because they feel those freedoms are hurting them.

“Hell no”…..give qualified teachers a weapon to defend themselves and their class?? But instead….gun control and then more gun control because gun control initiatives (now) will make no difference when a sub-human wants to go on a killing spree.

IT’S NOT ABOUT SAVING LIVES….it’s about Communist control of America without the threat of the 2nd Amendment.

THEY KNOW….what it says in the 2nd Amendment about the RIGHT to change a government that has turned on the people !

THEREFORE….it is the mission by these organized students, funded by the Communists, to incrementally destroy the 2nd Amendment by restricting effective weapons against tyranny, initiate insurance requirements followed by the criminalization of all gun owners if they don’t submit, and effectively control 90% of gun ownership in AmeriKa.

In the meanwhile, the Pharmaceutical Industrial Complex is working behind the scenes to trap as many humans they can with drugs for symptoms that were non-existent years back, but now surfacing as a result of propaganda and feel good drugs…..the result? No weapons for you !!

Legalized Marijuana in all states will be the catch-all for not being able to own a weapon, even though Marijuana has proven to be the number one opiate drug addiction solution.

Keeping most Americans poor, drugged-up, and vaccinated is OUR future if we allow this latest attempt by the “Deep State” to organize millions of students as new voters indoctrinated by total bullshit by the Communist Left. We are there….

Throw-in Stage 5 take-down by the Trump Administration, we could witness all the ingredients for chaos beyond control in coming days.

And…..as a review of how we got here, listen to this very accurate assessment of what is believed to be extraordinary evidence of what happened on the morning of 9/11 and you will get an idea of how 9/11 was planned for what we are seeing today.

Pay close attention as to clear evidence of where the passengers and the original 9/11 flights were flown to out of Boston to (Westover AFB) and then replaced by drone controlled B-757′s and 767′s and who was behind that technology at the time.

The key factors that blows the “official 9/11 story” out of the water are the cellphone calls that have NO BACKGROUND sound of flying in a jet, let alone no possible way contact can be made above 3,000 ft, obvious scripted statements, and the time line contradiction.

The passengers and crew were set-up as part of the massive military exercise that was underway that morning and participated as true patriots but exterminated accordingly by the “Shadow Government” and presented to the world by the “Deep State” as a real attack by Muslims, which at least six are still alive today. I agree with this flight attendant on nearly 100% of her research into 9/11.

Traitors and war crimes and the murder of over 3,000 people on 9/11? President Trump MUST prevail or we will find ourselves in a bloody war in AmeriKa if the Communists take-back this country. Obama has already taken-off to New Zealand to purchase property and Hillary Clinton soon enough will follow in May. What are the odds their visit to New Zealand (only a couple months apart) is for the reasons fakestream media is telling us? “Golfing and book tour?”

Right?? A Trump’s “Stage 5″ operation by the U.S. military is wishful thinking?? If so….we will be in serious trouble, as a country, if a Communist take-over happens this November…and that’s NOT fake news.