BOMBOGENESIS: Here We Go Again With Another Bomb Cyclone 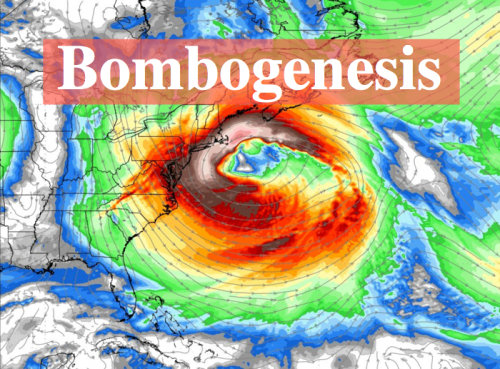 BOMBOGENESIS: Here We Go Again With Another Bomb Cyclone

An already potent storm will track off the Atlantic coast and become a bomb cyclone that is likely to cause high winds, coastal flooding and heavy wet snow in the northeastern United States centered on Friday.

Part of the same storm already caused significant flooding and produced severe thunderstorms over the South Central states and will bring a change to heavy wet snow and strong winds to the lower Great Lakes region on Thursday night.

For this winter, this storm may be second only in intensity to the storm from early January in the same region. As the barometric pressure plummets, winds will increase dramatically.

The most far-reaching effect of the storm will be high winds. Gusts of 50-60 mph will be common from the central and southern Appalachians to the lower Great Lakes and part of northern New England. However, gusts approaching hurricane force are likely along the coast from Delmarva to eastern Massachusetts. The strongest winds are likely to be along the coast of eastern Massachusetts.

Extensive power outages are likely spanning Friday to Saturday. Have a working flashlight on hand, and keep cell phones charged.

Winds as strong as predicted can knock down trees, cause damage property and make loose objects into projectiles. Walking, standing or driving through areas where there is a canopy of trees may be very dangerous during the storm.

Major airline delays and flight cancellations are likely due to the wind alone from Chicago and Detroit to Washington, D.C., Baltimore, Philadelphia, New York City and Boston. Wind-related delays are possible as far south as Charlotte, North Carolina, and Atlanta.

Airlines were waiving change fees ahead of the storm, according to the USA Today.

Most of the problems from the storm in Washington, D.C., and Baltimore will be due to the wind and not so much from rain and any brief period of snow at the end.

Coastal inundation may behave like a tropical storm or hurricane

Depending on the wind direction, ocean and/or bay waters will be pushed inland, and substantial coastal flooding and beach erosion are anticipated. As the storm moves along and the wind shifts, areas that were not flooded initially may take on water.

The worse conditions are likely in eastern Massachusetts, where officials have already asked coastal residents to evacuate, according to Mass Live.

On Thursday, Massachusetts Gov. Charlie Baker announced that he was activating the state’s National Guard to assist residents who may be impacted by the storm.

@MassGovernor Charlie Baker has activated the MA National Guard. We will be working with @MassEMA and other local, state and federal authorities to assist in rescue and recovery operations as needed.

Offshore waves of 30 feet are forecast. All vessels are encouraged to remain in port. Large vessels should remain at sea until the storm moves away later this weekend.

Lake shore flooding is likely along the southern shorelines of lakes Erie, Ontario and Michigan.

Storm to produce flooding rainfall in some communities

Rain will fall in most areas during the first part of the storm. As the storm strengthens, rainfall rates will increase along with the wind.

Rain may be so intense that it leads to widespread urban and small stream flooding from part of eastern Pennsylvania and central New Jersey on to the northeastern to eastern Massachusetts. Rainfall in part of this area may range between 3 and 5 inches from the storm, with the heaviest rainfall likely during the day Friday.

RELATED:
What is bombogenesis?
How to survive a power outage in winter
Preparing for the costliest weather disaster in the US: How to stay safe before, during and after a flood
Shoveling snow increases risk for winter heart attacks, experts say
Do weather-related flight delays really save lives?

Significant travel disruptions on area roads are likely from New York City to Boston as a result.

Pockets of urban and small stream flooding may occur farther west to the Appalachians. However, a change to heavy wet snow or a sweep of dry air at the height of the storm may mitigate these problems.

Heavy wet snow to pile up in a hurry

A change to heavy, wet snow is in store for many areas as the storm progresses. Some motorists may get stranded on the highways in this storm.

The changeover to snow will progress from the lower Great Lakes into Thursday evening to the higher elevations of the Appalachians Friday morning and then to coastal areas from the upper mid-Atlantic to New England Friday afternoon.

The heaviest snow is forecast over much of western, central and southeastern New York state with the likelihood of at least a few inches of snow around New York City. However, it’s possible that much heavier snow falls in New York City to perhaps as far south as Philadelphia. A matter of a couple of degrees Fahrenheit may make a difference.

How quickly cold air is drawn into the storm near the end will determine how far south snow falls in the mid-Atlantic and in southeastern New England.

In lieu of high winds, the snow will be heavy and wet enough to weigh down trees and power lines. The weight of the snow, whether it be a few inches to 18 inches will be difficult to shovel and plow.

The storm will end from west to east during Friday and Friday night. However, strong winds will continue through Saturday in some communities.

Blustery and cold conditions are likely to linger along much of the Atlantic Seaboard into Sunday.