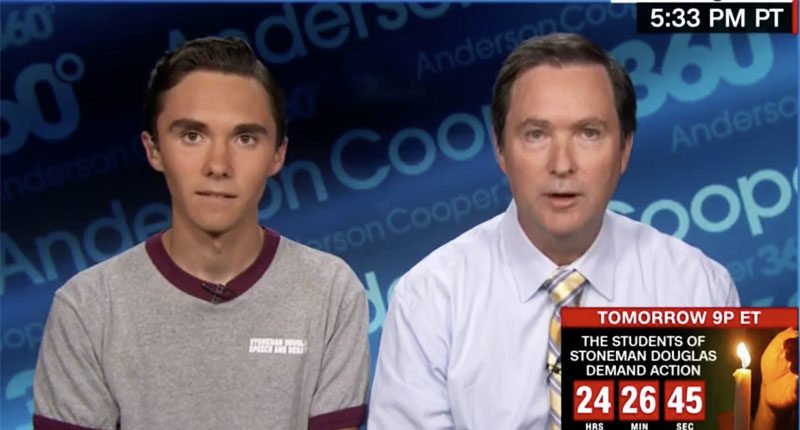 How does a trained crisis actor from Hollywood show up at Stoneman
Douglas HS, after attending a California High School, and lead a new
student gun control movement that has already changed the laws in
Florida?[1]

SOTN Editor’s Note: Florida Governor Rick Scott has already — UNILATERALLY — changed the gun laws in Florida after these folks showed up on the steps of the capitol building. (See photos here: LIBERAL HYSTERIA: Gun Control Protest in Tallahassee Florida in Response to the Parkland Mass Shooting)

But how did this really happen?  What follows is just one small piece of this Deep State puzzle being put together by the seditious U.S. Intelligence Community.  Let’s call Phase I of this op—Operation Hogg Wash.

There are actually many pieces to this CIA-coordinated black operation to foist new firearm restrictions on Floridians.  Operation Hogg Wash represents a crucial shift in the cabal’s strategy to use school children to carry out their nefarious New World Order agenda.

KEY POINT: Florida is world-renowned for having the highest concentration of wealth in the world that stretches along the Gold Coast, from Stuart to the Keys.  Domiciled in this same region is the greatest number of Illuminati families on the planet.  The Marjory Stoneman Douglas High School is located right in the heart of this highly protected area—Broward County, Florida.  The power elite don’t want to be threatened by gunowners when things start to fall apart, as they surely will.

Then Hogg appeared on various MSM news broadcasts presenting himself as a de facto leader of a new student gun control movement.  All the while, Hogg is forced to defend himself from accusations of being a George Soros stooge. MSM Crisis Actor David Hogg Now Spending More Time Defending His Soros-funded Gig

David Hogg has also been compelled by investigators to answer questions about his father’s previous job with the FBI, as well as his own ties to another Soros-funded, Podesta-led NGO.  SHOCKER: CNN’s high school star David Hogg, whose father is ex FBI, is also tied to John Podesta’s Center for American Progress

These several TV appearances only took place after Hogg got his scripted lines down pat. Deep State agent David Hogg forgets his Lines, Coached by handlers before he goes prime time No matter how you look at it, this kid is a real piece of work!  Some might say he’s full of:

However, we would caution those who are justifiably irreverent that this “Hogg Wash” was ‘strong enough’ to influence the Florida governor.  How could that possibly happen… … … except by purposeful design?

After all, David Hogg et al. were majorly responsible for helping to galvanize a student gun-grabbing movement that ended up in Tallahassee, right on the steps of the state capital.

Not only did that student movement rapidly gather steam and end up in droves at the capitol building, the state legislature found itself defending their votes on new gun legislation.

By the way, this kid from one of the most notorious CIA-overseen LA “Canyons” — David Hogg — also helped lead a money-raising campaign that has already fleeced donors of $3.5 million. They can’t spell, but they raised $3.5mil. What a Deep State operation Stoneman Douglas is!

This clearly indicates that Hogg has been programmed in much the same manner as Mark Zuckerberg, Elon Musk, Jeff Bezos, Travis Kalanik, Evan Spiegel, the Google brothers, Eric Schmidt, Bill Gates, etc.  Hence, with Deep State behind him, it appears that Daivd Hogg can’t lose in the short term.  Which will translate to our loss if we don’t expose this entire CIA-directed, FBI-protected false flag black operation post-haste.

KEY POINT: Soros & Company knew that the adults could not get the job done, so they enlisted the help of teenage graduates from the CIA’s MKUltra Mind Control Program.  And do you know that it worked…at least this time around it did.  A Florida RED STATE governor would never have acted so quickly unless somehow forced to do so. BREAKING! Gov. Scott Goes for Gun Controls in Florida, Gunowners Feel Betrayed

On the surface this does not look like good news at all, particularly in view of the Florida governor caving in so quickly.  However, there is a much more significant outcome—the instantaneous explosion of the HOGGgate scandal.  For the very reasons that David Hogg the crisis actor was chosen to be the star of the show (as well as the ongoing psyop series), he projects as the quintessential MKUtra mind-controlled puppet.  Kind of like the kid in school who everybody hates because he says exactly what the teacher wants to hear (a real brown-nose).

As a result, this latest battle in a deep blue Florida county has already become an extraordinarily damaging Pyrrhic victory for Deep State.  Never has a single false flag operation exposed so much about the inner workings of these government-sponsored terrorist attacks.  Thanks to David Hogg the coup plotters have been caught with their pants down like never before.

For example, and this is really HUGE: When you Google “David Hogg”, the search results returns the following page.  Three of the top 6 items on the first Google page show the derogatory term ‘Crisis Actor’.  That the MSM feels obligated to even address this emerging “crisis actor” reality, above the state-sponsored terrorist attack itself, is such a truly historic development.  It’s actually hard to believe that it’s happening—in real time. Defending himself on national TV is the last thing David Hogg ever thought he’d be doing once he got his 15 minutes of fame—worldwide.

Whether the cabal decision-makers screwed up inadvertently or did so on purpose, their treasonous MO has been revealed for all to see.  While Deep State may have gained some gun regulation in Florida, they have forever lost their capacity to successfully conduct false flag terror operations!

Special Note: The truth be told, this burgeoning scandal is much bigger than just HOGGgate.  The most recent disclosures about the unprecedented failures of Broward County sheriffs and other law enforcement officers are as grave as they are shocking.  First there was this admission of gross negligence and/or outright collusion: Who told the sheriff deputy to stand down during the February 14th Florida shooting?  As if that wasn’t bad enough, today’s headline reads: Four Broward County Law Enforcement Officers ‘Waited Outside Douglas High During School Shooting’  These and many other unparalleled developments prove that the Stoneman Douglas High School in Broward County was the deliberately selected venue to stage this false flag shooting Why?  Bcause all the key personnel had been previously put into place.  Not only for the implementation of Operation Hogg Wash, but also for the continuing cover-up.

Operation Hogg Wash represents the Deep State’s Democrat-run conspiracy to take down the American Republic.  The uber-liberals (who are really cultural marxists) are always used to wreck and ruin a nation from within.  This is how communism always works in advance of staging a full-blown revolution.  This is also why there is such a push to take away the guns from every U.S. citizen.  Were the Right to be rendered defenseless, a civil war would end before it began.  As a result, we’re now seeing reckless scandals like HOGGgate, as their desperate attempts to repeal the 2nd Amendment gain some traction.

The Republican side of this ongoing conspiracy has been primarily concerned with destroying America’s image abroad… by destroying the rest of the world.  That’s why so many RINOS are hardcore warmongers.  The RINOs are also the biggest beneficiaries of the Military-Industrial Complex for this same reason.  Their nonstop war-making guarantees HUGE profits from all of the undeclared and unprovoked wars of naked aggression (e.g. the engineered Syrian War).

There will undoubtedly be other blatant psyops on the order of Operation Hogg Wash.  Now that the HOGGgate scandal has exposed the globalist’s signature MO via Operation Hogg Wash, is there any crazy scheme TPTB won’t try to pull off? The patriot movement has done an outstanding job by revealing the incriminating details of so many false flag attacks perpetrated under the rubric of Operation Gladio C.[2]  This is still the single best initiative that can be taken at this time to terminate the current coup d’état.  Only when a critical mass of patriots have been sufficiently awakened, will the country will be liberated from these NWO tyrants once and for all.

UPDATE: William Cooper warned about the globalist cabal making a very serious move into the New World Order by staging a future school shooting as follows.  It’s important to point out that this prophetic warning was issued right after the 1999 Columbine High School massacre as follows:

“Watch for the rose presented at a future
school shooting, it is then that the NWO
will make its move”.

[1] Did David Hogg really graduate from high school in California?