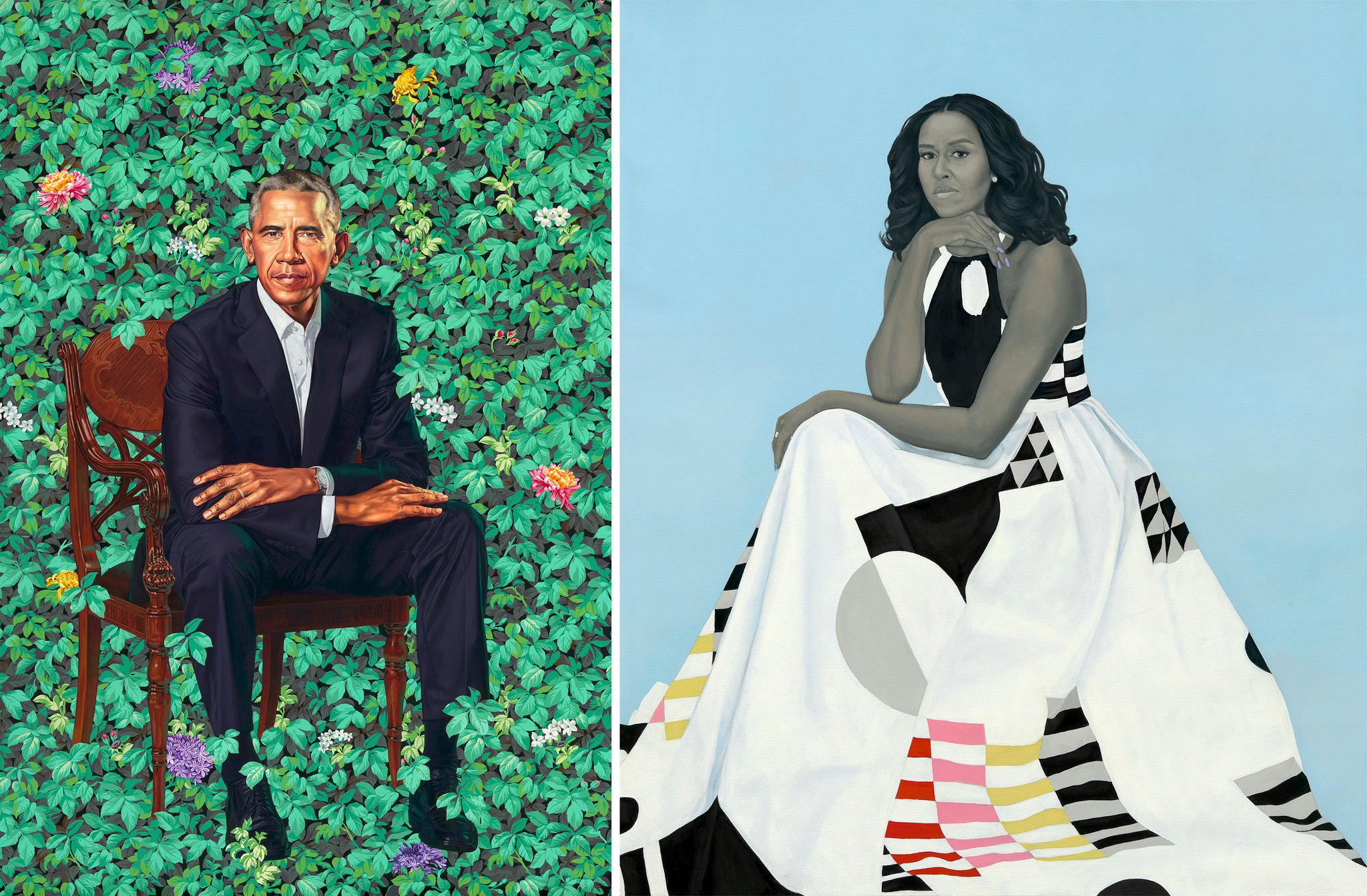 The Obama Official Portraits: When art imitates life and truth is stranger than fiction

“Kehinde Wiley is the “First Black Gay Artist” to be commissioned to paint a presidential portrait for the Smithsonian”     — thegrio.com

First of all, why did Obama choose an artist who  likes to paint black women beheading white women?

What follows are two paintings produced by the painter who Obama chose to paint his official portrait —  Kehinde Wiley — which will hang in the  Smithsonian National  Portrait  Gallery. 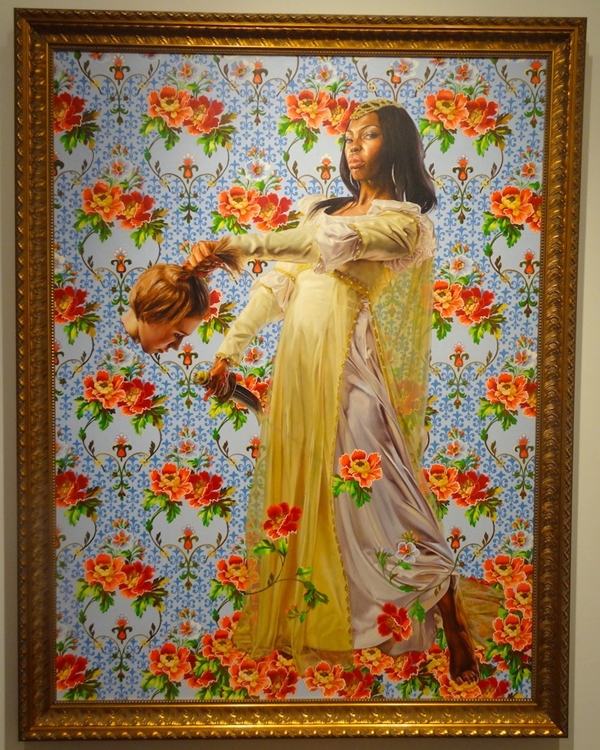 Now here’s an enlargement of the beheading. 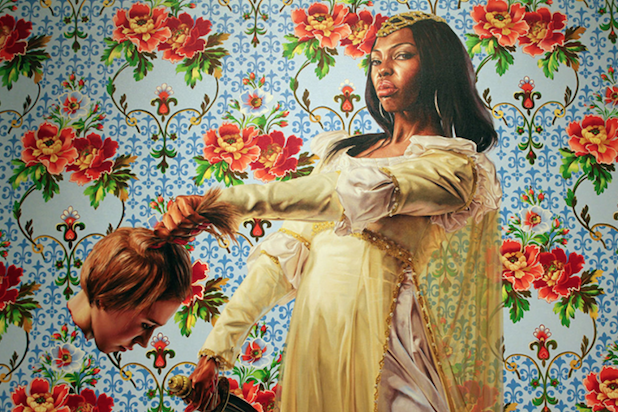 One can’t help but wonder who the white woman was who posed during the painting session—twice. 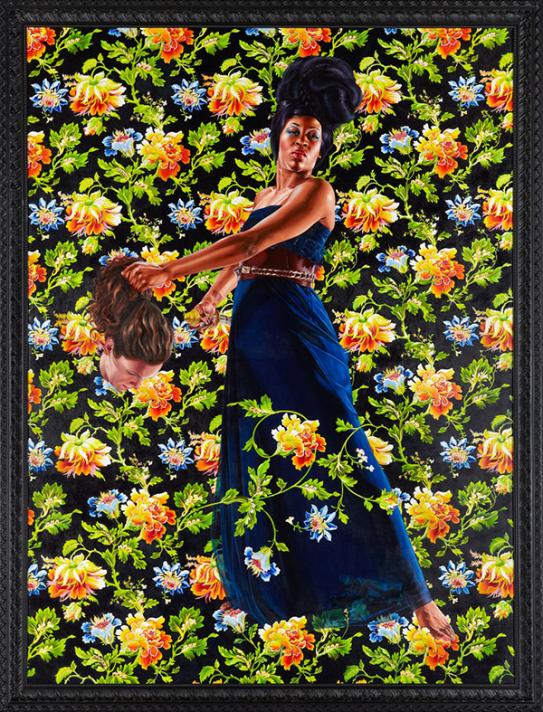 See what appears to be blood on the knife in the painting enlargement below. 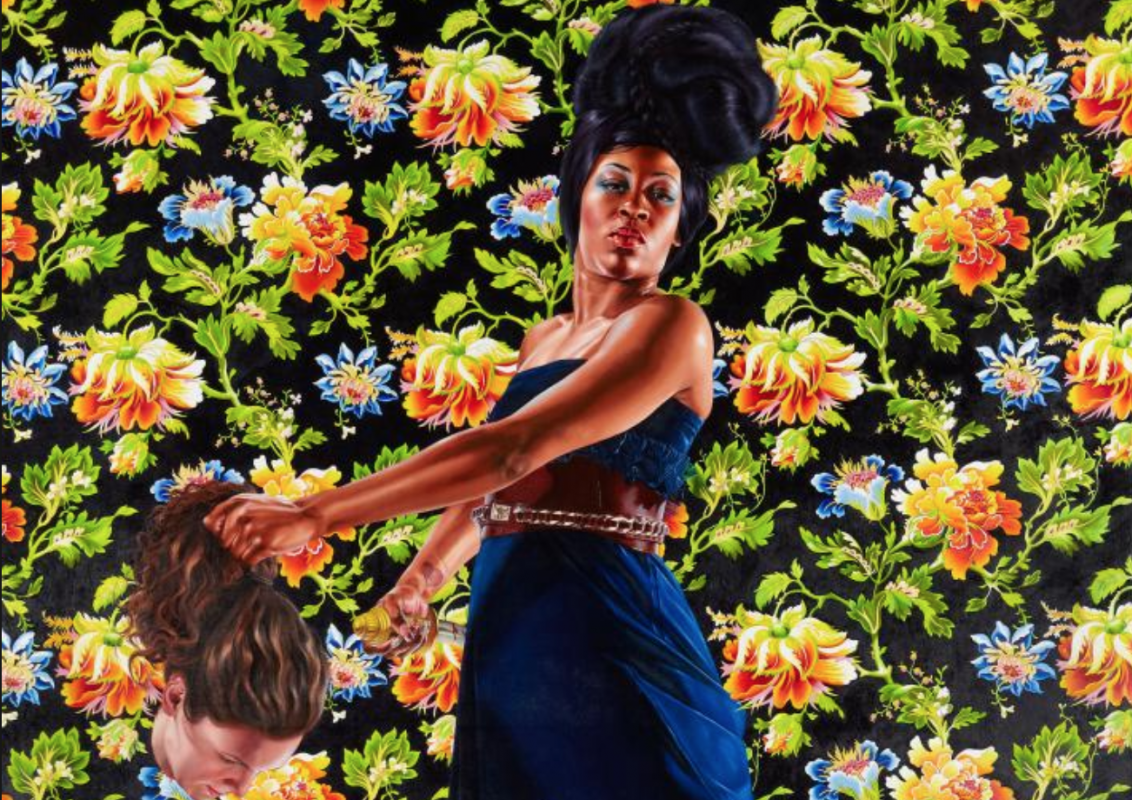 Next we see a self-portrait of Kehinde Wiley on horseback while aggressively wielding a sword. 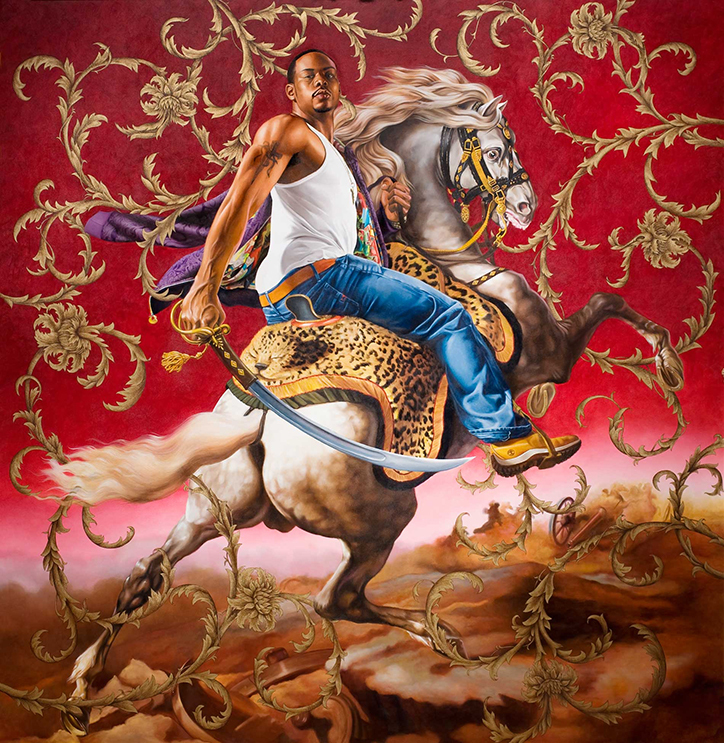 Here’s another dramatic self-portrait in the same vein side-by-side with a photo of the painter. 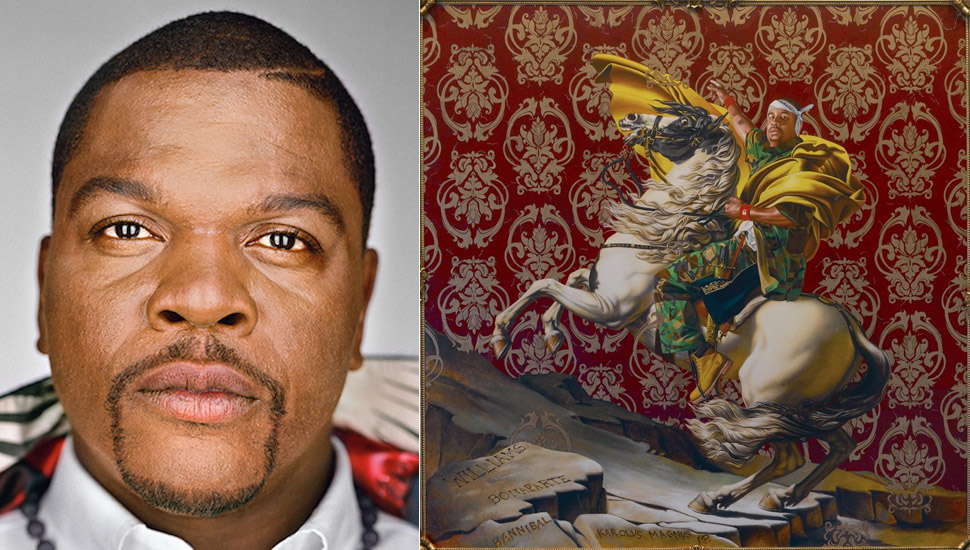 The obvious question here is: What’s with all the swords and revolutionary fervor?  But, especially, why does Obama’s ‘artist’ have such a strong  interest in painting black women beheading white women? 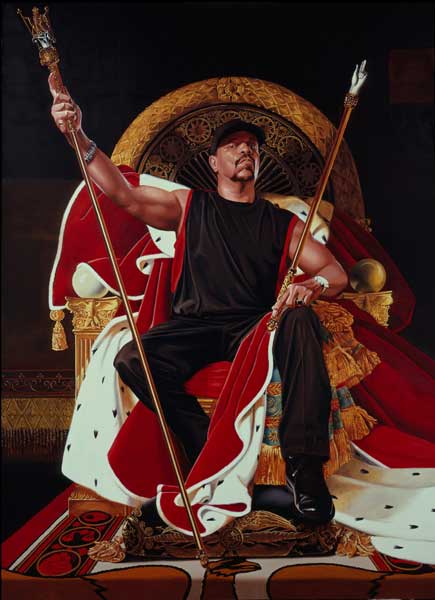 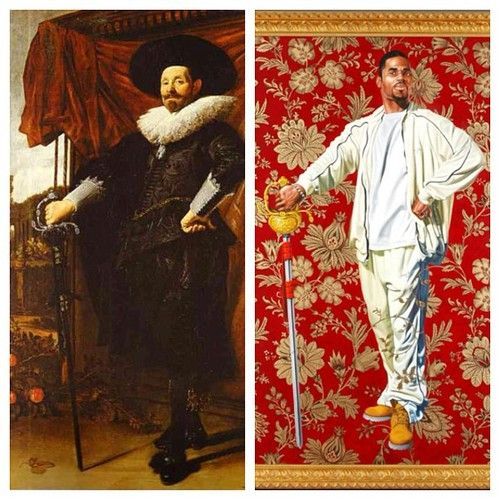 Lastly, it appears that  Kehinde Wiley may very well be Obama’s appointed iconographer for his Soros-funded Purple Revolution.[1]  (See purple cravat below) 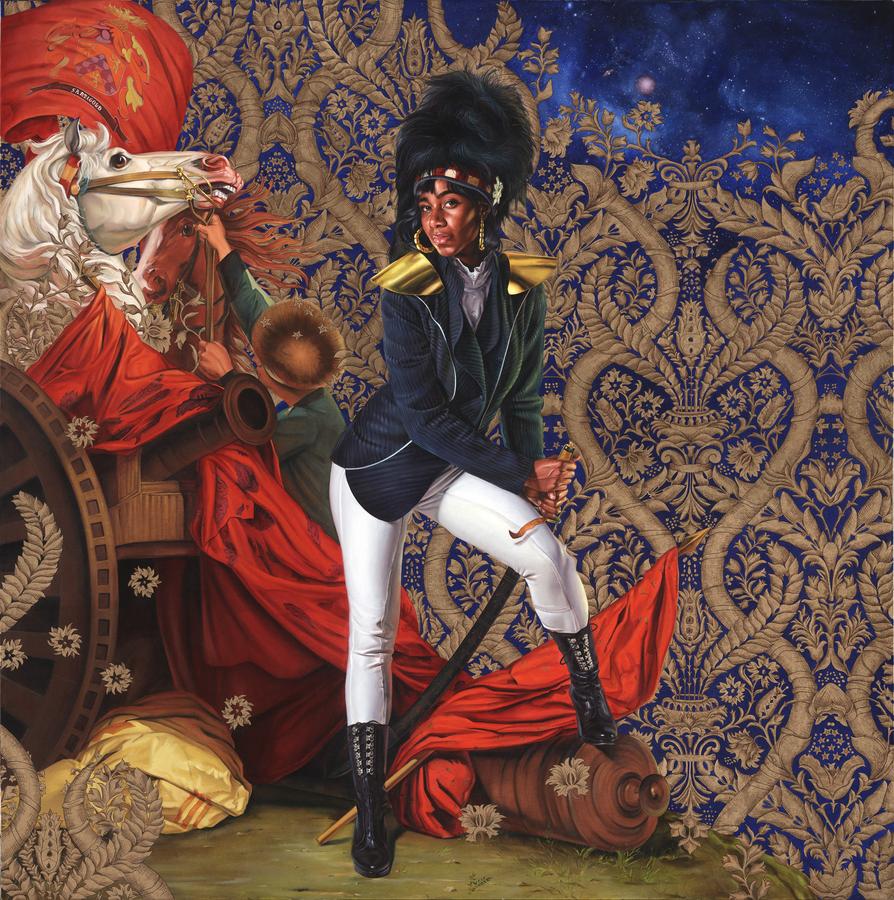 There is another concerning issue with previous works of Kehinde Wiley which has even been raised by FOX News’ Sean Hannity.  Why does he inconspicuously incorporate sperm into his paintings?  Not only does his Napoleon piece  have this extremely odd element (click on photo below to enlarge), so does Obama’s official portrait.  See:  Why does the painter of Obama’s official portrait use sperm in his paintings? 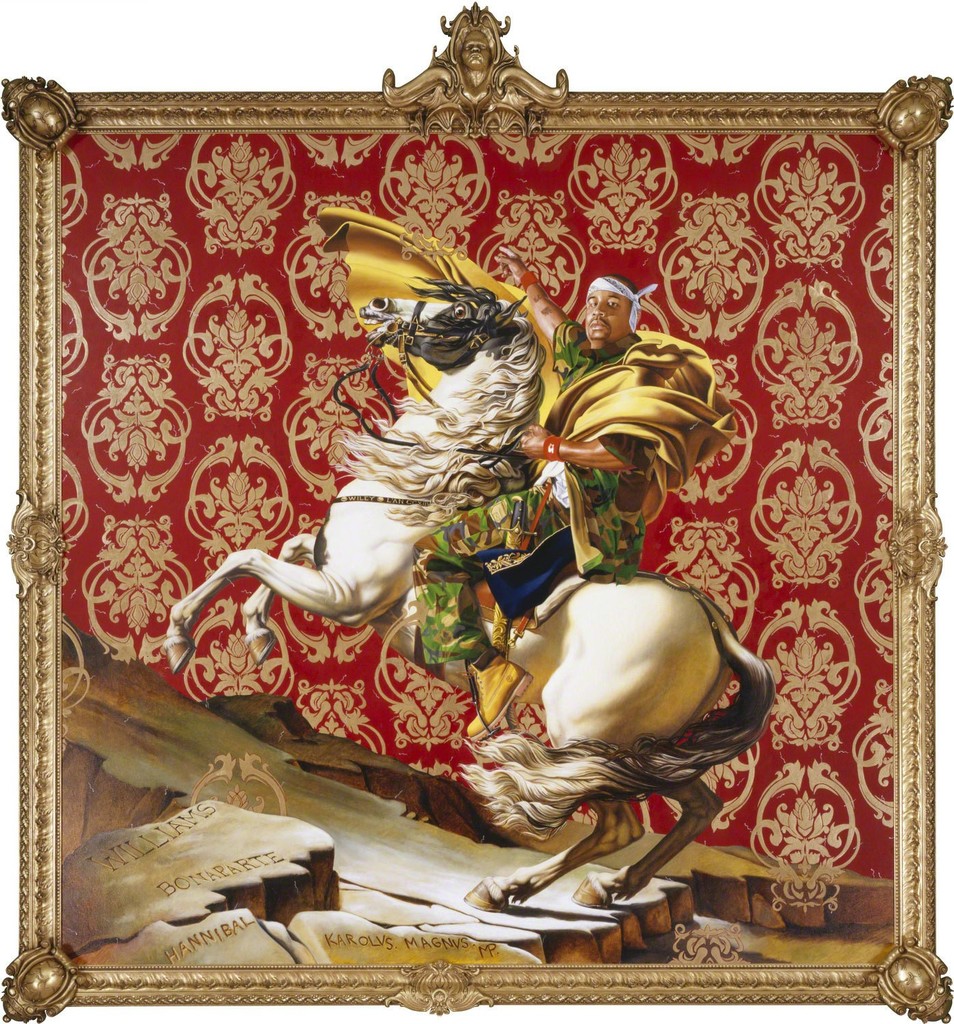 One last review of Obama’s portrait uncovered two more peculiarities (Open up the browser window to expand the painting). Why does his left hand show a sixth finger tucked underneath?  The size of Obama’s pinky on his right hand confirms that the artist got the left hand anatomy all wrong—Why?  Finally, why is there an erect penis painted into the coat sleeve of Obama’s left arm starting at the shirt sleeve and ending at his elbow? 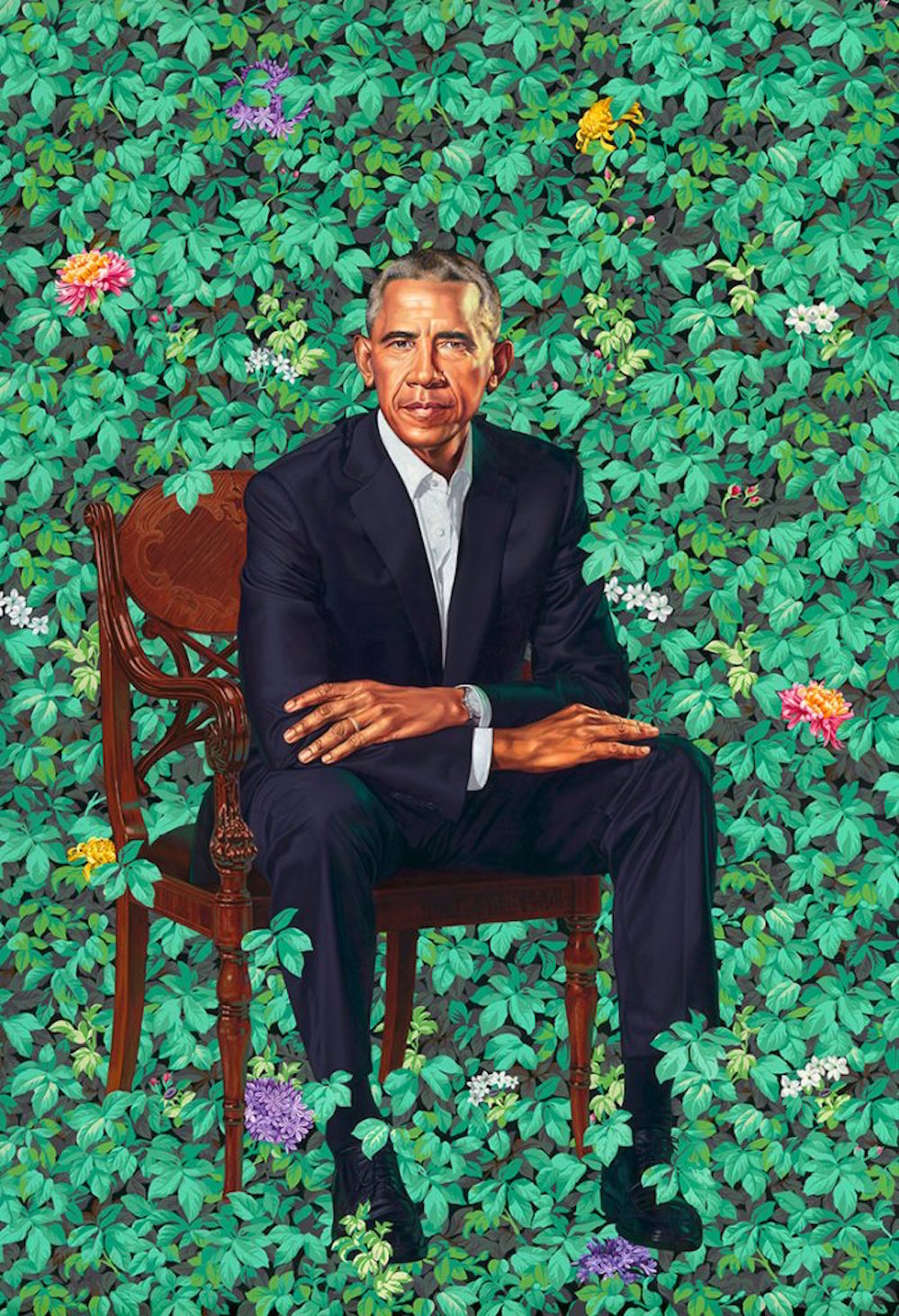 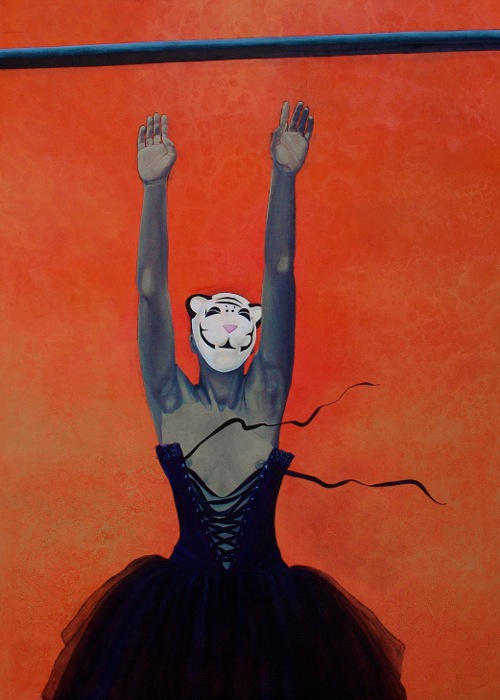 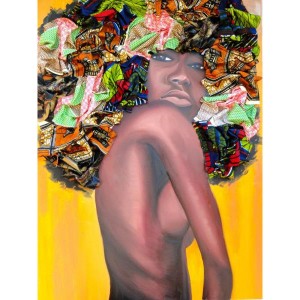 Of course, the most important question about Michelle’s official portrait is: Why does the painting bear such little resemblance to her?    Regardless  of who really sat for the painting session, Michelle’s likeness can be easily spotted  by the broad BARE shoulders and large arms.  She was the first FLOTUS in American history to immodestly bare her shoulders at official functions for 8 straight years. 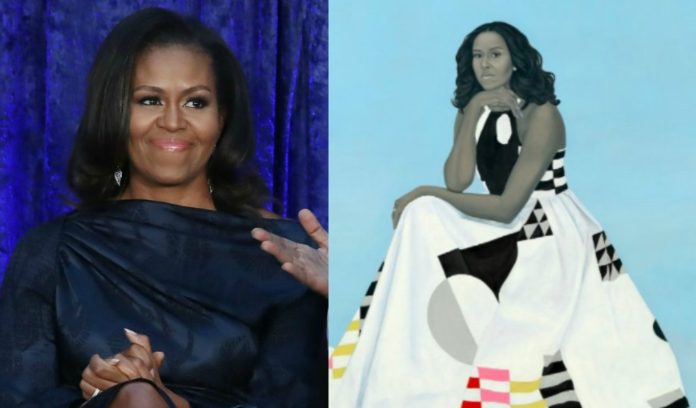 The Millennium Report sincerely apologizes if we have offended anyone with this graphic yet very telling post.  However, we felt that this quite bizarre episode of the Obama’s continuing post-White House drama ought to be brought to light.

After all, truth is much stranger than fiction these days; just as art often imitates life…especially one’s carefully hidden life.

KEY POINT:   Given Obama’s   choice of a trenchant artist provocateur, who is a stone-cold  purple revolutionary, it’s clear that Soros has given him marching orders to re-inflame the race  war that he instigated as POTUS. [2]  Why else would  his official portrait artist paint angry black women cutting off the heads of white women?!

Do you get it yet?  Obama doesn’t even care anymore if the whole world knows that ISIS was the creation of his administration.  Not only that, he’s now flaunting it.

His various masters throughout the U.S. Intelligence Community now feel confident they have gotten away with that “Crime of the Millennium” perpetrated against both Syria and Iraq.  The Islamic State  was actually set up by the Obama-Clinton puppet regime to inflict wholesale destruction on large swaths of the Northern Levant, to genocide hundreds of thousands of innocents, and to force millions into a mass exodus away from their ancestral lands.

The real crazy thing about the entire war crime spree (i.e. Arab Spring, Tunisian Civil War, Libyan War, Syrian War, Yemen War, etc.) is that Obama probably didn’t even know why he was ordered to carry it out (See:  Greater Israel Project), particularly after receiving the  undeserved Nobel Peace Prize.   That’s because a close look at his portrait above does reveal  Project MKUltra Monarch programming at work (compliments of the C.I.A.).  Now that’s a real “dirty little secret”!

Everything Obama does has explicit purpose.  More accurately, he is not allowed to make a single independent move  by his C.I.A. handlers.   Hence, he would never be permitted to unilaterally commission an artist whereby comparisons to ISIS beheadings and Daesh sword wielding could be made so easily.  Therefore, it must be that this extremely sordid “official portrait” event is yet another psyop perpetrated against the American Republic.  Obama always styled himself as a “Saul Alinsky” revolutionary (he divided the body politic like no other POTUS in history), and the painter himself personifies this subversive fanaticism.    There are also strong elements of Napoleonic  despotism  in several of his paintings which perfectly mirror  Obama’s reign as America’s first Monarch. 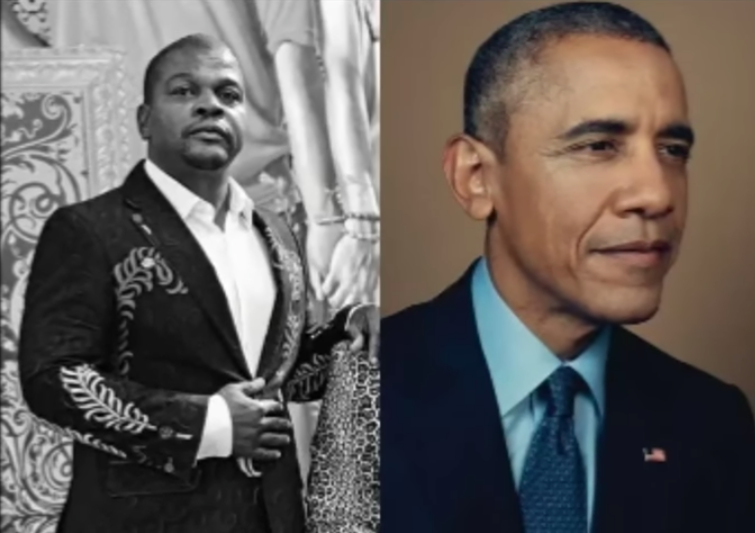