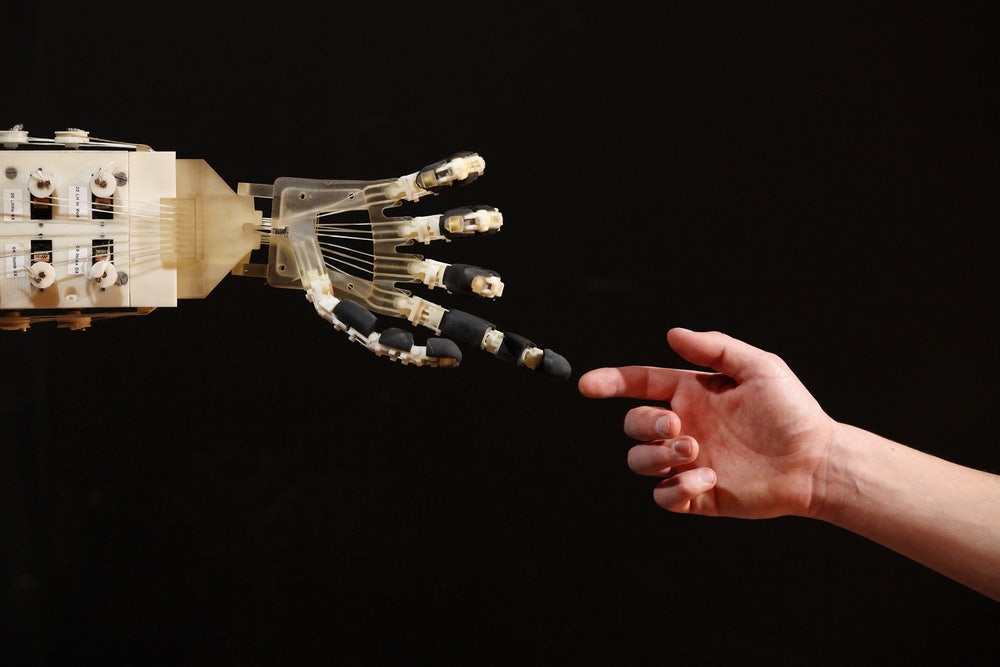 The engineer Anthony Levandowski has reportedly founded a religion led by bots, the latest manifestation of the tech world’s spiritual underpinnings.

By SARAH JONES
The New Republic

The bots, our children, do not behave. They have taken over the internet—bots account for more than half of internet traffic—and interfered with our elections. But instead of being unnerved by the bot’s growing power, Anthony Levandowski would like to make one God. The Silicon Valley engineer, who has been accused by Waymo, Google’s self-driving car company, of trying to steal trade secrets and give them to Uber, in 2015 “founded a religious organization called Way of the Future,” Wiredreported last week. “Its purpose, according to previously unreported state filings, is nothing less than to ‘develop and promote the realization of a Godhead based on Artificial Intelligence.’”

Nobody but Levandowski knows if he really believes he can create a Godbot. Considering his obsession with artificial intelligence, it is altogether possible that he does. And while that may seem nuts, people have started religions for stranger reasons. The Way of the Future could be an elaborate tax scam and this still would not necessarily invalidate its claims to be a religion; people sincerely believe in Scientology, after all. Further, Levandowski’s belief isn’t so strange within the context of Silicon Valley, which has long invested religious hopes in its creations.

But no matter how far the tech industry advances, its genius minds can’t exorcise their humanity. The belief that we could one day evolve into a new, technologically enhanced species; Peter Thiel’s rumored lust for young blood, which would supposedly help him live forever; cryogenic resurrection—they thinly disguise the same fear of death and desire for salvation that propel religions the world over. In this respect, a divine bot seems less like science fiction and more like an inevitable development, proof of what Samuel Loncar has called “a vibrant religious culture” in the Valley.

“At the beginning, bots were simply chatbots,” Kemal El Moujahid, a Facebook engineer, explained in Techcrunch. These primitive beings could do little more than respond to our prompts with pre-programmed texts. In an act of theistic evolution, we have encouraged them to grow and become more sophisticated. There are now good bots, which do things like scan the internet for copyright violations, and bad bots, which can launch basic direct denial of service attacks and spread politicized misinformation on platforms like Twitter.

Some have names. In Denver, they can also help you buy a house. Register for Envision, and you will have two at your disposal: “‘Dante’ hunts for other listings that closely map to the selected style the user first chose, while ‘Eden’ offers a more expansive set of options, including properties with related or similar styles,” reports Inman, a real estate industry news site.

Some have bodies, and, like humans, they find that those bodies are susceptible to abuse. At the Arts Electronica Festival in Austria in September, men reportedly so soiled a sex robot named Samantha that her creator must now take her for repairs. The men broke two of her fingers, reports BBC Three, and “mounted” her breasts. “People can be bad,” Sergi Santos, her developer, told the BBC. “Because they did not understand the technology and did not have to pay for it, they treated the doll like barbarians.”

For now, bots belong to an evolutionary process we can control. And we exercise that control when they become too frisky. Months after Facebook’s El Moujahid extolled the virtues of “an automated army of messengers,” two Facebook bots began speaking in tongues. “i i can i i i everything else,” said Bob the bot; “balls have a ball to me to me to me to me to me to me to me,” replied his botfriend Alice. Facebook shut down this program, though not, as was initially reported, because the results frightened their engineers. They didn’t achieve the desired results: Alice spoke of balls because engineers wanted her to barter with Bob for balls, making their chats a simple negotiation. Still, this doesn’t reduce the sense of creeping horror. We made an intelligence, and in a limited way it learned to speak for itself.

The god in all these scenarios is the human architect, not the bot under her control. But the Valley’s mightiest titans grasp their own innate limitations, and see salvation in their creations. If Thiel seeks young blood, it’s because he knows he’s going to die. The acolytes of Ray Kurzweil—the academic who helped popularized the Singularity, the idea that artificial intelligence will eclipse human intelligence and ultimately make it irrelevant—are itching to become one with a higher entity. And if Levandowski wants to make a Godbot, it’s because it theoretically possess a quality that he lacks: permanence, or something like it.

“Science is like religion, an effort at transcendance that ends by accepting a world that is beyond understanding,” John Gray writes in The Immortalization Commission. “Just like faith, reason must at last submit; the final end of science is the revelation of the absurd.” The chief hypocrisy of evangelical atheism is its reluctance to recognize the magical thinking in its own dogma. Intellect and religious feeling can co-exist, because that religious feeling springs from a place intellect doesn’t reach. The desire to transcend, to conquer, and to endure propels our drive to invent and maps our relations with those inventions.

Silicon Valley, then, is no anomaly, but rather the most recent and most vivid manifestation of our dissatisfaction with our own humanity. Some of its most popular products—Facebook, Twitter, other social networking sites—can function like secularized congregations. Some of its innovations—like Soylent, a powdered substance that is meant to replace regular food—imply some basic inadequacy with the human condition, as if we can improve ourselves by behaving less like people and more like the robots of Levandowski’s dreams.

We can map the genome, hurl satellites into the void, and probe the deepest shadows in the oceans. We can construct intelligences that exist outside human bodies, and we can say all these things exist without the influence of god. We look inward because there is nowhere left to look. We replicate ourselves because there’s nothing left to do. The Levandowskis of this world believe that we will achieve perfection in the creation of a thing that is like us but not us, and that this deity will tell us what we mean.

“You are gods, all of you are children of the Most High,” the Psalmist wrote. We will die like men, but our sons may survive us.