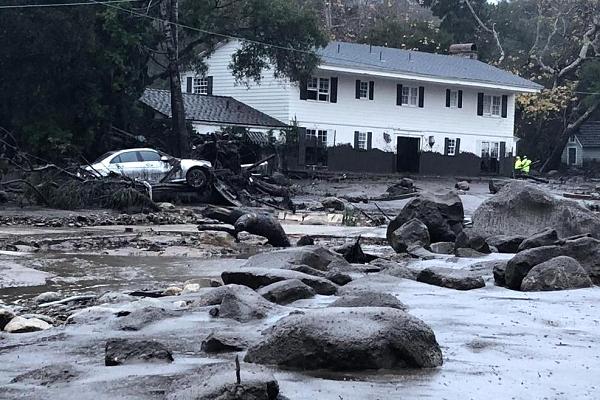 After wildfires – including the largest blaze in California history – tore through Southern California last month, causing billions of dollars in property damage, heavy rains triggered mudslides in some of the areas hardest-hit by the fires – including Montecito in Santa Barbara county, where the most deaths were reported.

The storm may be over, but the hunt for survivors isn’t. So far, 13 people have been confirmed dead, while 25 more were injured and another 50 had to be rescued. But those numbers could rise as the search is deepened and expanded Wednesday, with a major search-and-rescue team arriving from nearby Los Angeles County and help from the Coast Guard and National Guard along with law enforcement, according to the Associated Press.

And as the search for victims ramps up, more photos over the devastation wrought by the mudslides are beginning to emerge.

The mudslides took thousands of Californians by surprise.It was unleashed in the dead of night by flash flooding in the steep, fire-scarred Santa Ynez Mountains. As the AP  explains, scorched areas are especially susceptible to destructive mudslides because the earth doesn’t absorb water well and the land is easily eroded when there’s no vegetation.

Montecito was burned by the Thomas Fire, which erupted Dec. 4 and became the largest ever recorded in California. It eventually spread to more than 440 square miles (1,140 square kilometers) and destroyed 1,063 buildings and homes. It continues to burn deep in the wilderness.

Some witnesses likened the sound of the mud to a freight train or an earthquake as the torrent arrived suddenly,carrying rocks and trees as it washed away cars and trashed homes.

Video shows rescue workers saving a man whose car was washed away in the mudslides.

Victim who was swept away in their vehicle was located by the crew of AirSquad6. Victim was hoisted and flown to awaiting ground personnel. pic.twitter.com/RvX743x0yi

Thomas Tighe said he stepped outside his Montecito home in the middle of the night and heard “a deep rumbling, an ominous sound I knew was … boulders moving as the mud was rising.”

Rescue personnel in Santa Barbara County early on Wednesday morning continued searching for victims where mudslides slammed into homes, covered highways and swept away vehicles early on Tuesday when more than a half-inch (1.5 cm) of rain fell in five minutes, a rate that far exceeds the normal flash flood threshold.

Video and images of the 101 Freeway showed the road completely covered in mud. The road between Montecito and Santa Barbara will remain closed for at least 48 hours, according to Capt. Cindy Pontes of the California Highway Patrol.

The US 101 Freeway at the Olive Mill Road overpass flooded with runoff water from Montecito Creek. pic.twitter.com/SjaSOgOFMm

“It was literally a carpet of mud and debris everywhere, with huge boulders, rocks, downed trees, power lines, wrecked cars, lots of obstacles and challenges for rescue personnel to get to homes, let alone to get people out of them,” Brown said. More than 500 firefighters were assisting with the rescue effort in Santa Barbara alone.

In Burbank, a dozen firefighters sheltered in place after being trapped by mud and debris in Burbank.

But as the storm passed Wednesday morning, a rainbow appeared over Santa Barbara County… 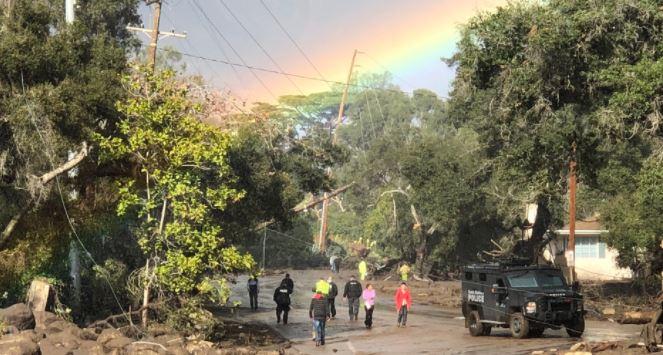 …Proving once again that mother nature does have a sense of humor.