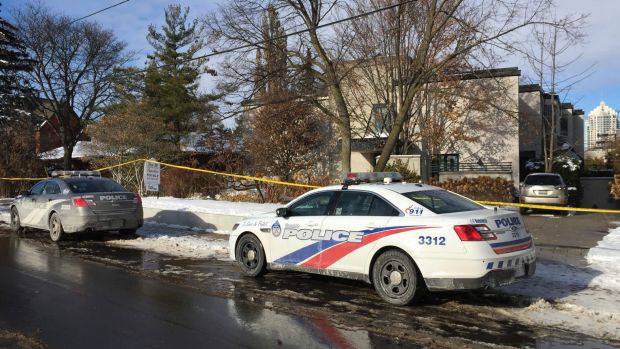 Police cars parked outside the home of billionaire Barry Sherman.

In a gruesome incident that has shocked the Canadian business community, Barry Sherman, the billionaire founder of Canadian generic drug Apotex Inc, and his wife Honey, were found dead yesterday at their Toronto home. Immediately after the news broke, anonymous police and press reports noted that the deaths were “suspicious” and some suggested that it might’ve been a murder-suicide. As we noted on Saturday, according to a preliminary police report, there were no signs of forced entry.

However, while investigators are still awaiting the results of autopsies performed on the couple, their children have expressed outrage at the media’s willingness to jump to conclusions.

Our parents shared an enthusiasm for life and commitment to their family and community totally inconsistent with the rumors regrettably circulated in the media as to the circumstances surrounding their deaths.

We are shocked and think it’s irresponsible that police sources have reportedly advised the media of a theory which neither their family, their friends nor their colleagues believe to be true. The Shermans were among Canada’s most generous philanthropists.

Indeed, the Sherman’s gifts included multimillion-dollar donations to hospitals, schools and charities and had buildings named in their honor. They also gave generously to Jewish organizations.

They even hosted Canadian Prime Minister Justin Trudeau for a Liberal party fundraiser in 2015. In a statement released yesterday, Trudeau said he and his wife were “saddened” by the Sherman’s deaths, and offered “our condolences” to their friends and family.

Sherman founded generic drugmaker Apotex in 1974, and helped nurture it into a giant with 11,000 employees world-wide, including more than 6,000 in Canada.

The company released a statement on Saturday praising Sherman’s philanthropic efforts and what it described as his vision for health care.

Patients around the world live healthier and more fulfilled lives thanks to his life’s work, and his significant impact on health care and health care sustainability will have an enduring impact for many years to come, the statement read.

However, as the Daily Mail points out, not everybody harbored warm sentiments toward the Shermans. Indeed, Barry faced legal action from family members alleging they had been cut out of the company over the years.

Barry Sherman was ranked 363 on Forbes richest people in the world list; the publication put his net worth at $3.7 billion, ranking him just above eBay billionaire Jeffrey Skoll. He was believed to be the 5th richest person in Canada.

The Shermans recently listed their home for sale for nearly C$7 million ($5.4 million). A real estate agent discovered the bodies in the basement while preparing for an open house.