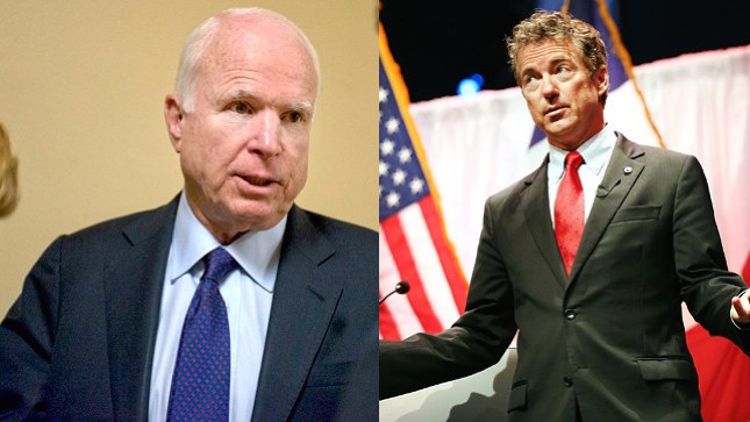 All the evidence points either a soft kill or enduring incapacitation The assailant succeeded at taking him out of the Senate

A close reading of every mainstream media account of the cowardly assault on Senator Rand Paul by his neighbor — Rene Boucher — indicates a premeditated hit.

“Mr. Paul had just stepped off a riding lawn mower on Friday when Rene Boucher, a retired anesthesiologist who lived next door, charged and tackled him. Because Mr. Paul was wearing sound-muting earmuffs, he did not realize Mr. Boucher was coming, according to one of the Kentucky Republicans and a friend familiar with the altercation.”[1]

Clearly this attack on one of the most conservative members of Congress was planned and executed to remove him from the Senate.  Which is exactly what has occurred.

Senator Paul’s injuries are so serious that he cannot travel or carry out his senatorial responsibilities, except those executed by proxy.

Whenever you have a senator like John McCain of Arizona call another — Rand Paul of Kentucky — “a traitor who is serving Russian President Vladimir Putin”, in the Senate chambers, you know there is a major battle going on in the background.  The only way to understand the true depth and breadth of this raging war is to watch the following video titled RUSSIAGATE:

Given this critical back story to the ongoing feud between McCain and Paul, it ought to be obvious that the globalists will do everything in their power to effectively neutralize the senator from Kentucky.  And so they have.

Special Note:
Who has ever heard of a board-certified osteopathic physician stalking a neighboring MD ophthalmologist who also happens to be a U.S. Senator?  And then waiting for the perfect time to blindside the good doctor by plowing into him so hard that he fractures 5 ribs and sustains lung contusions.  This simply does not happen … … … except by purposeful design.  Then the assailant is only “charged with one count of fourth-degree assault” and released on a wholly disproportionate $7500.00 bond.  That’s even more implausible, especially in a conservative state like Kentucky.  This story only gets weirder until you understand that the globalists absolutely detest Rand Paul.  Clearly, the patriotic Paul represents the single greatest “senatorial” threat to their New World Order agenda, and planned One World Government.

Not only is Boucher a fellow physician and neighbor, he’s also a flaming liberal who was avid in his political pursuits to prevent the repeal of Obamacare.  There is no other member of the U.S. Senate who is as determined and fierce about the annulment of the Affordable Healthcare Act as Rand Paul.

Paul knows that Obamacare was neither affordable nor legislated in the interest of the American people.  It was written by and for the U.S. Health Insurance Industry.  The short-lived unconscionable enrichment that resulted for the participating Health Insurance companies is only matched by outright theft from the enrollees who were gouged by skyrocketing premiums and deductibles.

Boucher exhibits all the signs of someone who was set up — wittingly or unwittingly — to vent his extreme anger against Paul in such a manner as to literally take him out.  By the various description of Paul’s injuries, he could easily have died on the spot had medical assistance not been rendered in a timely manner.

The manner in which Boucher completely blindsided Paul (it was like shooting a guy in the back who doesn’t even know there’s a gunman behind him) indicates a complete and total setup.  In other words, the dastardly assailant was probably coached on how to incapacitate his victim. (Typical left-wing violence to achieve their dubious goals)

KEY POINT: The following curious fact was emailed by an SOTN reader: “Something you may have missed about the Rand Paul assailant is the literal meaning of his name.  Rene, French for “reborn” or born again.  And Boucher, French again, for butcher, slaughterer, with roots to ‘Executioner’.  And he was a retired MD specialized in Pain Management, so he really knows how to hurt you.” —DBF

The Left and their NWO masters are getting desperate to the extreme.  The AntiFa-coordinated regime change weekend never materialized on November 4th.  The globalists are backing themselves into a corner with the real Russian scandal known as Uraniumgate.

Because many agents of Deep State are deeply involved in the crime spree concerning Uranium One, the perps will continue to distract the American people at every turn.  They will also attempt to intimidate every whistleblower who is really in the know.  The bold assault on Senator Paul was a loud and clear message: If the globalists can get away with taking out a sitting senator, they can take down anyone inside or outside of government.

Most liberals and lefties, progressives and Democrats are basically cowards of the first order.  They will not expose themselves as the purple revolutionaries that they truly are until they are assured there will be no repercussions.  As a result, their full-blown Purple Revolution has been significantly postponed, if not stymied altogether.

Nevertheless, the globalist cabal is now using the most mind-controlled elements on the Left to do their dirty work.  They are also utilizing their vast treacherous network throughout Deep State to implement black ops and psyops whenever it serves their purposes.  The HARVEST mass shooting in Las Vegas, the staged terror attack in Lower Manhattan, and the recent Texas church massacre are all examples of their handiwork.

With the audacious attack on Senator Rand Paul, it’s apparent that the globalists will employ any tactic necessary to shut down Trump’s agenda.  Likewise, they will enlist any Left-leaning individual who can be coerced or somehow compelled to play the henchman.  Consequently, it’s imperative that everyone on the Right stay vigilant.

The globalists always execute their black ops in jurisdictions where they totally own the judiciary.  In this way they can control the outcome of any court proceedings, both criminal and civil.  See how they remarkably engineered a favorable ruling for Boucher after he practically killed a U.S. Senator.

The man who allegedly attacked Sen. Rand Paul is out on $7,500 bail and — so far — faces only a misdemeanor charge, as questions surround the attacker’s motive as well as the extent of the senator’s injuries.

According to the jailer at Warren County Regional Jail, 59-year-old Rene Boucher was released on $7,500 bail Saturday.
(Source: How in the world did Senator Paul’s attacker get out of jail so easily and with such a weak charge?)

The positive effect of this judicial misconduct, as well as the underlying blatant criminal act, is that TPTB are exposing themselves in ways never seen before.  As the “radioactive” back story emerges regarding the deliberate takedown of Rand Paul, much more serious truth will soon be disclosed.  And, the facts of the case will boomerang on the treasonous NWO cabal that is hellbent on destroying the American Republic.

When even Rand Paul himself has no idea why his liberal neighbor savagely slammed him to the ground, there must be a very serious back story.

FRIEND SAYS RAND PAUL DOES NOT KNOW WHAT PROMPTED ATTACK

What is particularly noteworthy about this shocking incident is the unusual treatment given to it by the mainstream media (MSM).  First, as if on cue, all the MSM news outlets grossly under-reported the severity of Paul’s injuries. See: Senator Rand Paul Assaulted, Injuries More Serious Than Initially Reported