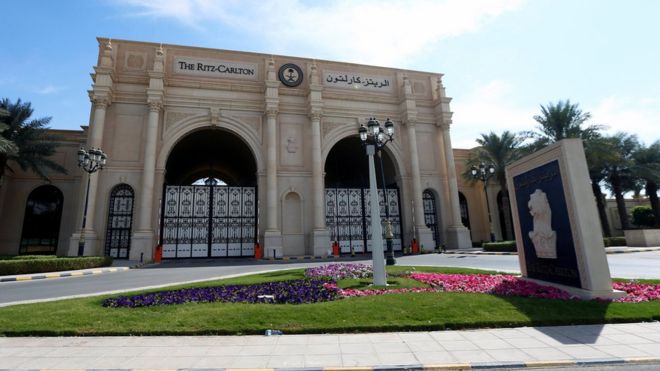 It is a brand that boasts of “luxury hotels and resorts that craft unforgettable travel experiences in the world’s top destinations”.

Presidents, prime ministers and royalty have all been hosted by the upmarket chain Ritz-Carlton, a home away from home for the well-heeled.

But according to reports, the chain’s hotel in the Saudi capital Riyadh has become a gilded cage.

Just months after hosting US President Donald Trump on his first foreign trip as head of state, numerous prominent Saudis are said to be guests of the government – and the hotel is being dubbed the world’s most luxurious prison.

Eleven princes, four ministers and many more have been swept up in what the Saudi authorities describe as an anti-corruption purge in the ultra-conservative kingdom.

Internationally-known billionaire businessman Prince Alwaleed bin Talal is reported to be among those held.

The New York Times has published a video that appears to show the new role of the Ritz-Carlton Riyadh.

In the video, people – possibly guards – can be seen lying on mats covered with brightly coloured blankets in what appears to be one of the hotel’s ballrooms. Uniformed men are also visible, while a modern military-style rifle stands against a wall.

The Guardian reports that paying guests at the hotel were told late on Saturday evening that they should assemble in the lobby with their luggage, before being transported to other hotels in the Saudi capital.

It quotes a senior Saudi official as saying the authorities could not have put the people involved in a jail, and this was “the most dignified solution” available.

Attempts to make a future booking at the hotel on Tuesday proved – perhaps not surprisingly – a fruitless exercise.

The Ritz Carlton Riyadh’s website shows that there are no rooms available in November, but at one point it did suggest that a double room could be booked for a few days from mid-December for the princely sum of 1,300 riyals (about $350) a night.

However, this window soon disappeared and this particular branch of the luxury travel accommodation empire appears to be closed to new business for the foreseeable future.