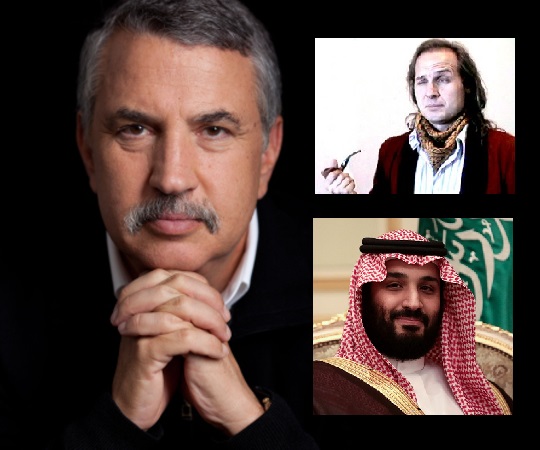 On the same day that New York Times columnist Thomas “suck on this” Friedman penned what reads like a fawning hagiography of Saudi Crown Prince Mohammed bin Salman, and which glowingly presents the soon to be king as a modernizing reformer intent on liberalizing Islam, Human Rights Watch issued a report exposing a new Saudi counterterrorism law as little more than a dictator’s tool for crushing dissent.

The new law, published on November 1 of this year, replaces a 2014 law which defined specific acts of terror and corresponding sentencing guidelines; however, the November decree is described as incredibly vague and broad in its application while allowing for severe consequences for so much as criticizing the king or crown prince. The kingdom has long aggressively rooted out dissent, arresting and prosecuting individuals for engaging in protest, even if merely on social media.

It includes criminal penalties of 5 to 10 years in prison for portraying the king or crown prince, directly or indirectly, “in a manner that brings religion or justice into disrepute,” and criminalizes a wide range of peaceful acts that bear no relation to terrorism.

The law also brings terror-related cases under the direct administrative oversight of the king. HRW provides examples of the types of vague protest related activities that Saudi Arabia can now deem “terrorism”:

The new law, however, does not restrict the definition of terrorism to violent acts. Other conduct it defines as terrorism includes “disturbing public order,” “shaking the security of the community and the stability of the State,” “exposing its national unity to danger,” and “suspending the basic laws of governance,” all of which are vague and have been used by Saudi authorities to punish peaceful dissidents and activists. Prominent human rights activists Abdullah al-Hamid and Mohammed al-Qahtani are serving 11-year and 10-year sentences respectively, based on charges that contain similar language. Human rights activist Essam Koshak is currently on trial on similar charges.

Though HRW has consistently shown itself to be merely critical of countries and regimes considered enemies of the West (for example rarely criticizing US/UK allies while focusing on Syria or Russia), the report comes amidst growing public awareness of the long ignored and forgotten Saudi-US bombing of Yemeni civilians, and consequent humanitarian disaster still unfolding.

Even less known is that fact that Saudi Arabia recently flattened an entire civilian town, Awamiya, in the country’s restive Shia-dominated east in a sectarian driven campaign to crush dissent with overwhelming military force. The siege of Awamiya last summer was well documented, with Saudi war crimes caught on video, yet fawning pro-Saudi journalists in major newsrooms in the West have never so much as raised the issue with the Saudis or their US State Department backers.

But of course, most astute observers of developments in the Saudi kingdom of horrors hardly need convincing that Saudi’s rulers are among the most backwards and repressive on earth, which makes Thomas Friedman’s interview and column on MbS all the more absurd and laughable.

In honor of Thomas Friedman’s latest love letter to Saudi here is 70 years of the NY Times describing #Saudi royals in the language of #reform.

In Dante's Inferno the second pit of the eighth circle of hell is occupied by sycophants, groveling in excrement that represents the insincere flattery of their words. There’s not, we will likely find out, a pit deep enough—nor feces potent enough—suitable for Thomas Friedman. https://t.co/5vUpE4UgUK

Friedman is now being roundly mocked on social media, and surprisingly even among some mainstream media pundits who tend to me more reserved in their sycophant tendencies.

I get that people don't like that Tom Friedman interview with MbS. Curious, though: What should the crown prince of Saudi Arabia do instead?

Below are some of the more obscene and comical highlights from Friedman’s “Saudi Arabia’s Arab Spring, at last”.

Friedman introduces the current MbS crackdown as “the most significant reform process underway in the Middle East today:

I never thought I’d live long enough to write this sentence: The most significant reform process underway anywhere in the Middle East today is in Saudi Arabia. Yes, you read that right. Though I came here at the start of Saudi winter, I found the country going through its own Arab Spring, Saudi style.

Friedman gets worn out by the “fire hose of new ideas” from the late night session with the charming young dictator:

After nearly four hours together, I surrendered at 1:15 a.m. to MBS’ youth, pointing out that I was exactly twice his age. It’s been a long, long time, though, since any Arab leader wore me out with a fire hose of new ideas about transforming his country.

The kingdom’s recent spate of mass arrests, which now include allegations of torture and asset shakedowns by the state, is based in the supposedly heroic vision of noble-minded MbS:

…his government arrested scores of Saudi princes and businessmen on charges of corruption and threw them into a makeshift gilded jail — the Riyadh Ritz-Carlton — until they agreed to surrender their ill-gotten gains. You don’t see that every day.

And apparently Friedman knows what the “silent majority” thinks while being entertained at one of the royal family’s private palaces:

The Saudi silent majority is clearly fed up with the injustice of so many princes and billionaires ripping off their country. While foreigners, like me, were inquiring about the legal framework for this operation, the mood among Saudis I spoke with was: “Just turn them all upside down, shake the money out of their pockets and don’t stop shaking them until it’s all out!”

With zero substantive evidence, we are assured MBS is a liberalizing and moderating force who will deliver universal human rights and equality to the Wahhabi kingdom:

MBS is on a mission to bring Saudi Islam back to the center. He has not only curbed the authority of the once feared Saudi religious police to berate a woman for not covering every inch of her skin, he has also let women drive. And unlike any Saudi leader before him, he has taken the hard-liners on ideologically. As one U.S.-educated 28-year-old Saudi woman told me: MBS “uses a different language. He says, ‘We are going to destroy extremism.’ He’s not sugarcoating. That is reassuring to me that the change is real.”

“It blew my mind” says Friedman:

But as someone who has been coming here for almost 30 years, it blew my mind to learn that you can hear Western classical music concerts in Riyadh now, that country singer Toby Keith held a men-only concert here in September, where he even sang with a Saudi, and that Lebanese soprano Hiba Tawaji will be among the first female singers to perform a women-only concert here on Dec. 6.

“Perfect is not the menu” concludes Friedman as the Saudis kill and maim tens of thousands of Yemeni civilians just across the border:

But can MBS and his team see this through? Again, I make no predictions. He has his flaws that he will have to control, insiders here tell me. They include relying on a very tight circle of advisers who don’t always challenge him sufficiently, and a tendency to start too many things that don’t get finished. There’s a whole list. But guess what? Perfect is not on the menu here. Someone had to do this job — wrench Saudi Arabia into the 21st century — and MBS stepped up. I, for one, am rooting for am rooting for him to succeed in his reform efforts.

Indeed, MBS instructed me: “Do not write that we are ‘reinterpreting’ Islam — we are ‘restoring’ Islam to its origins — and our biggest tools are the Prophet’s practices and [daily life in] Saudi Arabia before 1979.” At the time of the Prophet Muhammad, he argued, there were musical theaters, there was mixing between men and women, there was respect for Christians and Jews in Arabia. “The first commercial judge in Medina was a woman!” So if the Prophet embraced all of this, MBS asked, “Do you mean the Prophet was not a Muslim?”

Friedman concludes by quoting an anonymous woman on “hope” and “change” and a clichéd line, “anything is possible”:

And the fact that starting in June that will never again be so “gives me so much hope. It proves to me that anything is possible — that this is a time of opportunity. We have seen things change and we are young enough to make the transition.”