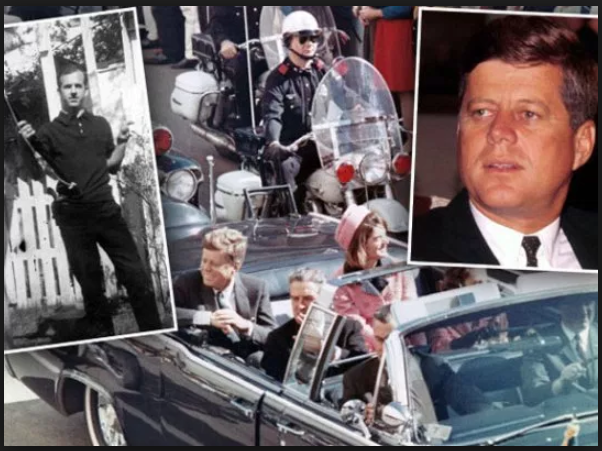 Thanks to the brilliant research of Larry Rivera, we now have proof that the JFK autopsy photos are not of the body of JFK, that Lee Oswald was framed and that The Warren Report (1964) was a sham. We can now also prove that the backyard photographs were faked by pasting Lee Oswald’s face on someone else, as he claimed, and have identified the body-double as Dallas Police Officer, Roscoe White.

We have demonstrated that JFK autopsy photographs published by Robert Groden–who served as a special consultant to the HSCA during its re-investigation of the assassination during 1977-78 and who falsely testified that the man in the doorway was not Lee Oswald but a co-worker, Billy Lovelady, whom we have proven was standing beside Lee–were not of the body of John Fitzgerald Kennedy.

We have likewise substantiated that the man in the doorway of the Texas School Book Depository, whose presence was caught in the famous photograph taken by Associated Press photographer, James “Ike” Altgens, was Oswald. He not only has the same height, weight, build, shirt and t-shirt as Lee was wearing when arrested, but his facial features are those of Lee Oswald as well. 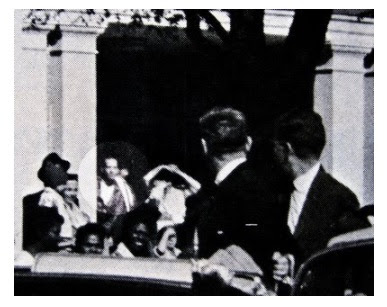 The government maintains that Billy Lovelady was the man in the doorway, even though Billy went to the FBI on 29 February 1964 wearing the shirt that he had worn that day and was photographed by them. It was a red-and-white, vertically-stripped short-sleeved shirt, nothing like the long-sleeved, richly textured (and somewhat worn) shirt on Doorman. Lovelady could not have been Doorman.

In his book, The Killing of a President (1994), Robert Groden published (what he has long since claimed to be) “a definitive photographic record of the Kennedy assassination”. On pages 72 and 82, we find two photographs from the autopsy of JFK for which Groden takes credit for himself having discovered. But it turns out that, when compared with photographs of the president, the body is not even that of JFK! 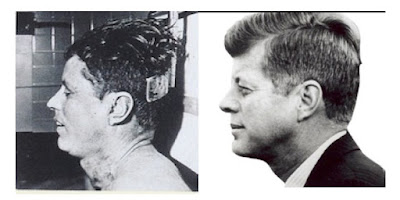 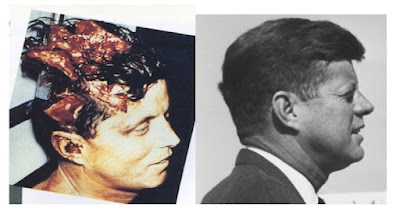 This finding has lent credence to the conjecture of Robert Morningstar that J.D. Tippit, Dallas Police Officer, whom Lee Oswald was accused of having killed (which was impossible, since Lee was already at The Texas Theater when it was being committed), may have been shot to serve as a body double for JFK. Here is one of the photos Robert has advanced, which certainly deserves further investigation: 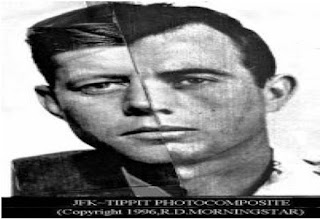 Since Earl Rose, M.D., a noted medical examiner, conducted an autopsy of Tippit in Dallas that began at 3:15 PM/CT on 22 November 1963, the use of his body at Bethesda appears to be problematical, where the more likely explanation is that the body of “a Major”, whom Dennis David had been instructed not to log in (in violation of standard procedure at the morgue), was instead used in creating these fake images.

From Robert Morningstar’s latest presentation of his case for Tippit as the body-double at Bethesda, we have the above image, which, while not as definitive as an overlay (which we are going to create), makes it already apparent that he turns out to be an implausible candidate for that role. Morningstar had the right idea, however, because even if Tippit was not the corpse in the photo, it certainly cannot have been JFK.

Here is the famous photograph of Lee holding the Mannclicher-Carcano with which he is alleged to have shot JFK, the revolver with which he is supposed to have shot Dallas Police Officer J.D. Tippit, and holding two communist newspapers, The Worker and The Militant, which was used to implicate him in the crime by combining motive and means with the already established opportunity to kill JFK: 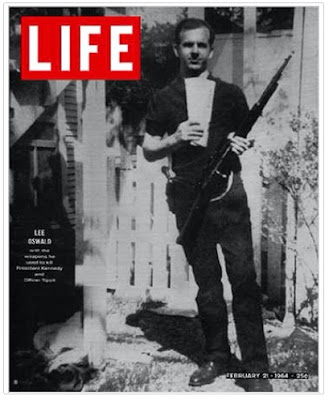 Jim Marrs and I analyzed this photograph, “Framing the Patsy: The Case of Lee Harvey Oswald” (20 October 2015), and concluded that it had been staged as Lee had told Will Fritz. We inferred–on the basis of the height, build and chin, but also an abnormality of his right forearm–that the stand-in had been Roscoe White, a Dallas Police Officer with ties to the CIA. Larry Rivera has now confirmed: 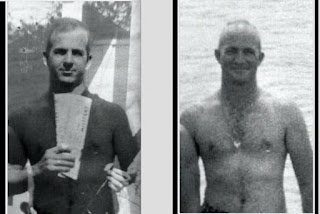 The Warren Commission went out of its way to obfuscate the face that Lee Oswald had been captured in a famous photograph by AP photographer, James “Ike” Altgens, by manipulating testimony to make the case that the figure extending out from the doorway was instead co-worker, Billy Lovelady. The image of the area that has become the object of intense study was advanced by Robert Groden: 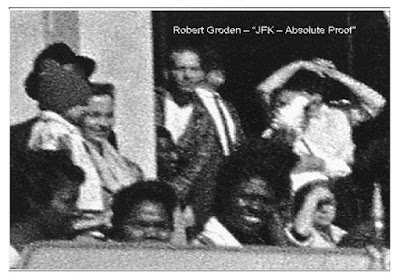 Notice that Doorman is missing his left shoulder, because Black Tie Man is both in front and behind him at the same time–a photographic impossibility, if it were real. The man with his arms upraised to shadow his eyes from the Sun is wearing a short-sleeved shirt, which has been massively obfuscated, where Larry has confirmed that Doorman is Lee Oswald. Here is proof that Oswald was Doorman:

Larry has also demonstrated that Doorman is not Billy Lovelady:

And he has proven that the man standing beside Lee was Lovelady:

When identities are corrected and colorized, it would have looked like this: 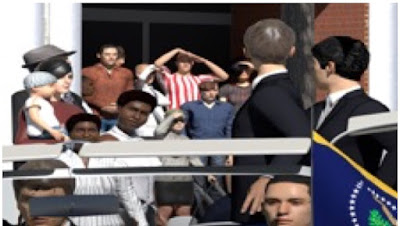 That Groden has become the champion of Lovelady as Doorman has many ironic aspects, not the least of which is that, before he became a consultant to the HSCA, himself maintained that Lee was in the doorway at the time of the motorcade, which was the subject of a newspaper article about him, “Two Conspiracies in JFK Death?”, Sentinel Star (20 April 1976), before he underwent a conversion: 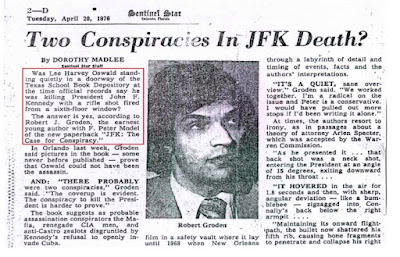 Making a Mockery of a Mock Trial

A mock trial of Lee Harvey Oswald was scheduled to be held on the campus of the University of Houston on 16-17 November 2017, during which Larry Rivera would have been the key expert to testify that Lee was in the doorway. He already had his tickets and had forwarded his proofs when he was notified that he had been removed from the witness list! Here is our discussion about this absurdity:

The trial ended in a hung jury with a vote of 6-5 for conviction (where one of the prospective jurors skipped the trial), but had Larry been allowed to testify, they would have acquitted him after perhaps five minutes of debate, because his research leaves no doubt about it. Instead of a mock trial, they made a mockery of the trial–and sabotaged decisive proof that Lee Oswald was an innocent man.

Jim Fetzer, a former Marine Corps officer, is McKnight Professor Emeritus on the Duluth Campus of the University of Minnesota and co-editor of moonrockbooks.com.