FBI Director Telegraphs Nothing Out Of Sheer Necessity 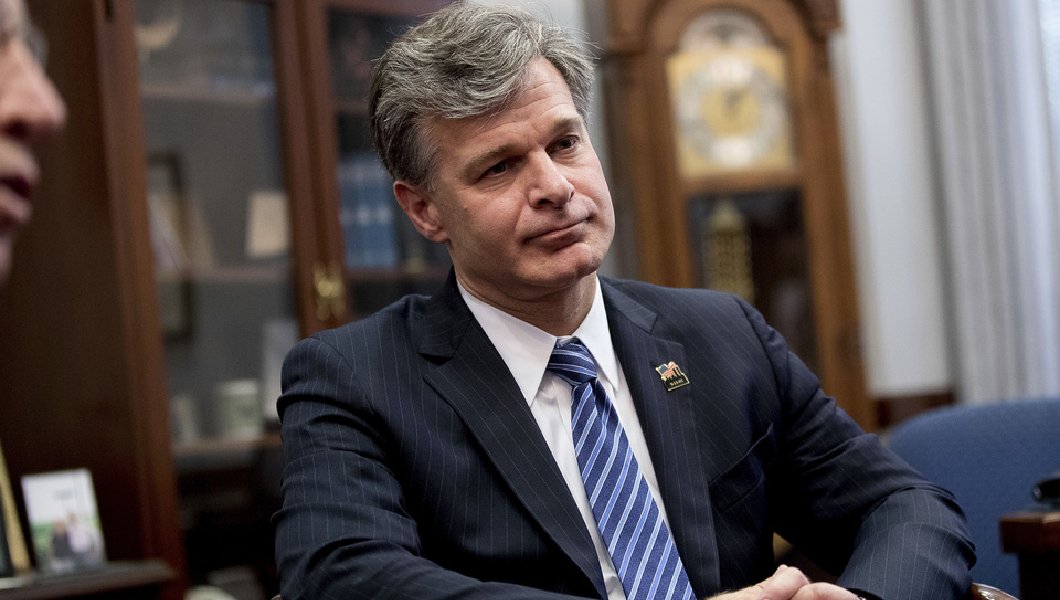 FBI Director Telegraphs Nothing Out Of Sheer Necessity

Elder Patriot – Very soon the names Christopher Wray and Noel Francisco will be the stars of 24/7-cable news programming. Both are Trump appointees who have compiled enough evidence to begin the prosecution of the Clintons and those in the highest offices of the FBI who protected them. And, neither man can be bought.

Politics will determine whether their investigations will be allowed to make the case for prosecuting Obama’s cabinet members who made the call to squash the evidence in multiple incriminating cases and who violated FISA court rules of evidence to obtain warrants in order to spy on the man who threatens to expose their criminally treasonous syndicate, President Trump.

Wray was Trump’s choice to replace Comey to lead the FBI after Trump became aware of how severely Comey, and his predecessor Robert Mueller, had corrupted the agency and its mission when it chose to protect the Clintons.

Wray is highly respected lawman and passed Senate confirmation by a 92-5 vote.

The vote to confirm Francisco as Solicitor General was 50-47, along party lines. That should come as no surprise because as the Solicitor General of the United States, Francisco would be responsible for conducting and supervising the government’s litigation at the Supreme Court.

In other words, Francisco will be prosecuting the case against those who corrupted the FBI and his reputation says that he will do it thoroughly and professionally to the best of his considerable legal abilities.

The Solicitor General is the last firewall the American people have against the government corruption of the past administration.

Francisco has built a reputation for his steadfast commitment to the rule of law and his staunch defense of the Constitution. To say Francisco’s appointment has Democrats worried cannot be overstated.

And now FBI Director Christopher Wray has seen enough evidence against those who are attempting to remove our duly elected president on trumped up charges that he’s preparing to clean house at the FBI and to present the case for prosecution to Francisco.

Whether Wray and Francisco’s investigation will ensnare former AGs Eric Holder and Loretta Lynch will be a political call that would then signal Wray and Francisco’s willingness to go after the big fish, ex-President Obama and other members of his cabinet including former National Security Advisor Susan Rice.

One of the triggers for Wray’s decision to move forward is reported to be the ironclad proof that Deputy Director Andrew McCabe essentially accepted a $500,000 bribe from the Clintons’ in the form of a campaign donation to his wife who was convinced to run for the Virginia Senate by Clinton bagman Terry McAuliffe.

The fact that McCabe was deeply involved in what amounted to covering up Hillary’s email “scandal” has left Wray with no choice but to remove McCabe by whatever means necessary if he is to restore the FBI’s integrity.

The recent revelation that neither Comey nor McCabe saw fit to notify the vast majority of the 500-plus U.S. officials that Russian hackers had targeted their personal Gmail accounts was also indefensible in Wray’s view. Wray found trying to defend the agency’s lack of action in this matter to be embarrassing. Wray now wants to know who, inside our government, they were protecting by their silence besides the Russian hackers.

In addition to the embarrassment involved, Wray sees it as one more example of the FBI conspiring with the Obama administration and Hillary Clinton to hide their collusion to advance Russian interests.

Under Mueller, the FBI buried overwhelming evidence of Russian bribery, extortion, kickbacks and money laundering as the nuclear power sought to gain control of the world’s uranium supply.

Mueller also saw no reason to investigate when Hillary, with the approval of then president Obama, helped Russia make a major technological leap after they authorized sharing information technologies to help build the Russian equivalent of Silicon Valley in Skolkovo.

Wray also has enough evidence to convict his predecessor, Jim Comey, on conspiracy charges for his involvement in refusing to prosecute Hillary, Cheryl Mills, Huma Abedin, and a number of her other associates on violations of the Espionage Act. Wray has likely determined that those 33,000 deleted emails weren’t just mishandled accidently – alone that is a violation of the act – but were deliberately exposed to foreign agents and contained at least 2,100 highly secret transmissions.

All of this has left Wray with little choice in this matter. While every president, and every president’s administration, makes decisions that can be deemed questionable and even illegal by future administrations, they have always left town after their term’s were completed and left the field clear for the new president to carve their trail. Not so with Obama and Clinton.

Obama and Clinton committed to running a resistance in exile relying on their administration’s holdovers scattered everywhere throughout the federal bureaucracy, their judicial appointments, the Washington political establishment that they corrupted long ago, and their control over the mainstream media to destroy their successor.

The depths of their criminality and their treasonous actions apparently left Obama and Clinton with little choice but to try to destroy President Trump. Now, in the interest of defending our American republic Christopher Wray has no choice but to take them all down.

When the indictments come they will likely encompass everyone who served at a high level in the Obama administration. There is no other way. As Jim Malone asked famed FBI agent Eliot Ness:

“What are you prepared to do? If you open ball on these people Mr. Ness, you must be prepared to go all the way because they won’t give up the fight till one of you is dead.”