NBA Orders Players To Stand For The National Anthem 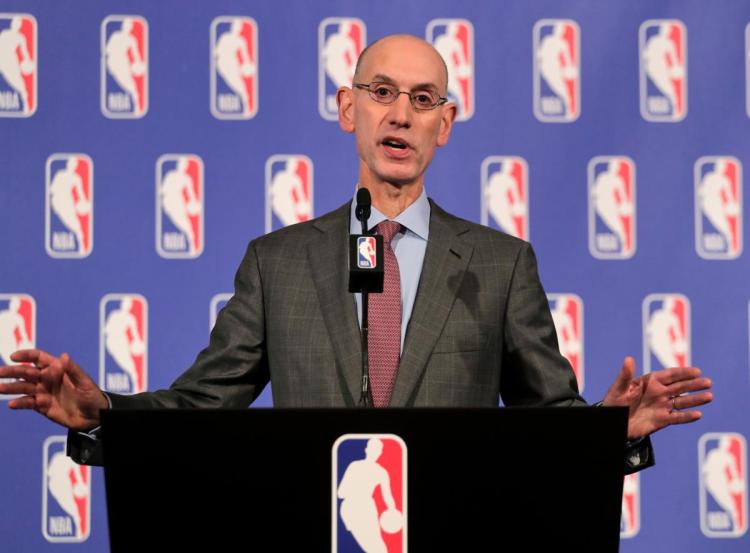 NBA sends out memo to remind players, coaches they must stand for national anthem.

NBA Orders Players To Stand For The National Anthem

With the NFL finding itself trapped in a vise of sliding viewership on one hand, and a sudden plunge in its favorability as a result of the ongoing “kneeling” feud with President Trump, which according to a just released POLITICO/Morning Consult poll has plunged from 30% on September 21 to just 17% on September 28, the most unfavorable in history…

… other sports franchises are desperate to avoid the backlash that NFL Commissioner Roger Goodell appears to have unleashed upon his league.

As a result, the NBA which has seen a similar steep drop in viewership in recent years is taking emergency proactive measures, and according to the Associated Press, NBA Commissioner Adam Silver said he expected players would stand for the anthem, followed up by a memo in which the NBA “recommended teams address fans or show videos expressing themes of unity before their first home games,” while again reminding them of the rule that players must stand for the national anthem.

In the memo, obtained by the Associated Press, Deputy Commissioner Mark Tatum suggested teams use their opening games “to demonstrate your commitment to the NBA’s core values of equality, diversity, inclusion and serve as a unifying force in the community.” He recommended an address by a player or coach to fans before the anthem, or a video featuring players or community leaders speaking about important issues and showing photos from past community events.

Tatum said the league supports and encourages players to express their views on matters that are important to them, while reminding of the rule that players, coaches and trainers stand respectfully for the anthem.

“The league office will determine how to deal with any possible instance in which a player, coach or trainer does not stand for the anthem. (Teams do not have the discretion to waive this rule),” the memo says.

The memo comes as the NBA’s preseason schedule is set to begin on Saturday with two games, including the NBA champion Golden State Warriors hosting Denver. As a reminder, the feud between Trump and certain sport players escalated last Saturday when Trump withdrew an invitation to Warriors’ Stephen Curry:

Going to the White House is considered a great honor for a championship team.Stephen Curry is hesitating,therefore invitation is withdrawn!

This in turn prompted the entire Warriors team to announce that “while we intended to meet as a team at the first opportunity we had this morning to collaboratively discuss a potential visit to the White House,” the statement read, “we accept President Trump has made it clear that we are not invited.”

As the AP adds, the memo builds on discussions held by the NBA’s Board of Governors this week, and follows up on one Silver and players association executive director Michele Roberts sent to players recently. It recommends that teams organize internal discussions to hear the players’ perspectives, if they haven’t already, and to start or expand programs within their communities.

“The players have embraced their roles in those efforts and we are proud of the work they do in our communities,” Tatum wrote.

While the NFL never made an explicit demand of players to stand for the national anthem, prompting many teams to do the opposite, or simply not leave the locker room, now that the NBA has taken the extra step of reminding players of what the rules are and that they “do not have the discretion to waive this rule”, it will be especially interesting to observe how many players will flaunt the commissioner’s demand, what the NBA’s response to said rule violation will be, and whether the NBA’s viewership and ad revenues will see a similar sharp decline which ultimately will have an adverse impact on the players’ own bank accounts.