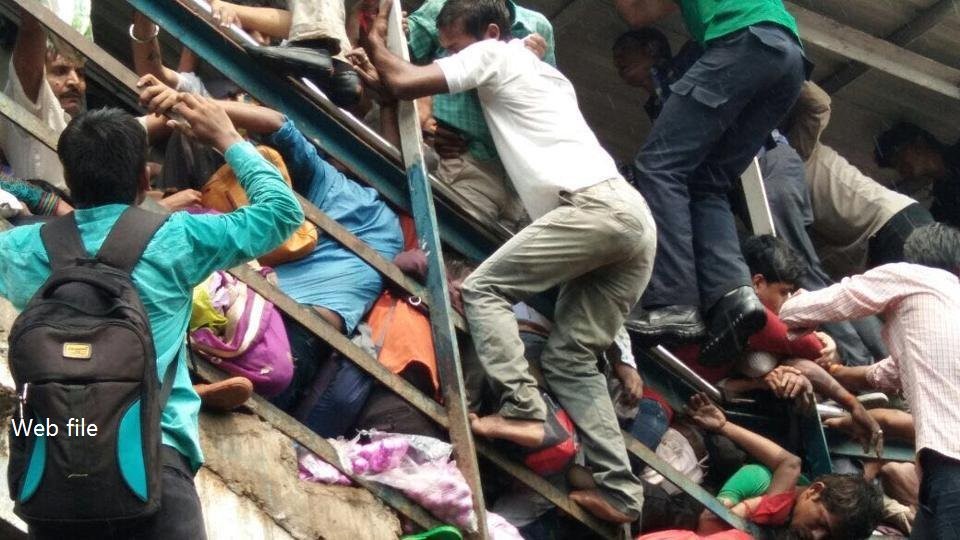 Commuters tried to rescue the trapped and injured

A stampede on a footbridge at a Mumbai railway station has left 22 people dead and injured more than 30, Indian officials report.

It was triggered by overcrowding and people seeking shelter from monsoon rains, the officials said.

The injured have been taken to a nearby hospital and senior railway officials are at the scene.

“The incident occurred as heavy rains lashed Mumbai and passengers took refuge on the foot overbridge. People at the front slipped and the huge crowd toppled over, leading to the stampede,” Indian Railways spokesman Ravindra Bhakar told AFP news agency.

“Twenty-two dead have been confirmed, 14 men and eight women… Some 32 passengers are injured.”

Akash Koteja, one of the injured, said: “Trains were rolling in and some people wanted to get out of the station, but others were not making way. When a few tried, it led to a stampede.”

TV footage from the scene showed commuters trying to rescue fellow passengers from the crush and revive people by pumping their chests.

“We put everybody who was injured in cars, police vans and ambulances and tried to take them to the hospital as quickly as possible,” said one witness quoted by AFP.

Why did it happen?

An investigation has been launched into the causes of the disaster, but overcrowding on India’s vast, crumbling railway network is a perennial problem.

The BBC’s Yogita Limaye in Mumbai says the incident has once again put the spotlight on Mumbai’s transport infrastructure, which is often criticised for being old and insufficient given the millions of people who use it every day. 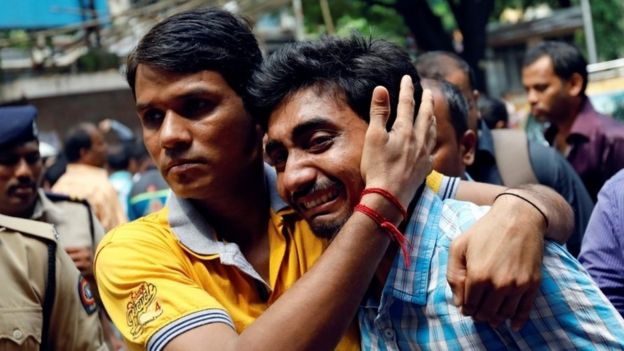 REUTERS – Relatives of victims sought news at the hospital

How have Indian leaders reacted?

Indian Prime Minster Narendra Modi tweeted: “My deepest condolences to all those who have lost their lives due to the stampede in Mumbai. Prayers with those who are injured.”

He added that Railway Minister Piyush Goyal was in Mumbai “taking stock of the situation and ensuring all assistance”.

The chief minister of Maharashtra state, whose capital is Mumbai, announced compensation for the families of the dead and said the medical bills of the injured would be paid.

Devendra Fadnavis also promised to take “strict action” action against those responsible for the stampede.

“My heart goes out to the families who lost their loved ones,” he said during a visit to Singapore.