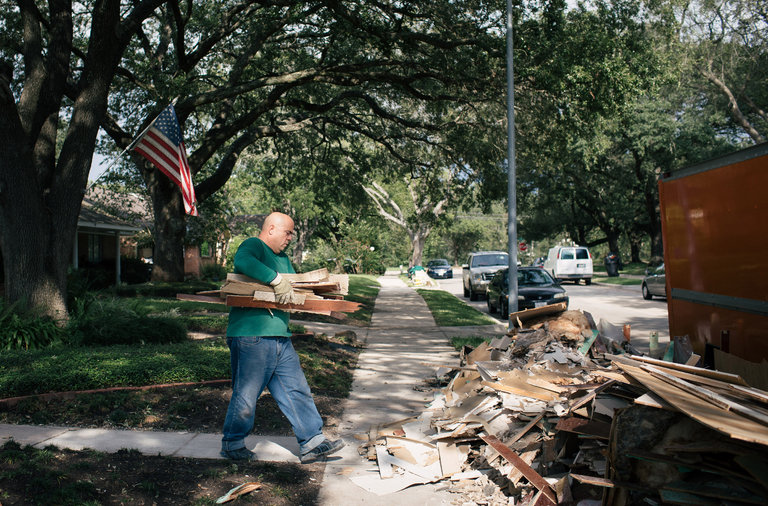 Cleaning out a damaged home on Wednesday in Houston. Recovery aid will be a key project for Washington. Credit Alyssa Schukar for The New York Times

Gone are the confrontational talk of a government shutdown and the brinkmanship over the debt limit. Instead, both Mr. Trump and his putative allies in Congress — many of them professed fiscal hawks — are promising an outpouring of federal aid to begin a recovery and rebuilding effort that will last for years and require tens of billions of dollars, if not substantially more, from Washington.

The storm has utterly transformed the federal fiscal picture.

“This is going to change the whole dynamic for September and, quite frankly, for the Republican establishment for the remainder of the 115th Congress,” said G. William Hoagland, a longtime chief budget adviser to Senate Republicans who is now a senior vice president at the Bipartisan Policy Center. “The truth of the matter is, they don’t need money to build a wall in Texas, but to rebuild the shoreline in Texas.”

Facing a difficult September, deeply divided over spending and what to do about the debt limit, Mr. Trump and congressional leaders may find that a devastating storm has provided them the common cause that has proved so elusive after their failure to repeal and replace the Affordable Care Act.

Mr. Trump is eager to be seen as a competent manager in his first big test in a natural disaster, and a shutdown could shatter that image. Lawmakers want to deliver for the Texas and Louisiana communities pounded by Harvey, a region that is not only a driver of the national economy but a center of Republican strength.

At the same time, a huge relief program tacked on to the federal deficit could undermine the claim by the president and his party that they are stewards of a leaner, more efficient federal bureaucracy.

The magnitude of the storm threatens to overwhelm that agenda as well as relegate to the background Mr. Trump’s demands for a border wall. Representative Mark Meadows, Republican of North Carolina and the chairman of the hard-right Freedom Caucus, has already said that members of his group will not insist, for now, on funding it.

And it may make it more difficult for Mr. Trump to follow through on his promises of a broad crackdown on illegal immigration.

The altered landscape is going to force conservative lawmakers who have balked at tabs for past storm relief to swallow hard and rally behind a long-term recovery program. Senators Ted Cruz and John Cornyn, two Texas Republicans who opposed a spending package after Hurricane Sandy pummeled the Northeast in 2012, now find that the boot is on the other foot, leaving them responsible for delivering dollars to their state.

“This is going to be costly,” Mr. Hoagland said, “and the Cruzes of the world are going to have to belly up to the bar in a way they are not familiar with.”

Republicans who had been bracing for a September showdown over how to fund the government are rapidly changing course. While they await potentially staggering damage assessments, they are pledging to do whatever it takes to help those flooded out along the Gulf Coast.

As Representative Tom Cole of Oklahoma, a senior Republican member of the House Appropriations Committee, put it, “There will be members who will have to eat a little crow, but the bottom line is the votes are there” because “Congress wants to look functional.”

Part of looking functional, he said, is ending discussion of shuttering the government in a dispute over whether to provide money for a wall border on the southern border.

“You certainly can’t have the government shut down in the middle of a national crisis,” Mr. Cole said.

The storm’s ramifications for the conservative agenda beyond fiscal issues have yet to play out.

Under pressure from the right to end a special Obama-era residency program for undocumented immigrants brought to the United States as children, Mr. Trump has for months appeared torn over what to do. Eliminating the program, Deferred Action for Childhood Arrivals, could seem especially punitive now because Texas is home to one of the largest populations of so-called dreamers, though the president could move forward on that as early as Friday. 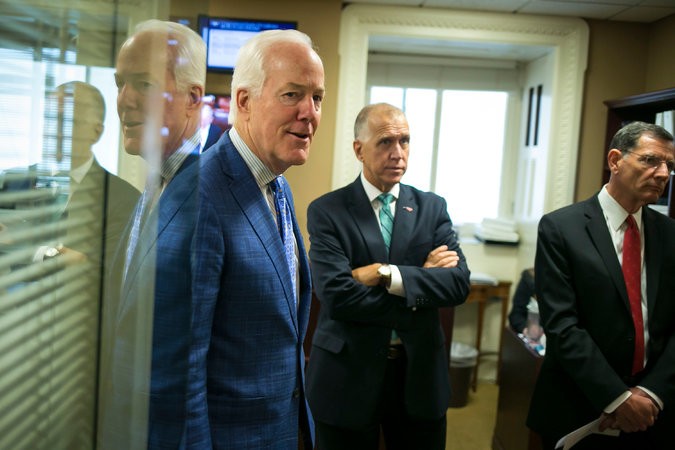 The debate over migrant labor could also be influenced because repairing or replacing huge numbers of homes and restoring damaged infrastructure will require thousands of construction workers, who were already in short supply around the country. Immigrant labor, both documented and undocumented, proved critical in the rebuilding effortthat followed Hurricane Katrina in 2005.

The storm-driven congressional budget reassessment is already underway. Before Hurricane Harvey, House Republicans were planning to vote next week on a spending bill that would have shifted nearly $876 million away from the Federal Emergency Management Agency. That plan is now out the window, and lawmakers are instead focused on funneling more money toward FEMA.

“Budgetary circumstances have changed significantly since the bill was drafted earlier this summer,” said Jennifer Hing, a spokeswoman for the Appropriations Committee. “Given the current situation, the committee is reassessing the issue and is actively involved in communication with the administration on the needs and the timing of those needs.”

The specifics of how the spending package will come together have yet to be determined. Hurricane relief will be part of a messy confluence of issues that include the debt-limit hike, a still-emerging tax-cut proposal that could also add to the deficit and a Republican push for more Pentagon spending.

At a minimum, Republican leaders seem ready to act quickly to make sure sufficient money is available to respond to Harvey while passing a stopgap measure to keep the government open past the end of the fiscal year on Sept. 30. Under that framework, the toughest spending decisions would be pushed off until as late as December.

While supporting the storm aid, some House conservatives are warning that they will not look kindly on any effort to link the debt-limit hike to hurricane relief. And conservative advocacy groups, warily eying hurricane spending, are worried it could quickly get out of hand.

Mr. Cornyn sought to provide reassurance that Congress was not going to go overboard on disaster spending, saying that “this is not just money that’s doled out for any purpose.”

“This has to be targeted for disaster relief and recovery from Hurricane Harvey,” he said.

But it is clear that Republicans — already struggling, despite their control of the White House and both houses of Congress — are entering a changed political and fiscal environment.