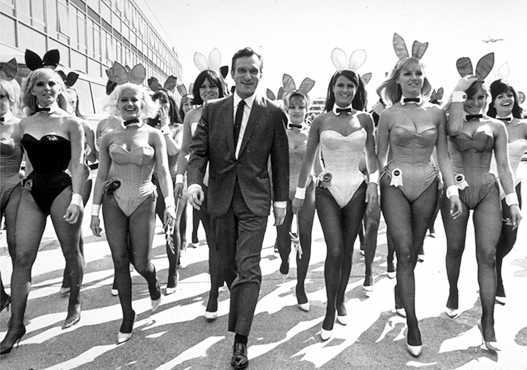 PLAYBOY founder, Hugh Hefner, died Wednesday.
No man has done more to destroy family values
by making sex an end in itself.
While the PLAYBOY philosophy was touted as the
height of masculinity, it was really
in essence homosexual.
This key article describes how baby boomers were brainwashed to eschew marriage in favor of promiscuity. This social engineering was designed to induct society into a satanic cult, Jewish cabalism (Freemasonry.) see also: Makow  How Society Became a Sex Cult

(Originally posted in 2001)
by Henry Makow Ph.D.
What sort of man reads PLAYBOY?
He is fastidious about his appearance, his home, and his possessions. He wants as much sex as possible and chooses sexual partners mostly on the basis of appearance. He is self-absorbed and doesn’t want emotional involvement or commitment. He thinks a woman would stifle him and children would be a burden.
Does this sound like homosexual behavior? It is also the masculine ideal purveyed by PLAYBOY magazine to men since the 1950’s.
At the End of Time, when they open the envelope labeled “What is the essence of manhood?” I suspect it will say: “Looking after women and children. Men act as God’s agent by creating and supporting new life. The family is the red blood cell of society.” But in 1972, when circulation peaked at seven million, 75% of college men got their ideas about masculinity from PLAYBOY, at an incalculable price to themselves, women, children, and society.
The similarity between the PLAYBOY and homosexual ideal is no coincidence.“The Kinsey Report” (1948) shaped current mainstream attitudes to sex. It championed unfettered sexual expression and became the manifesto of the counterculture and sexual revolution.
Kinsey said that deviant and unhealthy sexual behavior was so common as to be normal. Thanks to psychologist Dr. Judith Reisman, we now know that the “Kinsey Report” was a fraud. Alfred Kinsey,left, a Rockefeller-funded University of Indiana zoologist, pretended to be a Conservative family man. In fact, he was a child molester and homosexual pervert who seduced his male students and forced his wife and associates to participate in pornographic home movies.
Kinsey’s agenda, in Reisman’s words, was “to supplant what he saw as a narrow procreational Judeo Christian era with a promiscuous “anything goes” bi/gay pedophile paradise.” (Crafting Gay Children: An Inquiry, p.4)
More than 25% of his sample were prostitutes and prison inmates including many sex offenders. Kinsey, who died prematurely of “orchitis,” a lethal infection in his testicles that followed years of orgiastic “self-abuse”, said 10 percent of American men were gay when, in fact, only two percent were.
Kinsey and his team of pedophiles abused 2,000 infants and children to prove that they have sexual desires.
Reisman concludes: “America’s growing libidinous pathologies…taught in schools…and reflected in our fine and popular arts, the press, law and public policy largely mirror the documented sexual psychopathologies of the Kinsey team itself.” (Kinsey: Crimes and Consequences)
HEFNER’S DEBT TO KINSEY
The Kinsey Report inspired Hugh Hefner to start PLAYBOY in 1953. Hefner said the Kinsey Report “produced a tremendous sexual awakening, largely because of media attention…I really view Kinsey as the beginning. Certainly, the book was very important to me.” With messianic fervor, Playboy took its message of sexual freedom to the American male who, in the 1950’s and 1960’s, still consecrated sex for marriage.
But the freedom was illusory. Playboy’s aim, the aim of all pornographers, was to hook men on the glossy fantasy. To do this, they had to prevent them from finding true satisfaction in marriage.
In Reisman’s words, “Playboy was the first national magazine to exploit college men’s fears of women and family commitment. Playboy offered itself as a reliable, comforting substitute for monogamous heterosexual love.” (Soft Porn Plays Hardball, p 47)
Thus “sworn enemies,” Playboy and feminists, found common ground in their hatred of healthy heterosexuality expressed in the nuclear family. As a result of the (homo)sexual revolution, society now suffers from epidemics of family breakdown, pornography, impotence, child sexual abuse, sado sexual violence, teen pregnancy, a cocktail of STD’s and, of course, AIDS. The birthrate has plummeted by 60% since 1960 and is now below replacement level.
HOMOSEXUALITY IS NOT HEALTHY
Homosexuality is a developmental disorder caused when a male child fails to bond with his father. Psychologist Richard Cohen, in “Coming Out Straight: Understanding and Healing Homosexuality” (2000) argues persuasively that, by having sex with men, the adult gay is trying to compensate for father-love denied in adolescence. Cohen was a homosexual himself and is now married with three children.
He attributes lesbianism to a woman’s reaction to being rebuffed or abused by her father. He has cured hundreds of homosexuals but is under constant attack for undermining the gay political agenda, (i.e. redefining societal norms.)
Psychiatrist Jeffrey Satinover has pointed to another cause of homosexuality. A 1990 survey of 1000 gays shows that an older or more powerful partner physically assaulted 37% of them before the age of 19. (Homosexuality and American Public Life, 1999, p.24). In addition, according to Anne Moir in “Why Men Don’t Iron,” some men may be “born gay” due to fetal hormone imbalances. They seem to be a minority.
In 1973, the Rockefellers bullied the American Psychological Association into proclaiming homosexuality normal. Together with feminists (who believe heterosexuality is inherently oppressive), gays began to dismantle all heterosexual institutions: masculinity, femininity, marriage, the family, the boy scouts, sports, the military, and the education system.
Using their control of the media, the Rockefellers (i.e. Illuminati bankers) largely dictate our cultural sensibility. They are responsible for the obsession with pornography and the occult that pervades television, music videos and the Internet.
This state of arrested human development is characteristic of homosexuals who cannot form long-term relationships with the opposite sex. With straight women acting like men and vice-versa, with TV and schools promoting it, we are being turned into homosexuals.
SHOCK TACTICS
Gay activists talk about “normalizing” their gross-out sexuality and “de-sensitizing” straights by flaunting it. I was livid when I took my 10-year-old son to see Adam Sandler’s movie Billy Madison and heard one teenage male youth in the film casually ask another: “Would you rather bone Pamela Anderson or a young Jack Nicholson?”
Just as Communists once conned do-gooders to think radicalism was chic, gays define trendy for gullible liberals today.
Gay and feminist activists think traditional morality was invented to perpetuate an unjust status quo. In fact, morality is the accumulated wisdom of mankind regarding what is healthy and fulfilling. Perversion is the deviation from what is healthy.

(Relic of bygone days?)
Heterosexual morality places sex in the context of love and/or marriage because it “humanizes” the sexual appetite. It ensures that the most profound and intimate physical act between two people expresses a commensurate emotional-spiritual bond. This is the only way sex can be truly satisfying for both men and women. It is also healthy for society because it provides for the natural and necessary outcome of sexual love, children.
With Hugh Hefner’s help, Alfred Kinsey detached sex from love and procreation. He reduced it to titillation like an amusement park ride, or relief like urination.
Homosexuals seem to champion anonymous bathroom sex; some fornicate through a hole in a cubicle wall. Most have 10s -100s of partners each year. In less extreme form, this is the model heterosexuals have adopted. Recently a social columnist enviously described straight couples she knows who have just broken up: “they’re out partying, having the time and the sex, it seems of their lives.”
In conclusion, the “sexual revolution” was really a triumph of perverse homosexual norms and values. The gay-feminist agenda is to redefine healthy as pathological and vice-versa and they have succeeded.
In forty short years, almost all sexual constraints have dissolved and heterosexual society is reeling. The cultural and social breakdown will only get worse. We need a counterrevolution.
___
http://www.henrymakow.com/playboy-and-the-homosexual_re.html